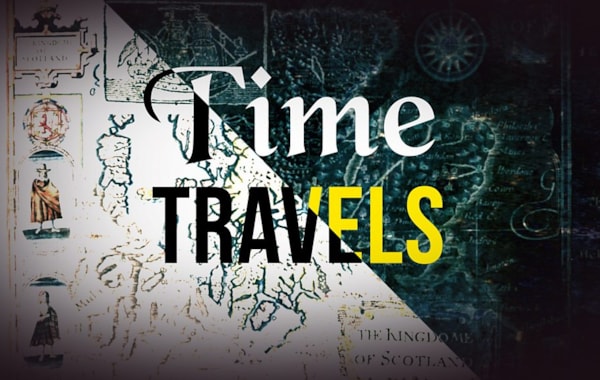 A new series of the history podcast Time Travels starts on 22 November 2020, with topics including the lively court of James V, moral panic in 60s Scotland and Orkney 'witches'.

In each episode of Time Travels, Susan Morrison explores the rich and sometimes murky depths of Scotland's past.

The new series features leading historians, who will cover a wide range of topics:

(2) Dr Christine Whyte of Glasgow University on what happened to ‘Liberated African’ children. Many Scots prided themselves on being ardent abolitionists who supported the missions of the Royal Navy to intercept slave ships, but the rescued children (about a third of those aboard) weren’t reunited with their mums and dads and sent home - instead they met a lottery of fates.

(3) Dr Bess Rhodes of St Andrews University on the Reformation in Fife and its effects. Statue smashing was a favourite intervention of the 16th century Scottish Reformers who also liked to burn religiously-unsound artworks and chop them up - but what did people feel about that at the time, and what did the authorities mean to do about it?

(1) Kristin Hay of Strathclyde University: trouble brewed in the 1970s when unmarried women started to ask for the pill - the Church of Scotland was shocked and doctors could be obstructive.

(2) Dr Mikki Brock of W&L University - Sleeping with the English in Cromwellian Ayr.

(1) Dr Jack McLachlan, Lost Lochs of Fife - what the beetles tell us.

(2) Dr Christine H Whyte, Human leopards - a witch-hunting type story where the 'Human leopards' are the 'witches' and Scottish trained doctors were writing what amounted to demonology in the 20th century in Sierra Leone.

(3) Dr Amy Blakeway of St Andrews University on James V - Parrots, dogs and spectacle - why James V should be remembered for more than being Mary Queen of Scots’ father who promptly dies after her birth.

(1) Dr Katie Barclay University of Adelaide - how 17th-19th century Scots living in cramped tenements and tiny but and bens made their own privacy,  and how they coped when serious crimes intruded on neighbourly bliss.

Born to “recaptives” (both his mother and father were liberated while crossing the notorious “Middle Passage”) James Horton is considered Edinburgh University’s first African graduate.

(2) Ashleigh Angus: Orkney witches and the rebellion - the tale of Elspeth Reoch and Jonet Irving.

(3) Kristin Hay:  Living with the abortion act of 1967, why the Scots experience was unique.

Visit BBC Radio Scotland here for the latest episodes, or go to BBC Sounds and look for Time Travels.

Each of the episodes will be available as a podcast after transmission and these will form an archive that will be permanently available.

Please note that episode details are subject to change, particularly for the later dates. Check the Time Travels website for the latest news.