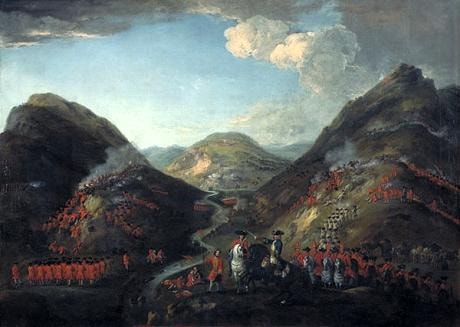 Jacobite and Spanish troops were defeated by government forces at the Battle of Glen Shiel on 10 June 1719.

Jacobite and Spanish troops were defeated by government forces at the Battle of Glen Shiel on 10 June 1719. The battle, which is sometimes referred to as 'The Nineteen' saw around 1,000 Spanish and Jacobite soldiers pitched against 850 government infantrymen with 120 dragoons and mortar batteries.

Around 100 Jacobite and Spanish men were killed, with 21 government troops dead. Three Jacobite commanders - Lord George Murray, William Mackenzie and Robert Roy McGregor - were seriously injured and many of the Jacobites fled in the aftermath of the fighting, to escape execution. Almost 300 Spanish soldiers were taken prisoner and later released to return to their home country.

The site of the battle is included in the Inventory of Historic Battlefields in Scotland.