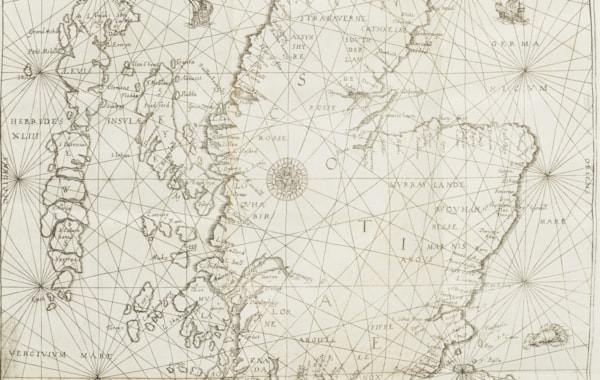 The historic map, known as The Nicolay Rutter, is said to be the oldest accurate chart of Scotland, made from the voyage taken by King James V around Scotland in 1540.

The oldest accurate map of Scotland set to fetch £20,000 at auction Images

The rutter will be sold in Edinburgh by Lyon & Turnbull on 19 February 2020 and is expected to fetch between £15,000-£20,000 because of its importance to map making and political history.

This 'remarkable work' was by far the best outline map of Scotland for a very long time, considerably more accurate than later 17th century maps. The sale is expected to attract bidders from around the world.

Explaining the background to the map, Lyon & Turnbull write: King James V set out in 1540 with a group of nobles to subdue the Lords of the Western Isles. They visited Skye, Orkney, Lewis, Ross and Kintail finally anchoring off Dumbarton, where the king left the fleet and rode back to Edinburgh.

The true originator of the work was Alexander Lyndsay, although it was a French map maker, Nicolas de Nicolay who copied it. The rutter was said to have been 'mysteriously obtained' by the English and given to the French King who immediately used it to avenge the murder of Cardinal Beaton of St Andrews.

A huge step forward for mapping

Simon Vickets, Book Speciaist at Lyon & Turnbull said: “The rutter take its name form the French word routier and is a set of sailing directions.

"Nicolay’s map marks a huge step forward in the accuracy of cartography, not only is the shape of Scotland instantly recognisable, it is much more accurate than the later Gordon Blaeu map of 1654 and the Moll map of 1714.”

QUICK LINK: For the latest history & archaeology news, sign up for our free newsletter