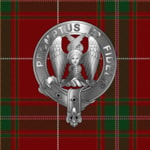 Clan Society of the Border Reiver Clan and Family of Carruthers

The Clan Carruthers Society International (CCSI) was founded in January 2017 and is officially recognised by the Chief of Carruthers; Dr Simon Peter Carruthers of Holmains, as representing the worldwide Carruthers family. It is non-commercial, apolitical and non-partisan and is open to any member of the international Carruthers family and derivatives of that name.

The Society is based in the United Kingdom, but is represented by an international Executive Council with representatives from Scotland, England, Australia, Canada, Europe and the USA.