Dr Tom McKean shares new research into the Scottish, English and Irish roots of the 19th-century American Murder Ballads that reached an audience of millions

Johnny Cash, The Dixie Chicks, The Grateful Dead, Bruce Springsteen – they’ve thrilled millions with stories of wicked violence and cruelty. What made it all right was that it was all in song, part of America’s long tradition of murder ballads.

Murder ballads tell gruesome tales of violence, often hideous, sexually motivated crimes against physically and socially vulnerable young women. Songs are one of the ways that we have to speak about the unspeakable, to tell the untellable. In their stylised language, like literature and poetry, they can tell stories and broach subjects that are hard to talk about in speech and conversation.

Murder ballads are usually moralising confessionals in which the murderer confesses on the gallows – “Do not do as I have done” – but sometimes they try to evoke sympathy for the wrongdoer himself (and it usually is himself). Beneath this apparent morality, however, they aim to titillate, entertain, and, most importantly in days gone by, sell copies.

Yet it’s a genre with distant origins, having its roots in the folk traditions of Scotland, Ireland, and England, long before crossing the Atlantic to find its way into country music, bluegrass, rock, and pop. And they’re remarkable partly because many contemporary examples are so close in subject and form to songs from hundreds of years ago, thanks to universal themes of love, betrayal, and treachery.

The classic ballads of tradition, some of them centuries old, don’t tell us what to think or how to feel; there is no moralising. Instead, the story is allowed to unfold, the horror of it hitting us when we inhabit the characters’ world and imagine the circumstances described. In Edward, or Son David, a mother confronts her son, asking him to explain the blood on his sword. After claiming it was that of his hawk, hound, and horse, he finally confesses,

He widna rule by me.

In The Bonnie Banks o Fordie, as sung by Dick Gaughan, a man walking through woods encounters three young women, murdering two in turn when they refuse his advances saying,

Oh it’s A’ll no be a robber's wife

You might say that American murder ballads are the descendants of these older tragic songs, but they take as their focus the sensational killings that often begin or end them.

But I pulled a little stick from off the hedge
And struck her to the ground
Until the blood of that innocent
Lay trickling all around.

Down on her bended knees she'd fall
And tearfully she'd cry,
“Oh Jimmy dear, don't you murder me,
For I'm too young to die.”

Often old songs that travel adapt to their new environment, sometimes changing place names to localise them in a new context. In Ireland, The Oxford Girl becomes The Wexford Girl, and then heads to the USA to become The Knoxville Girl, a song closely associated with the 1892 murder of Mary Lula Noel in Missouri, a ready-made vehicle for expressing the horror of a local tragedy. The same tale unfolds, recast by generations of singers. Here’s the Louvin Brothers’ version of those same two verses,

I met a little girl in Knoxville, a town we all know well,
And every Sunday evening, out in her home I'd dwell,
We went to take an evening walk about a mile from town,
I picked a stick up off the ground and knocked that fair girl down.

She fell down on her bended knees for mercy she did cry,
Oh Willy dear don't kill me here, I'm unprepared to die,
She never spoke another word, I only beat her more,
Until the ground around me within her blood did flow.

This is perhaps the quintessential murder ballad, with a story and structure replicated across dozens of songs, and several continents, from The Banks o Reid Roses to The Banks of the Ohio.

Murder ballads are sometimes fiction, lurid stories from the imagination. But all too often, they are based on real events and real people, as in the case of Laura Foster, memorialised in Tom Dooley, a North Carolina song based on the 1866 murder. There were several songs and poems offering different perspectives, but this is by far the best known, and Tom admits up front that he did the deed, here in Frank Proffitt’s version collected by Anne and Frank Warner in 1938,

The song-maker is clear on the moral lesson to be drawn,

Tom Dooley was a hit for the Kingston Trio in 1958 and has been recorded dozens of times since, even though the fatalism of this version is contradicted by widespread legends that Dula sang and played the banjo, protesting his innocence, as we was brought to the gallows. 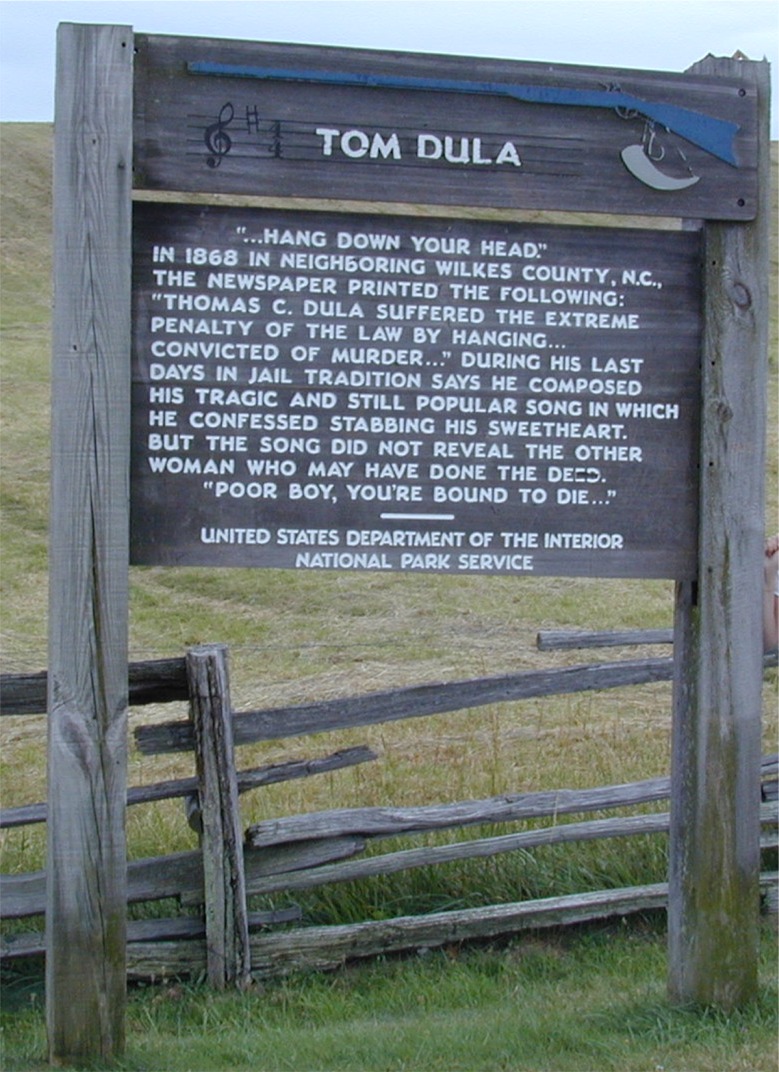 The list of songs based on true-life events is practically endless: Stagolee, Betty and Dupree, Frankie and Johnny, The Ballad of Bonnie and Clyde, Omie Wise, based on the 1807 murder of young Naomi Wise in Randolph County, North Carolina, and Delia’s Gone, one of several songs associated with the 1900 murder of a fourteen-year-old black girl, Delia Green, by her purported lover, fifteen-year-old Mose Houston. It was recorded by Johnny Cash in 1962 and again, as in Dooley, the murder speaks for himself.

Delia, oh Delia
Delia all my life
If I hadn’t of shot poor Delia
I’d have had her for my wife
Delia’s gone
One more round
Delia’s gone.

Popular appeal and a foundation in fact has always been integral to murder ballads, and for the song-makers and printers, that was largely the point – there was money to be made.

The story of Maria Marten

In 1827, the murder of Maria Marten (pictured top) was headline news across England. She met her lover at a local landmark, ‘the red barn’ in Suffolk, expecting to elope, but instead was killed and buried beneath the barn floor. There were songs, plays, and books describing, dramatizing, and sensationalising “The Red Barn Murder” and the broadsides – cheap printed song sheets sold at markets, fairs, and on street corners – are said to have sold more than one million copies. Imagine that – one million copies in a nation only ten times that number in population.

The broadside industry was made possible by cheap printing technology and was the tabloid press of its day, with composers and sellers offering sensational news of the day in song, side-by-side with traditional songs. Even in a population where literacy was not universal, song sheets would sell, with some literate member of the community drafted in to sing the song to the well-known tune named at the top of the sheet. Hawkers, like Aberdeen’s renowned Mussel Mou’d Charlie, would appear in streets and at markets, singing a few lines, and selling the broadsides to customers, who lapped them up with the same eagerness we have for salacious stories in today’s tabloid press.

Indeed, there were similarities, as the songs often appealed to base instincts, featuring sensational, gory details that could be revelled in because they were told in a stylised package like today’s Nordic noir programmes, or murder mysteries.

The classic ballads often feature some kind of retribution for the perpetrator in the end, as in Jeannie Robertson’s Son David,

But I'm gaun awa in a bottomless boat,
And I'll ne’er return again.

Or The Bonnie Banks o Fordie, as sung by Dick Gaughan, in which a man walking through woods encounters three young women, murdering two in turn when they refuse his advances saying,

Oh it’s A’ll no be a robber's wife

The third sister warns of her brother’s wrath,

For A hae brither in yon tree

My brither’s name it is Babylon

An it's he’s taen out his wee penknife

And justice is done. In the end.

The moral of the story?

In the murder ballads, the murderer usually pays the price at the end of the song, often with a gallows confession, a warning to others, and a prayer for mercy. But this was not enough for the Victorians. Their murder songs often include an unambiguous moralising verse or two, as in A Lament for Dr Pritchard, presented in questionable nineteenth-century verse.

Now the dice box of fate it has turned against Pritchard

His time is but short and the moments do fly

For to pardon his sins for the crimes he committed

On the Saviour of man all his hopes now doth lie

Oh think of his orphans you kind hearted people

And I hope there is none so heartless will be

As point with a finger of scorn towards them

And say that their father died on a tree. [i.e., the gallows] 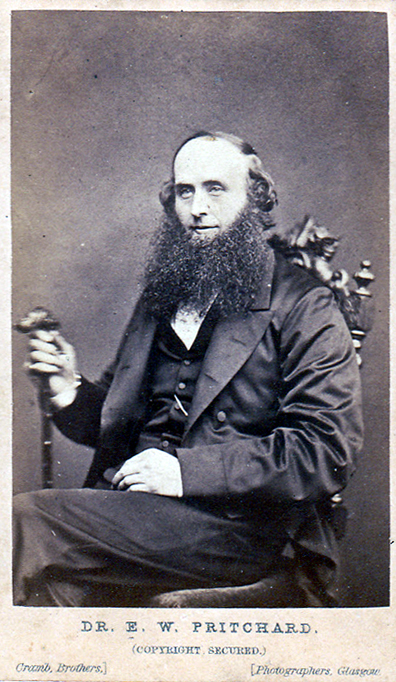 A murder ballad is a tragic tale, with (usually) women succumbing to unquestioned male power, obsession, and even whim. But as it always the case with folk tradition, when a pattern is set up, composers subvert it. As early as the 18th century, some women in song began to take justice into their own hands. In Billy Taylor, a woman in love follows her sailor boy to sea, only to find that he has done her wrong.

The classic Frankie and Johnnie, again associated with several historical murder cases, tells a similar story of a woman’s revenge on a cheating man. Such was the appeal of tales of justice done, that Frankie and Johnnie has been recorded more than 250 times, spawning more than half a dozen films and stage versions or adaptations, including Elvis’s 1966 Hollywood-happy reworking.

Contemporary songmakers have taken up the challenge, too, from Tony Cuffe’s subversion of the broken token song to Peter Kenyon’s woman’s revenge closing for The Jolly Beggar, or Robin Williams and Jerome Clark’s Step it Out, Nancy, in which the heroine is brought to court for her actions:

Nancy said, “I am not sorry,” when the jury heard her tale
“Though he rots beneath the ground and I shall rot in jail”
There in the crowded courtroom, twelve good men took their stand
Said, “We will not hold you, Nancy, for killing that wealthy man.”

Dennis Linde’s Goodbye Earl, a hit for The Dixie Chicks in 2000, celebrates the happy life a woman builds after poisoning her brutally abusive husband and hiding his corpse, and says it well as regards the villains of these songs,

Well, the weeks went by and spring turned to summer
And summer faded into fall
And it turns out he was a missing person

Who nobody missed at all.

No more does the murderer get his day in court, or his last words upon the gallows. No meeting with his god and saviour, no notoriety through a broadside ballad about his deeds. Instead, all that awaits the perpetrator is the anonymity of disappearance, becoming somebody “who nobody missed at all”.

These songs, which speak of universal man’s inhumanity to (wo)man, travelled with those who made the journey to the new world and readily took root in communities all through North America, where song and music were a means of expression, relief, and escape from a hardscrabble existence.

Human nature is a constant and through the centuries, songs have given voice to things we cannot discuss and can’t express any other way. We are entertained and titillated, to be sure. But we can also encounter the most elemental parts of our existence, both exalted and desolate. And through them, we can find some comfort, whether through sharing an experience with one of the characters, or through relief that there, but for the grace of god…

Click here for details of an Edinburgh Festival Fringe play on the ballads.