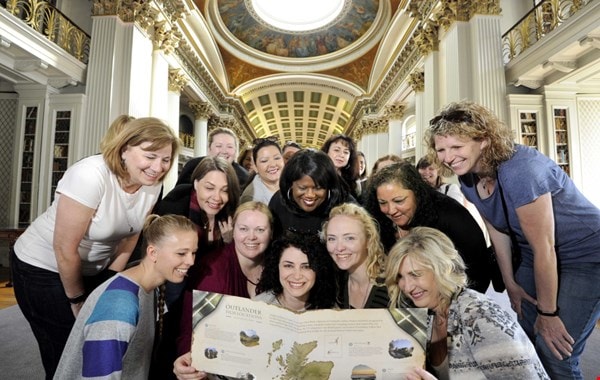 The Outlander-inspired tour was organised by travel agents Spirit Journeys in partnership with popular US-based fan podcast, The Outlander Podcast. 28 Outlander fans recently toured locations across Scotland used in the show, and sites linked to the real history of the Jacobites.

The new locations for Season Three of Outlander are:

Locations already on the map that feature again in the third season are Gosford House and Hopetoun House.

Vincent Guérin, Director at The WS Society, owners and operators of the Signet Library, said: “Hosting the Outlander television production was very appropriate for the Signet Library, the building being home to the Writers to the Signet, a uniquely Scottish category of lawyer whose name comes from the sovereign’s seal in Scotland used since at least the 14th century.

“Outlander's character Ned Gowan is a lapsed Writer to the Signet, or WS, so even though in the series Lord John Grey was hosting his guests at a governor's ball, for us it felt like Ned Gowan WS was indeed throwing the party.”

Outlander is produced by Tall Ship Productions, Story Mining and Supply Company, and Left Bank Pictures, in association with Sony Pictures Television. Outlander is available in the UK on Amazon Prime Video. Season 2 will be coming to More4.

The map, which features more than 36 Scottish locations used in the hit show, is free to download at VisitScotland and a printed version will be available in select VisitScotland iCentres and featured locations.