Douglas, set just off the M74 Junction 11 has a rich history linked to the Black Douglas Clan. This walk explores part of the village, the parkland, a WW2 site and Memorials. Some of the information below has been gathered from the many wonderful public information boards and plaques that are situated around the town - this information is indicated below in italics.

Start Point: Carpark on the corner of Nursery Avenue, Douglas 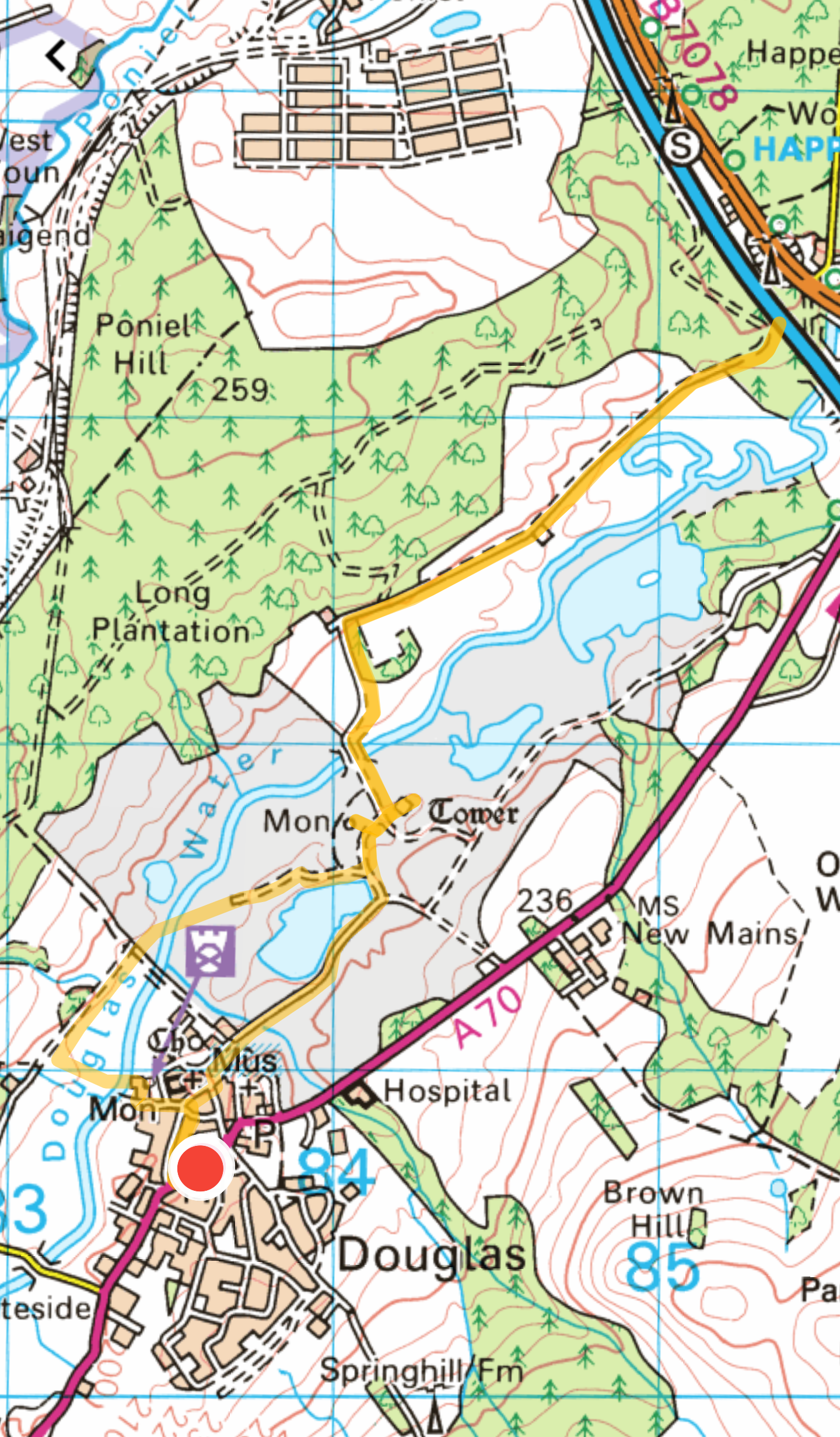 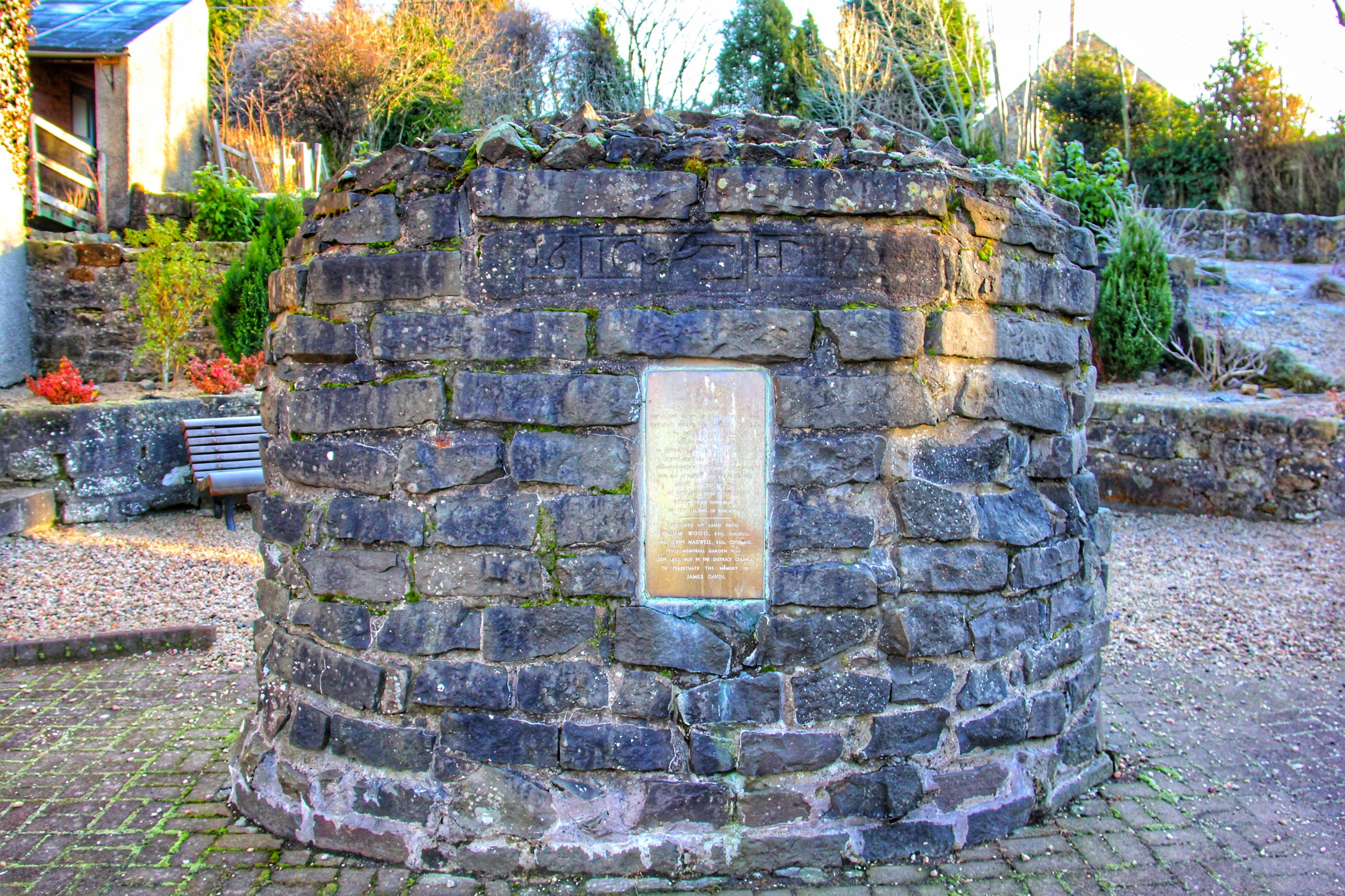 From the small car park on the corner with Nursery Avenue turn left onto the A70 then head right down the Main Street.

About halfway down on the right is a memorial which marks a grim incident from history. It consists of a cairn with a plaque surrounded by pavement slabs with images carved by the local school children. Behind the memorial is a garden.

A hero of the covenant he incurred the special enmity of Claverhouse, who wantonly severed the ears from his head with Gavin’s own shears about the year 1684. To commemorate and perpetuate the brutal outrage Gavin carved the stone, which is set into the Cairn and put it above the door of the house erected by him on the site. Years after his return from banishment to the island of Barbados.’ - By gifts of land from William Wood Esq, Douglas, and John Maxwell Esq, Clydebank. Memorial garden has been laid out by the District Council to Perpetuate the Memory of James Gavin. 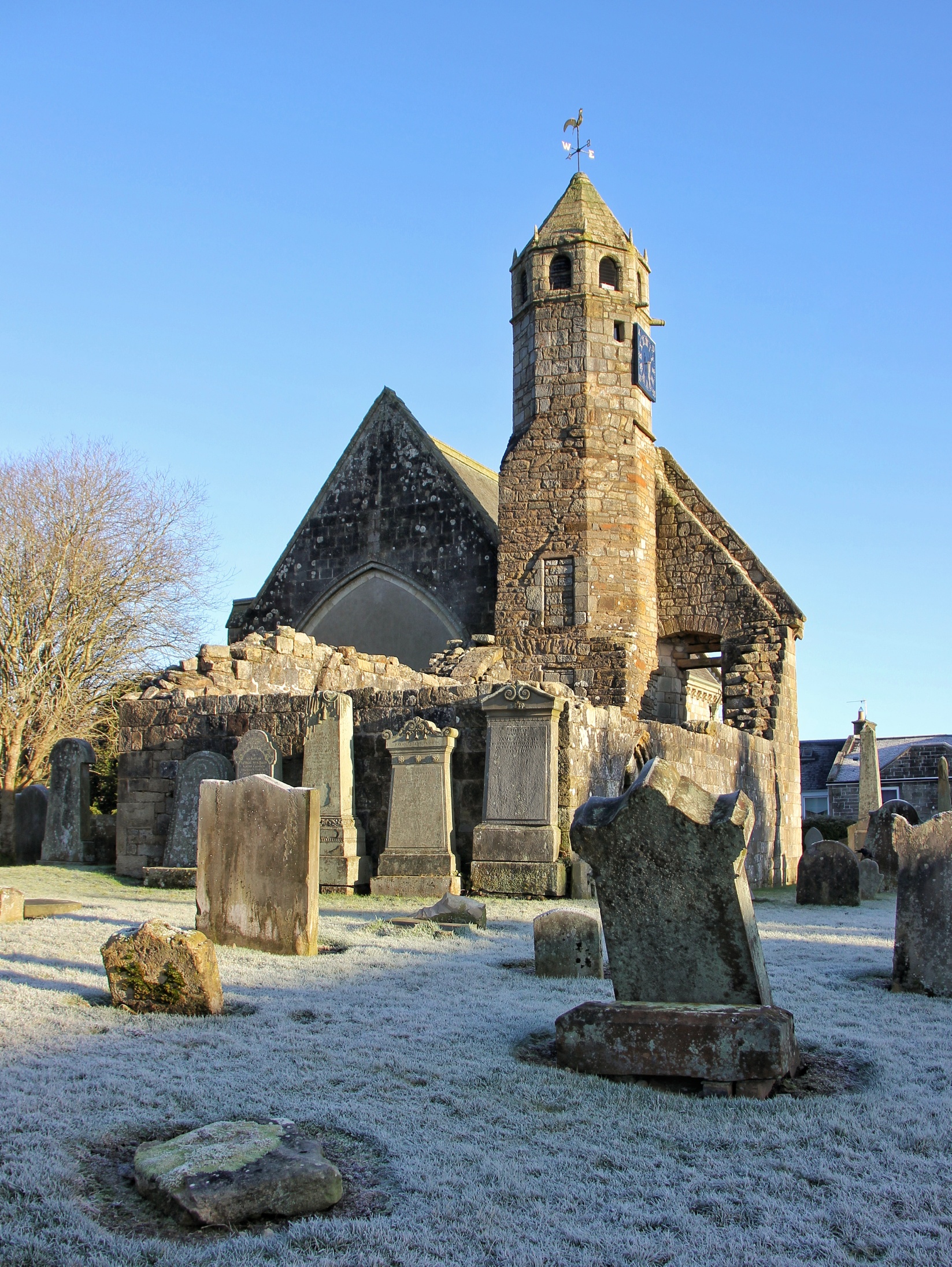 Continue down Main Street to explore St Bride’s Church, the mausoleum of the Black Douglases. The Douglas Heritage Museum is situated nearby at St Sophia’s Chapel and is worth a visit.

The ruin was once the parish church of Douglas. The remains consist of the choir (housing the altar) and the south aisle of the nave – both late 14thcentury in date with a clock-tower added in the 16thcentury. The clock, dating from 1565, is probably the oldest working in Scotland. The choir was re-roofed in the 19th Century.

Douglasdale was the original power-base of the ‘Black’ Douglases’. Modest landowners in the 13th century, they gained enormously through their support of Robert the Bruce during the Wars of Independence with England in the early 14th century. By 1400, they were the most powerful family in southern Scotland. But this position brought them into conflict with the Stewart King. James II, and in 1455 they were overthrown.’

Their castle at Douglas was finally destroyed by fire in 1755, but a tangible reminder of them still exists within, for the Parish Church became their Mausoleum. Three fine wall tombs survive in the choir, together with memorials from more recent times.

Continue Northeast down Main Street to reach the lodge and enter castle policies. 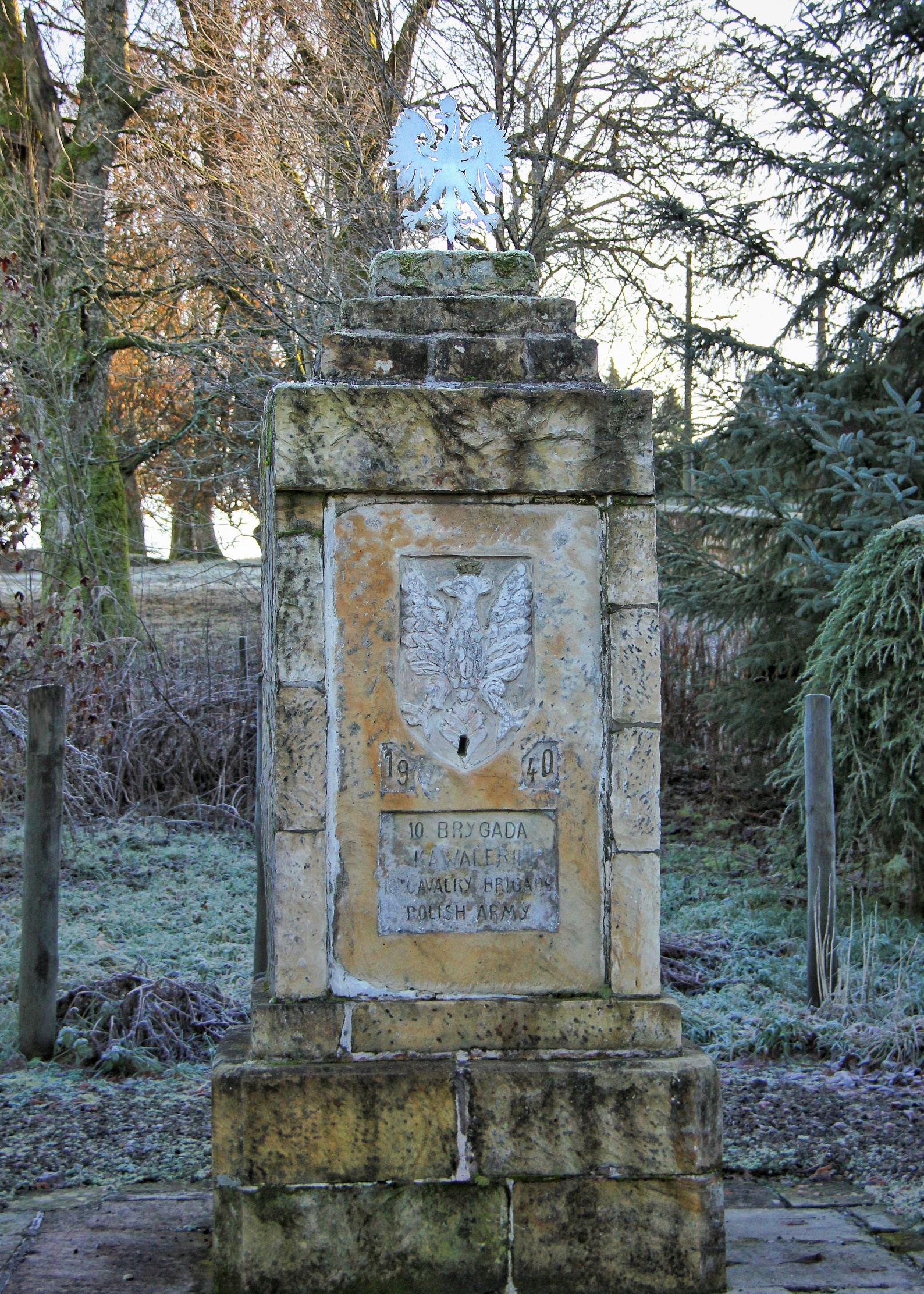 Just before you enter the Douglas and Angus estate parkland on your right stand three monuments.

When Germany invaded France in the Summer of 1940 the Polish soldiers who had fled from their homeland were evacuated to Britain. Many of them were welcomed to the village of Douglas. There they settled into village life and made long lasting friendships.

Using some of their many talents, the Polish Soldiers constructed three monuments as reminders of their time in Douglas. 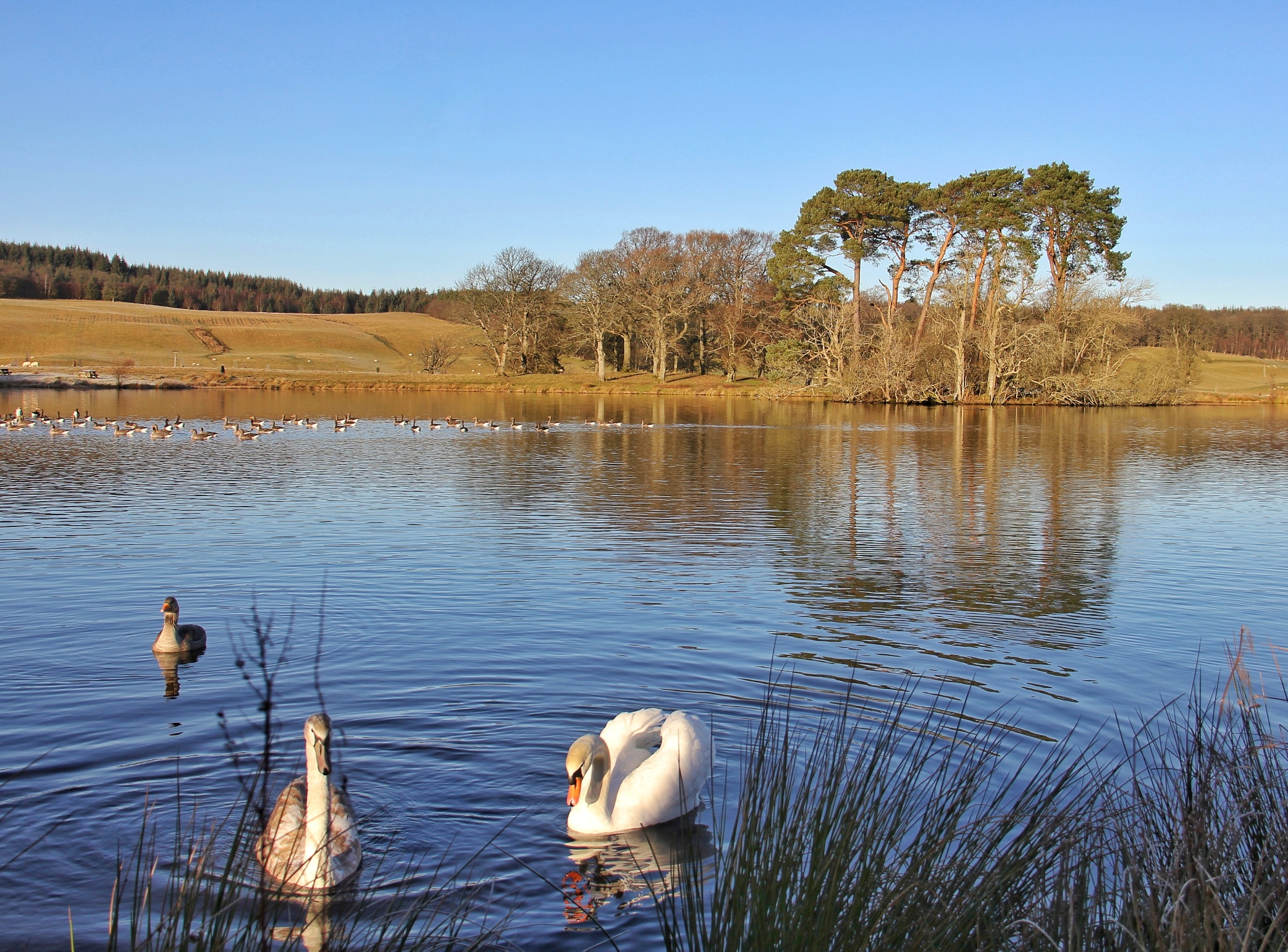 Follow the path onto the Douglas and Angus Parkland Estate and around the Southside of the very picturesque Stable Lake.

Stable lake was established many years ago, its name taken from the stables that sat at its north side.
Used for fishing by the local community during the coarse fishing season, and for curling by the Douglas Curling Club in the winter (when the lake freezes). There is also an abundance of wildlife and waterfowl here to admire. 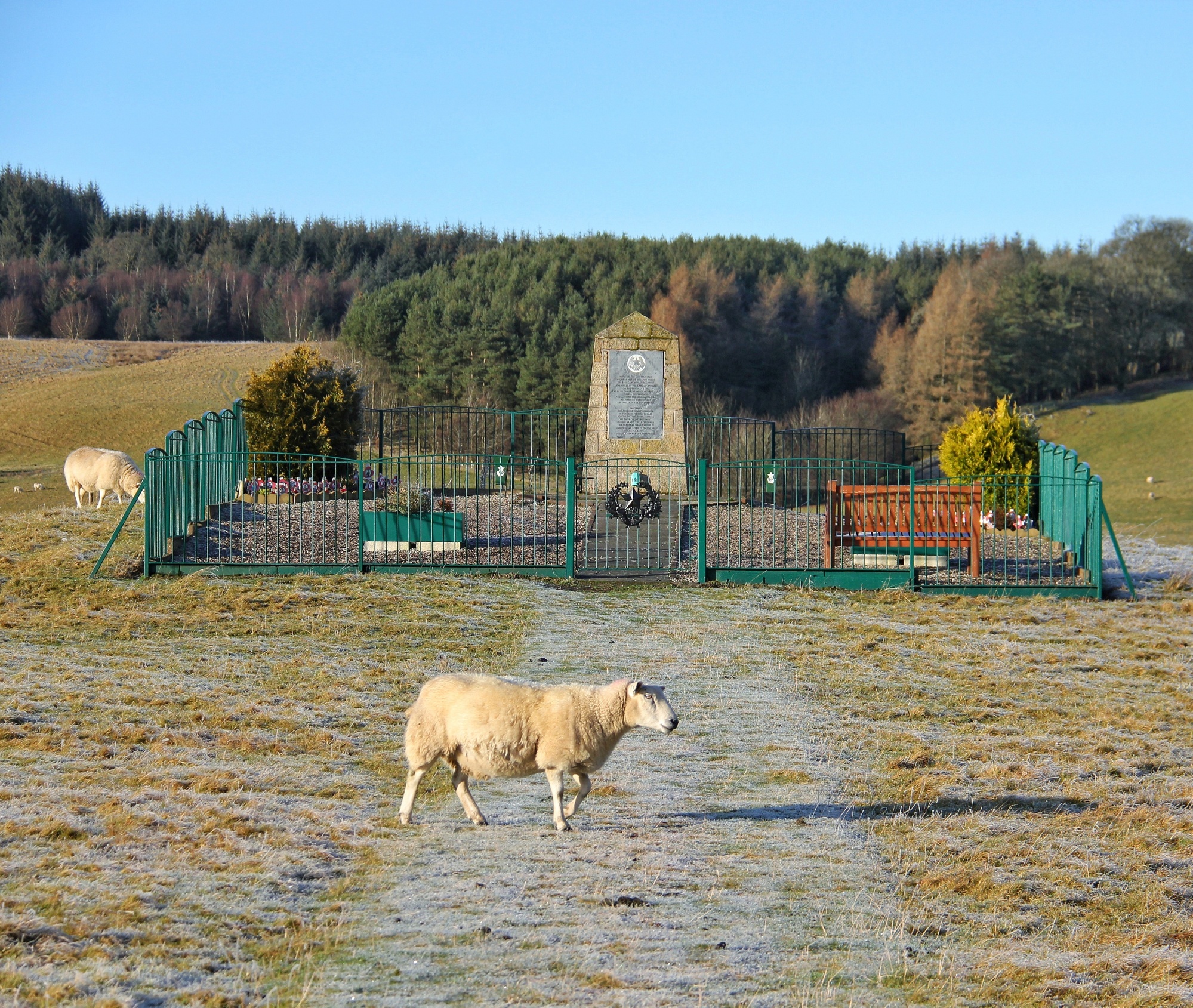 Just past Stable Lake heading towards the ruined Castle Tower, which is clearly visible ahead, stands a memorial.

A memorial stands in the Douglas Estate on the 14th May 1968 within a mile of the spot where the 26th Cameronian regiment was raised by the Earl of Angus on the 14th May 1689. The 1st Bn Cameronians (Scottish Rifles) held a conventicle and lowered the regimental flag to mark its disbandment on orders of the Government.

Once you have viewed this continue and explore the castle tower. 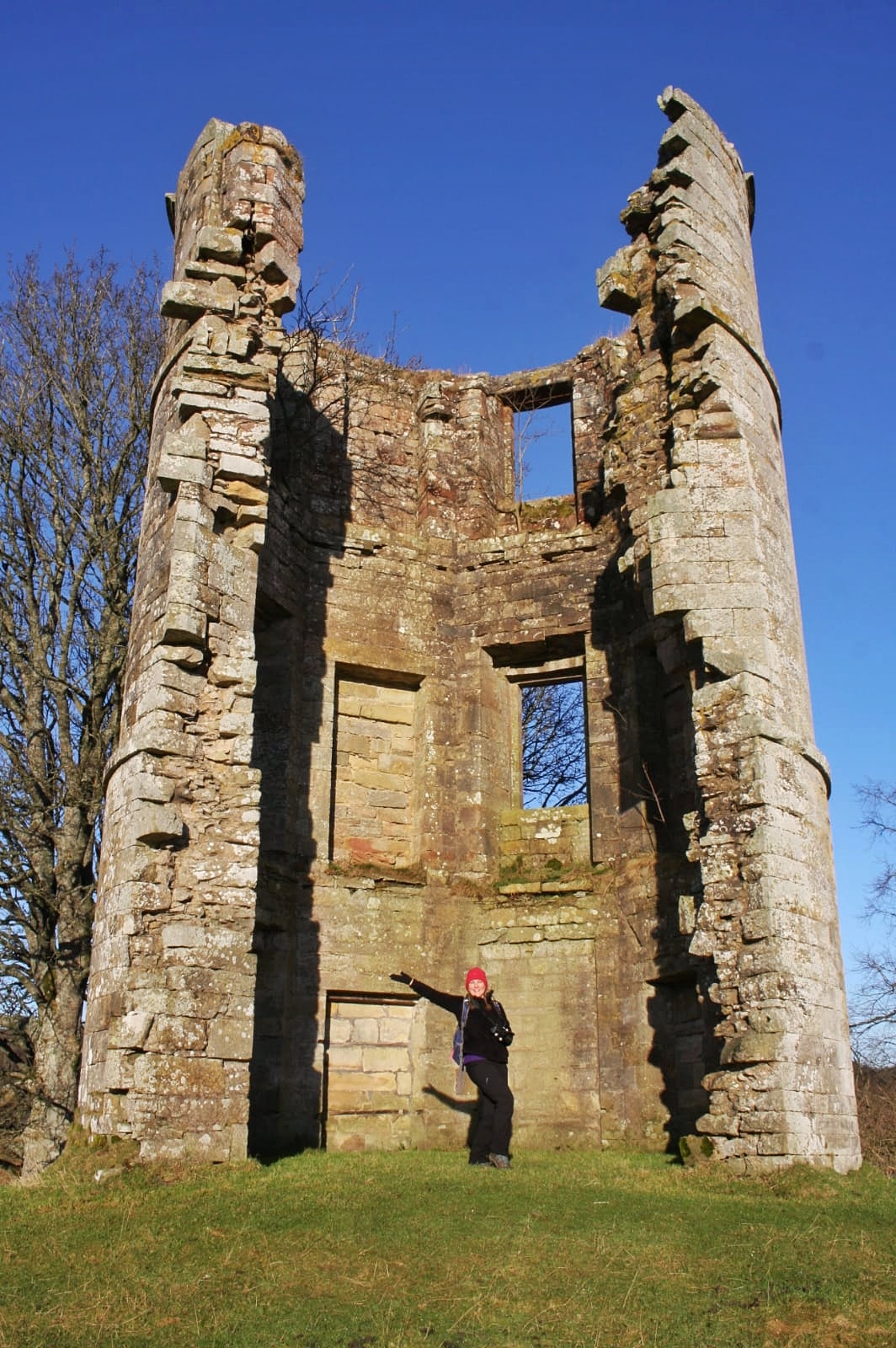 The first mention of Douglas Castle in historical documents is 1288 when Duncan, Earl of Fife's murderer was incarcerated there. The castle was fought over many times by the Scots and the English as well as by feuding Scottish nobility. Bonnie Prince Charlie stayed overnight at Douglas Castle on his way to defeat at Culloden.

Douglas Castle was a stronghold of the Douglas family from medieval times to the 20th century. The first castle, erected in the 13th century, was destroyed and replaced several times until the 18th century when a large mansion house was built in its place. This too was demolished in 1938, and today only a single corner tower of the 17th-century castle remains.’

The castle was used by Sir Walter Scott as Castle Dangerous in his novel of 1831, his last book.

At the ruined tower (Castle Dangerous) go to the downhill and cross the nearby iron bridge. Follow the path past Garden Cottage and it then bears right to follow the tree line of the Long Plantation on your left and the Douglas Water on you right. 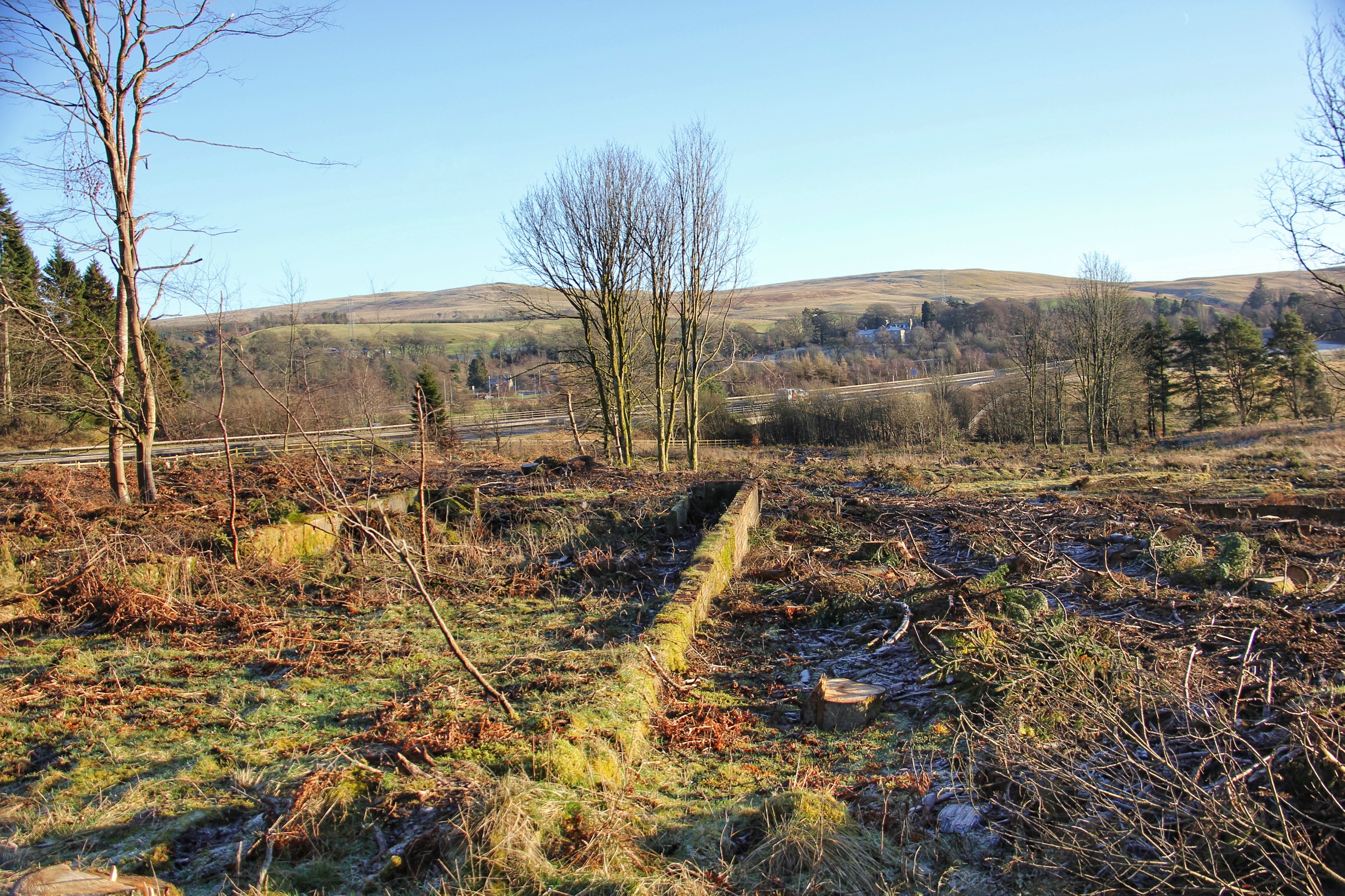 The surrounding trees have had recent logging excavations and it now allows you to get a better view of the remains of the brick buildings and size of part of the site.

The Prison of War camp dates to WW2 and consists of a complex of three camps; the main camp is to the W and is set in a large rectangular area. The later insertion of the M74 destroyed the other two camps and possibly compromised the easternmost corner of the central camp. The central camp currently comprises a series of brick and concrete bases which formed the base for the Nissen huts that were used to house Italian and German prisoners of war. 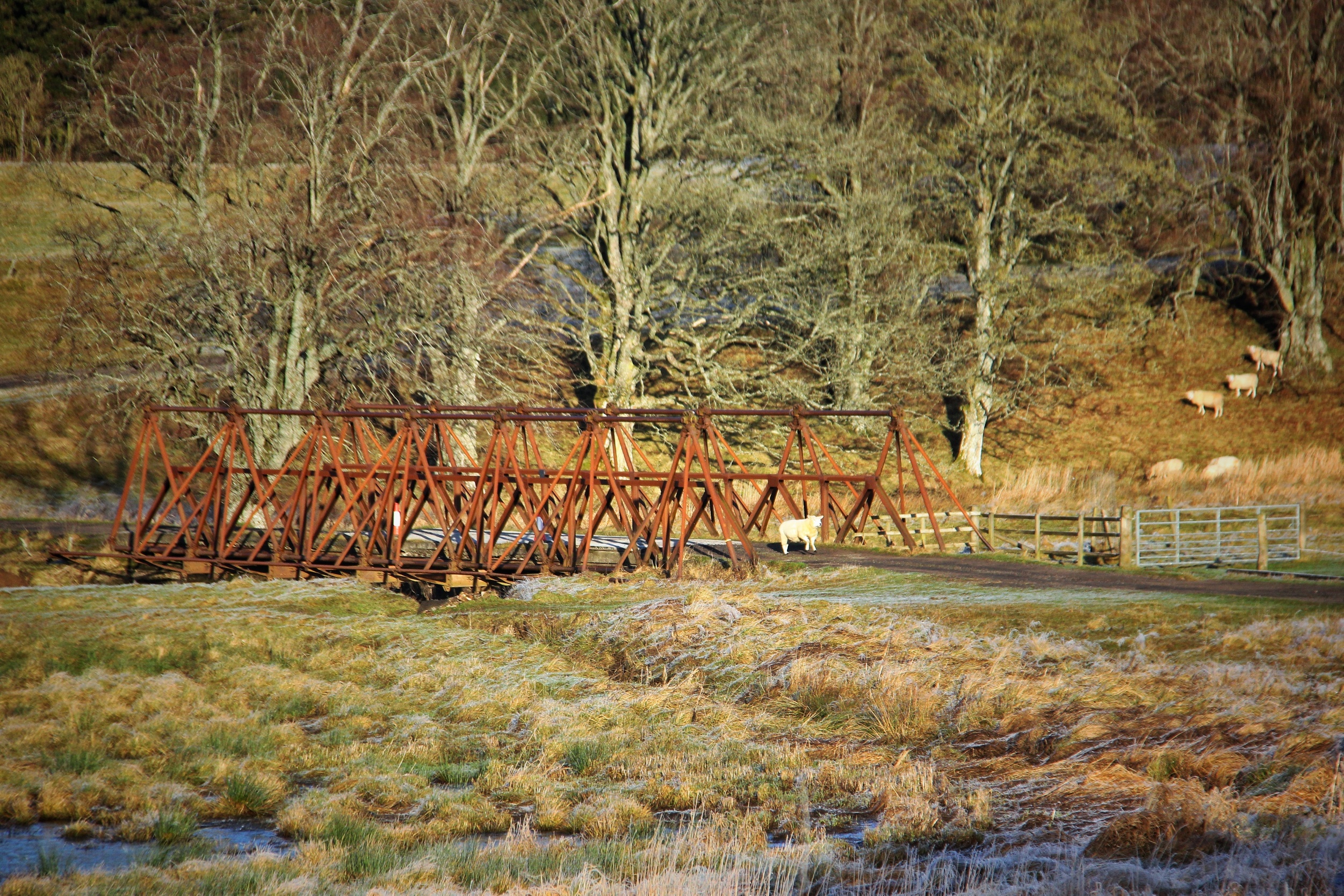 The Douglas Water runs through the beautiful valley starting from the hills to the west right through to where it joins the famous River Clyde just east of Sandilands.

Return the way you came but this time continue your walk around stable lake on the north side.

Turn right at the Lodge following close to the Douglas Water and continue across the recreation field. On the nearby hillside is the statue of James Douglas. 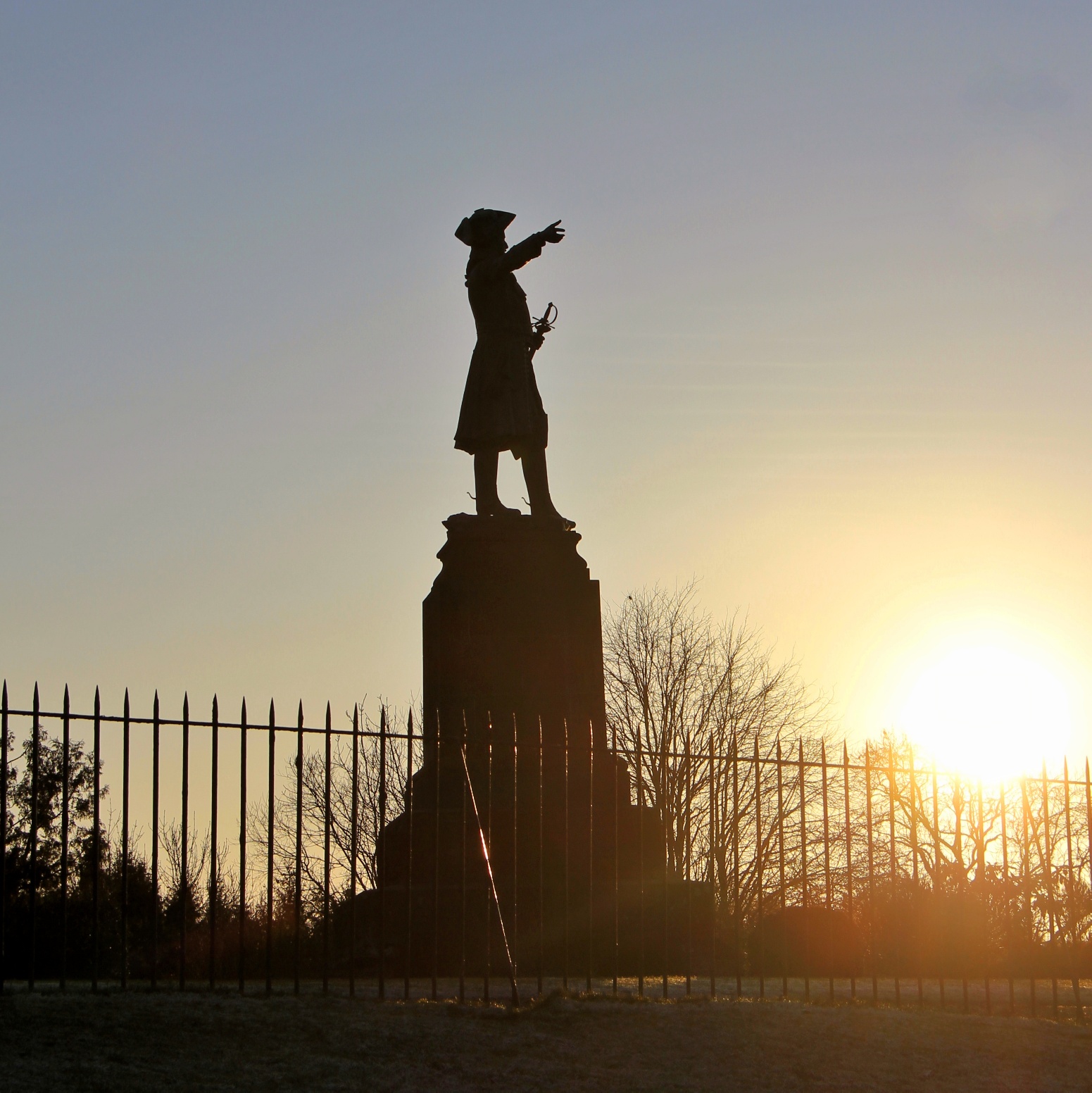 ‘Cameronians’ had existed prior to this as a band of followers of Richard Cameron ‘The Lion of the Covenant’. As Covenanters, they had rebelled against the king for the right to follow their faith and resembled a Presbyterian congregation more than a military unit.

The Statue depicts the regiment’s first colonel, James Douglas, Earl of Angus, pointing to the surrounding hills where he was able to raise so many loyal men. Just three years later Douglas was killed, leading his men into battle against the French at the Battle of Steinkirk (Flanders).

The Cameronians went on to give distinguished service in every major campaign of the British Army for 279 years, The Memorial was built in1892 to mark the regiment’s bi-centennial.

Visit the Douglas Heritage Museum or Low Parks Museum in Hamilton to find out more about the regiment’s rich history.’ - The National Trust for Scotland.

Return onto Main Street and back to the carpark before heading off towards the Motorway at Cairn Lodge Services to see the nearby Gatehouse in fantastic condition. 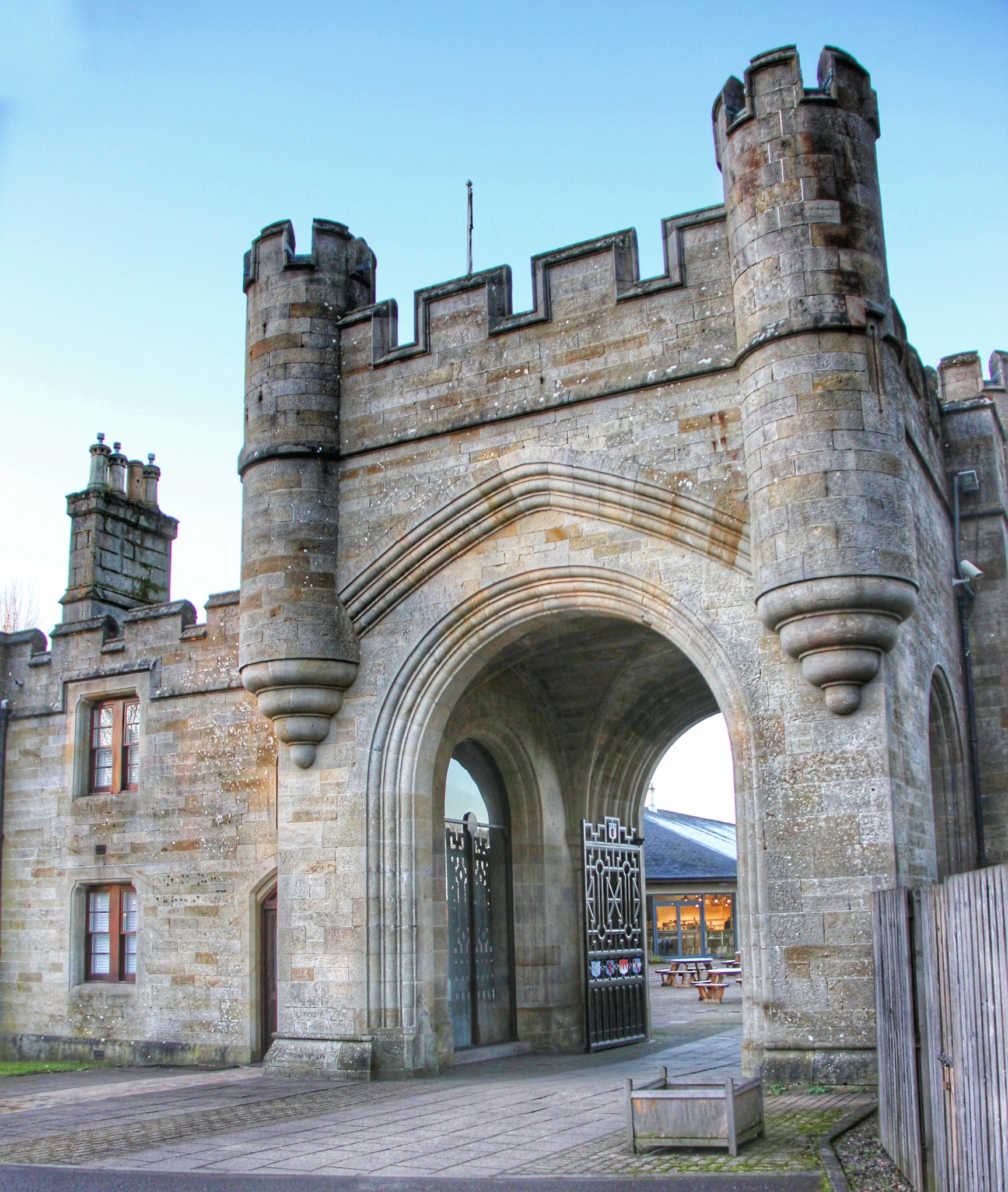 At Cairn Lodge Services a short drive away is the impressive north lodge building which marks the gateway to Douglas Castle, two miles away, which is now cut through by the M74.

Karen is a Black Country girl who moved to Scotland in 1999. After bringing up a family over the last few years she decided to start exploring, in more detail,  areas nearby to where she lives in East Kilbride.

Here, she explains more about her work: "As a Library Assistant and Explorer I took a real interest in local and nearby history. I especially like NLS Maps and seeing old photos and comparing how these areas look today. Life is one big adventure, Go and Explore it"

Taking photos en-route and sharing the walks online was what she wanted to do to inspire others to get out and start exploring too.

Her photography is a hobby and she is often attending local Community & Charity events.