Paul Murton shares his experiences of visiting the tiny Hebridean isle of North Rona, a 3.5 hour sail from the nearest land.

The unbelievably remote and tiny island of North Rona lies 45 miles off the northern tip of Lewis in the Outer Hebrides. Before it was finally abandoned in the 1830s, North Rona was the remotest island community in Europe.

For someone like me, who has an almost obsessive fascination for far flung islands, the thought of visiting such a place is irresistible, especially so since my imagination was fired many years ago after reading a fictional account of a landing there in Neil Gunn’s celebrated novel The Silver Darlings, which describes how its hero Calum is blown off course in a fishing boat, and forced to climb the cliffs of North Rona in search of fresh water.

North Rona was immediately on my wish list of places to visit for the series Grand Tours of the Scottish Islands, but for two years in a row, plans had to be scrapped because the weather during our filming block was successively too rough to make a landing there possible. But this year, the gods were with us.

On a morning of breath-taking beauty, we left the tiny port of Miavaig on Lewis. Out boat looked more that adequate for the job -  a 450hp seaworthy launch to make the 3.5-hour trip. But despite crystal blue skies, the seas grew rougher the further north we travelled. Before long, we were out of sight of land, and some members of the film crew were beginning to feel a little worse for wear. Having failed to find their sea legs, sick bags were deployed for the queasy couple, who went through a total of 23 out of a packet of 25 disposable bags in the time it took to get to our destination…

Because of the rough conditions, our journey time was nearly double what we expected, and it took over 6 hours to reach North Rona, which appeared out of a blue haze like a vision: an oasis of green grass in the vastness of the North Atlantic. Having come this far was one thing – actually landing on North Rona was another. There is no pier or jetty; no beach or sheltered bay; and the green pastures which we saw from afar, sit on top of some spectacular cliffs, which form a defensive girdle of rock and breaking surf around the island. 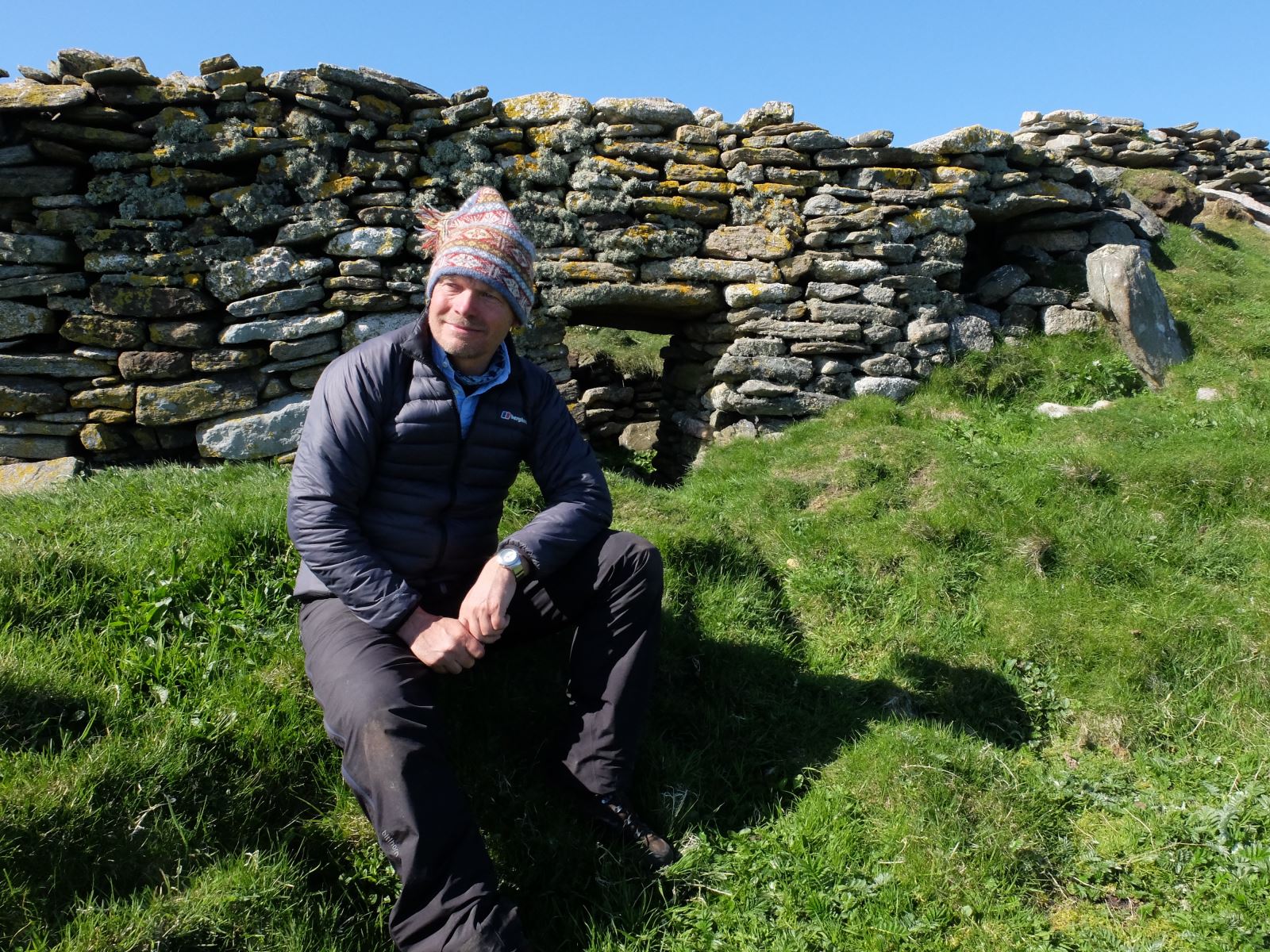 The skipper and our contributor the archaeologist George Geddes both have experience of landing on North Rona and were able to find a relatively sheltered spot, where we made a dash to in a rubber dinghy. Timing the rise and fall of each wave as it lifted our flimsy craft towards the rocks, we jumped ashore and formed a human chain to get the camera equipment safely on dry land. It was then a stiff scramble up rocks and near vertical grass before we were able to take stock.

Far below us, the launch rode at anchor. A voice cracked over the ship-to-shore walkie-talkie. We were given just three hours to complete the filming and get back on board. The boat had to return to Lewis before midnight, so there could be no dawdling or stopping to admire the view.

A short walk of half a kilometre from the cliff top brought us to the boundary of the cultivated land. George described how, over the centuries, all the good soil had been moved by hand from less fertile parts of the island and consolidated in an area around the village. It was a task that must have taken generations. At the same time, the peat which once provided fuel, had gradually been worked out so that there is none left today. This was probably one of the reasons that the village was finally abandoned. With no peat to provide heat and light, life would have been impossible.

Life on the island

To me it seemed incredible that the islanders of North Rona not only sustained themselves, but produced enough to pay rent to their landlords on Lewis – not money, but goods. The island was famous for growing barley (an unlikely crop I would have thought, given the gales and rain so prevalent in this part of the north). North Rona cheese was also considered to be of exceptional quality and much sought after. These, along with feathers, sea foul and sealskins were exported annually from North Rona to Lewis.

As we approached the village, Bonxies – or Great Skuas – dive bombed us; an aerial assault that was an appropriate accompaniment to the story that George was relating. According to historical accounts, in the 17th century, everyone on the island died because of a plague of rats. Their emaciated bodies were discovered in their homes when the factor of St Kilda was blown off course and wrecked on North Rona. He and his crew saved themselves and made their way to the village in search of help, warmth and shelter. Instead, they found death and the decomposing remains of the entire community. A grim find indeed. 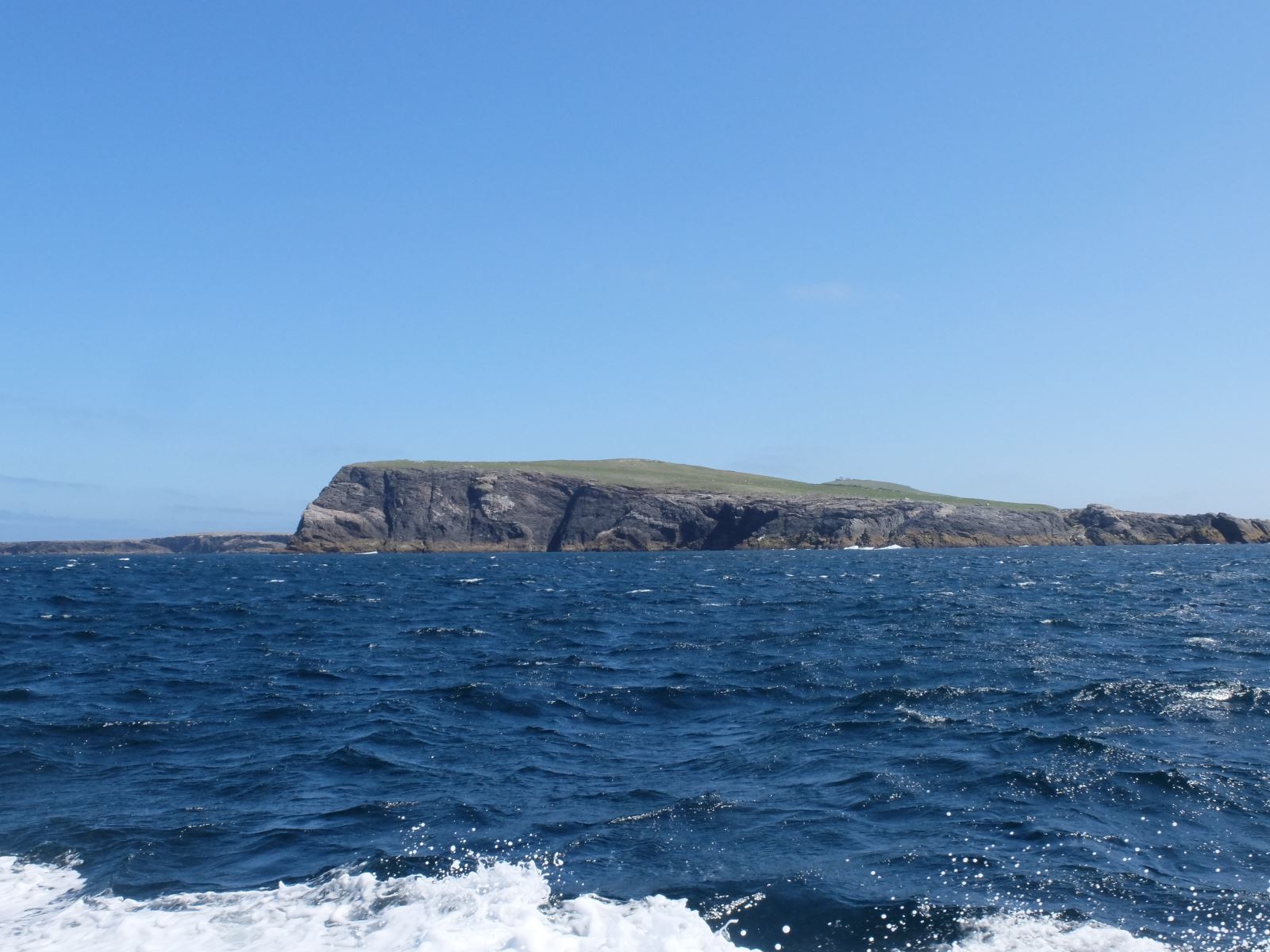 It’s hard to imagine the homes where islanders lived unless you see them. Built into the earth and roofed with turf, they apparently blended into the landscape almost perfectly – the only tell-tale sign being wisps of peat smoke - emerging as if from the ground itself. Today, the homes where islanders lived for generations have been reduced to a few loose stone walls outlining shallow depressions in the landscape.

The next stop on our itinerary was St Ronan’s chapel. Reputed to have been founded by St Ronan, a missionary of the Celtic church, this exceptionally tiny and humble building is thought to be the oldest Christian building still standing in Scotland.

The only way in is to crawl on hands and knees through a doorway of hobbit-scale dimensions. Once inside the gloomy oratory, we disturbed a nesting Fulmar whose defensive projectile vomit was directed towards us. The bird is an odd custodian of this ancient place of worship which has a history of religious devotion that is at least 1,000 years old.

Back outside in the sunlight, we stood in the ancient graveyard and thought of the lives of the people who once lived on this tiny, remote island. Most would have lived and died here without seeing anything beyond the wide horizon, where there isn’t the slightest hint of land in any direction. This thought made the isolation of North Rona seem palpable – a feeling in the pit of my stomach, almost like vertigo when contemplating the loneliness of this wild and improbable place – a pace that people once called home.

See Paul Murton in the BBC One series Grand Tours of Scotland.