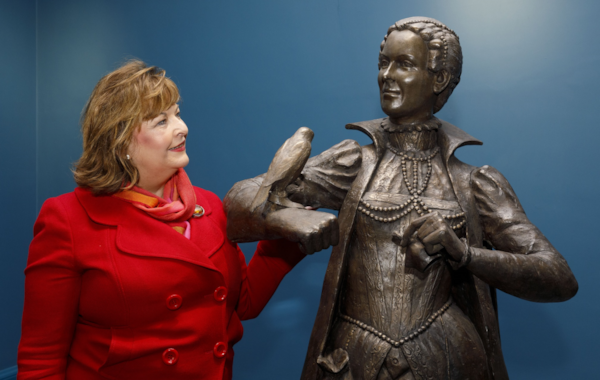 A well-loved statue of Mary Queen of Scots that stood in a Linlithgow garden has been moved to its new home at the new Linlithgow Museum, opening on 19 April 2019.

A well-loved statue of Mary Queen of Scots that stood in a Linlithgow garden has been moved to its new home at the new Linlithgow Museum, opening on 19 April 2019.

The move follows the relocation of Annet House Museum to a new, fully accessible space in West Lothian Council’s Linlithgow Partnership Centre, close to Linlithgow Palace (where Mary Queen of Scots was born), St Michael’s Church and the Burgh Halls.

The museum takes the form of three large galleries, exploring the history of Linlithgow, trades within the town and ‘Life by the Loch’. Old Annet House favourites, such as the Newlands plough and the statue of Mary Queen of Scots, will be on display, as well as many objects that have never been exhibited before. New interactive features are also available, including listening posts with clips from the museum’s recent oral history project. Entry is free but donations are very welcome.

Community participation is at the heart of the volunteer-led museum and it includes a bespoke community space for school sessions, reminiscence sessions, film shows, talks and more. There are community displays too and the first of these, co-curated with pupils from Bridgend Primary School, shows what life was like for the children’s grandparents. Pupils from St Joseph’s and Low Port Primary Schools have created an animation of the history of Linlithgow that will be on display as well.

William Morrison, Chair of the Linlithgow Heritage Trust, said: “The aim is for the town to view the museum as their museum. We want it to be not only an exciting visitor attraction but for it to become part of the community, so that local people enjoy the galleries, participate in the events and take part in running the museum.

“We are very grateful for the funding that has made the move possible. We would especially like to thank the National Lottery Heritage Fund, LEADER, West Lothian Council and other funders for their support.”

The National Lottery Heritage Fund funded the new museum with a grant of £240,000.

Opening times: Monday, Wednesday-Saturday 10am – 4pm; Sunday 1pm – 4pm. The new museum will be closed to the public on a Tuesday although will be available to groups by prior arrangement.

For many more travel ideas, including how you can organise a stay in a castle, lighthouse breaks, and history days out around Scotland, download Celebrate Scotland.