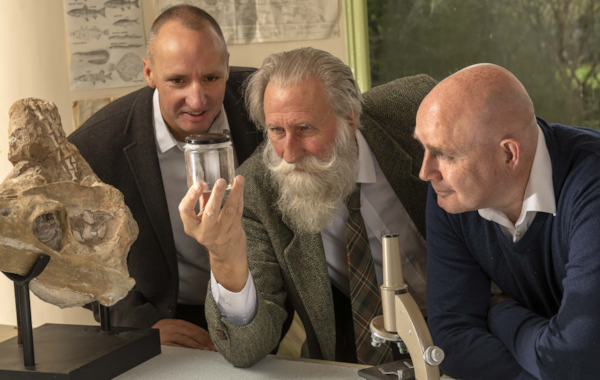 VisitScotland has today welcomed a DNA investigation into the watery inhabitants of Loch Ness as researchers revealed their findings.

VisitScotland has today welcomed a DNA investigation into the watery inhabitants of Loch Ness as researchers revealed their findings.

Professor Neil Gemmell of the University of Otago in Dunedin, New Zealand, who led a global group of scientists, unveiled results of the study at the Loch Ness Centre and Exhibition, Drumnadrochit.

Loch Ness and the ‘Nessie’ phenomenon is worth millions to the Scottish economy. Hundreds of thousands of visitors travel to the loch and Drumnadrochit every year to catch a glimpse of the mythical monster. At over 22 miles long, Loch Ness encompasses a large variety of experiences to tempt visitors, including boat trips, visitor attractions, local artisan food & drink producers and a range of accommodation.

This is not the first investigation into the depths of Loch Ness. In 2016 a 30-foot long Loch Ness Monster model was found on the loch bed during a state-of-the art sonar search by Kongsberg Maritime and supported by The Loch Ness Project and VisitScotland. Thee finding was a prop from the 1970 film, The Private Life of Sherlock Holmes.

QUICK LINK: Top things to do in Loch Ness

Professor Gemmell led the team which includes Adrian Shine from the Loch Ness Project who has conducted previous research on the loch, Professor Eric Verspoor, director of the Rivers and Lochs Institute at Inverness College University of Highlands and Islands (UHI), and molecular ecologist Lucio Marcello from UHI.
250 water samples were taken from the length, breadth and depth of Loch Ness, UK’s biggest loch by volume freshwater. The DNA from those samples was extracted and sequenced, resulting in around 500 million sequences that have now been analysed against existing databases.
The results, which can be read in full here show that the team identified 11 species of fish, 3 species of amphibian, 22 species of birds and 19 mammals, most of which are species known to be resident in or around Loch Ness.
Adrian Shine, Leader of the Loch Ness Project, said: 'Prof. Gemmell’s environmental DNA survey of Loch Ness has furnished us, at a stroke, with species lists, to compare with those we have compiled over the last forty years with net and microscope. This powerful yet elegant technique has also brought a new maturity to the popular debate about what much larger creatures might sometimes be seen here.'

But what of the Loch Ness monster. Do any of the DNA findings offer a clue? The report says: 'Environmental eDNA metabarcoding approaches are powerful but limited by the genome regions they target. We know we have not identified every species present in Loch Ness, but we doubt we have missed any major groups of living things. That we identified all known fish species from Loch Ness in our eDNA data provides some reassurance our approach was sound.

'That said, any survey must accept that it may not find all species present because sampling effort is inadequate, the species is migratory (e.g. sturgeon), small, at low abundance in the system, sheds cells at low rates, or is missed by the metabarcoding.

'Loch Ness is vast and given that eDNA signals in water dissipate quickly, lasting days to weeks at most, there remains the possibility that there is something present that we did not detect because we sampled in the wrong places at the wrong time, or our metabarcoding method could not detect “Nessie” because the sequence could not be matched with anything in the sequence databases.

'Our investigation, like every investigation before it, has no definitive proof of the monster. Proving something does not exist is pretty much impossible. We do however have a further theory to test, that of the giant eel, and it may be worth exploring this in more detail.'