Robert the Bruce's connections with Dumfries Discover connections between Scottish king Robert the Bruce and the town of Dumfries in the Dumfries & Galloway region of Scotland.

Dumfries and Galloway was integral to Robert the Bruce's struggle to gain the Scottish throne. Scots and English armies criss-crossed the area throughout the years of resistance to the imperialist ambitions of Edward I of England and his son Edward II. Nithsdale and Annandale and, to some extent, Esksdale, offered natural routes into the heart of Scotland.

Robert the Bruce and Dumfries

Dumfries was a key town and sheriffdom in Scotland which controlled the main western route into Scotland from the south. After Wallace's defeat at the battle of Falkirk in 1298, Edward I instructed Robert Clifford to hold Dumfries with a force of 76 men made up of twelve men-at-arms, 24 foot, 26 crossbowmen and 14 civilians.

Provisions, to last from October until June, comprised 120 quarters of wheat, ten tuns of wine, 20 quarters of beans and pease, 100 quarters of oats for the horses, 50 oxen carcasses, 10,000 herrings and 500 dried fish. Expenses ran to ten marks a week and the bishop of Carlisle loaned three crossbows.

King Edward was at Dumfries on 30 October 1300, when he granted the Scots a truce until the end of May the following year. Towards the end of 1314 the town was also the venue for peace talks between the two sides which collapsed before Christmas.

The castle was a principle fortress in the south west and King Edward's justiciars were meeting there on the morning of 10 February 1306, when Robert Bruce and John Comyn met in the Church of the Greyfriars and Comyn was subsequently killed. After a sword fight in the town between the supporters of both parties, Bruce's band, no doubt aided by townsfolk who were fully behind what he had done, rode the two miles or so to the castle which quickly surrendered when Bruce threatened to burn it down.

The castle was soon recaptured and remained in the hands of the English until  February, 1313, when it was surrendered to King Robert by his old enemy Dungal Macdouall. 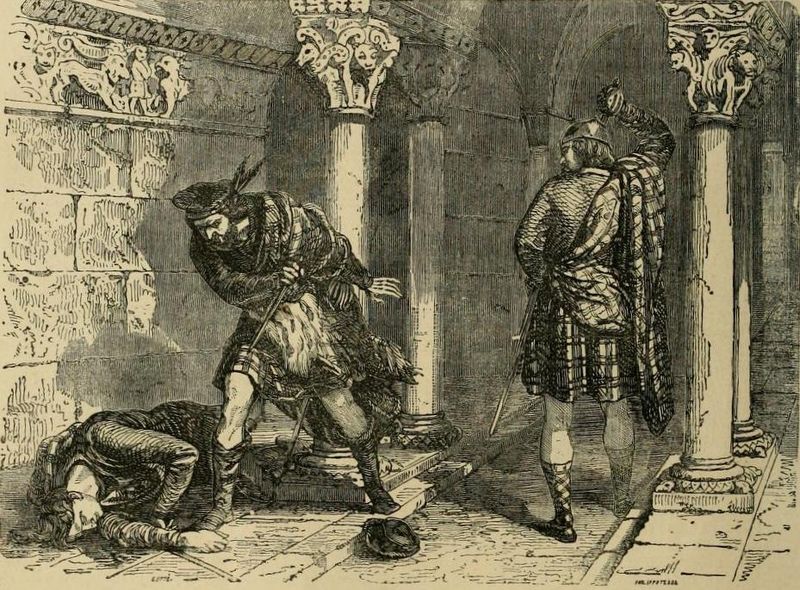 Dumfries was also the scene of the execution of Bruce's brother in law and friend, the Yorkshire knight Sir Christopher Seton. Seton was captured at Doon Castle and brought to the town where he was condemned for his part in the killing of the Comyn. He had killed Comyn's uncle, defending Bruce. Seton, with two of his brothers, was drawn, hung and quartered on the small execution hill just outside the town.

The Grey Friars Kirk of the time has long since disappeared. Its site is bounded by Friars Vennel, Castle Street and Buccleuch Street. The grounds stretched down to the banks of the River Nith. A plaque on a shop wall on Castle Street is all there is to signify the location of the Comyn murder, such a crucial event in the history of Scotland. In 1902 local archaeologists dug up the site and found what they took to be the foundation stone of the high altar. Several skeletons, their heads against the stone and buried in an east-west direction, were uncovered and judged to have been senior clerics at the church. Two other skeletons buried nearby were thought to have been the bodies of the two Comyns.

Dumfries Castle stood in what is Castledykes park. Sadly only the mound remains. The site where Seton was killed is now consecrated ground in the shape of St Mary's church. Seton's widow, Christian, King Robert's sister, had a chapel built on the site and the king set in place an annual payment of £5 for its upkeep.

Plaque image and text courtesy of the Robert the Bruce Commemoration Trust. The plaque was erected by the local council around sixty years ago.

To find out more about the Trust, visit its website.