The Mary Queen of Scots Way is a 107-mile (172km) long distance route across Scotland, from Arrochar in Argyll & Bute to St Andrews in Fife.

This long-distance trail runs from coast to coast and links together different places associated with the life of Mary Queen of Scots.

The Way links with the Cowal Way, the West Highland Way, the Rob Roy Way and the Fife Coastal Path and goes through a variety of scenery, starting from a rugged sea loch, crossing Loch Lomond and traversing its National Park to the hills of central Scotland, ending on a sandy beach on the Fife coast.

It passes mountains, lochs and waterfalls; castles, hill forts and aqueducts; and is broken into manageable sections which end at welcoming villages and small towns with friendly pubs and B&Bs. Compared with other Scottish Long Distance Paths, the Mary Queen of Scots Way is harder than the Fife Coast Path, similar in difficulty to the Rob Roy Way and West Highland Way, and easier than the Southern Upland Way.

The walk and accompanying guidebook is written as a series of ten self-contained stages, each of about 10 miles, except stage 1 which is really just a half stage at 5 miles.  These provide days of reasonable length for day walkers, given the need to travel at the start and end of each day.

The Mary Queen of Scots Way begins at the head of Loch Long and goes into Arrochar village, joining the Cowal Way, past Ben Vorlich and on to Inverglas.

Head along the West Highland Way through ancient woodlands, on to Gleann Gaoithe and ending this section at Loch Dhu. Travelling past two aqueducts past Duchray Bridge and Duchray Castle, past Lochan Spling and Kirkton through to Aberfoyle.

Out of the town to Craig of Monievreckie and views towards Inchmahome Island, where Mary Queen of Scots stayed, through forest and moorland to Loch Venachar and on through the woods to Callendar.

Leave Callander for Drumdhu Wood and through to Keltie Water, Brokentree Wood, past Old Kilmadock Cemetery on to Doune Castle, before reaching Dunblane.

This section continues along Baxter's Loan over Allan Water, around Cocksburn reservoir to Balquharn and entering Tillicoultry.

Leave the town by Devon Way past the Dollar Burn, along to Castle Campbell and via Cadgers Way into Glendevon.

Continue to Borland Glen, over Coul Burn into Corb Glen through forest with views to Loch Leven, then on to Glenfarg.

Continue up to Arngask Farm to Yellow Hill and then down to Bannarty, on to the ruins of Ballo Castle and down towards Falkland and its splendid palace, a favourite of the Stewart monarchs.

Leave on the road to Newton of Falkland through woodland to Kingskettle, the Shoreland, Balmacolm and finishing at Ceres.

Continue through woodland and farm tracks to Kinnimonth Hill and on to Drumcarrow Craig, with its splendid views. After a glimpse of the North Sea carry on through Denhead, around Craigtoun Country Park and through to your destination at St Andrews.

n.b. The Mary Queen of Scots way is an invention of author Paul Prescott and has no official waymarkings or signs. 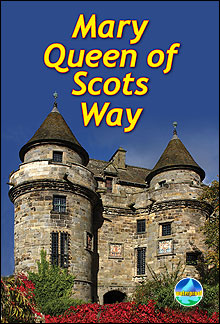 This guidebook contains everything a walker needs to plan and enjoy their holiday: