Against a background of the gradual erosion of Scotland’s ecclesiastical heritage, the Scottish Redundant Churches Trust strives to strike a balance between the conservation and reuse of historic churches. By Victoria Collison-Owen

Against a background of the gradual erosion of Scotland’s ecclesiastical heritage, the Scottish Redundant Churches Trust strives to strike a balance between the conservation and reuse of historic churches. By Victoria Collison-Owen.

The nature, character and extent of Scotland’s ecclesiastical heritage is the product of its own particular political and religious history, notably: its Reformation in the 16th century; its turbulent 17th century; the splintering of its Presbyterian denominations in the 18th and 19th centuries; and their partial reunion in the 20th century. The survival and revival of the Catholic and Episcopalian Churches, and the arrival of other denominations and non-Christian faiths from other countries and cultures, have added to the richness, diversity and complexity of Scotland’s ecclesiastical heritage.

(Historic Environment Advisory Council for Scotland (HEACS), report with recommendations on the long-term conservation of the ecclesiastical heritage in a time of demographic change, September 2009)

Scotland’s story, and that of its people, is inextricably bound up with the nation’s religious history. Our rich ecclesiastical heritage, found in every community the length and breadth of the country, is fundamental to understanding our culture and identity.

Growing secularisation, combined with demographic change, has compounded the legacy of ‘over-churching’ and created a major challenge for those managing Scotland’s heritage. It is particularly challenging for the Church of Scotland, owners of the greatest number of ecclesiastical buildings, which, the HEACS report noted, ‘has responsibility for the most substantial built heritage estate, or portfolio of built heritage assets, in Scotland – more extensive in number than those cared for by Historic Scotland and the National Trust for Scotland combined, and more widely distributed.’

With too many churches, redundancy and loss is inevitable. This is by no means a new phenomenon as the Victoria & Albert Museum’s 1977 exhibition Change and Decay – a future for our churches observed: ‘in Scotland, since 1900, more churches have been abandoned, closed or demolished than are now in use.’

Concern for the gradual erosion of Scotland’s ecclesiastical heritage grew during the 1980s. The rising number of closures of important historic churches caused particular unease, with some being considered too significant for conversion.  A conference held in 1994 identified the lack of a national organisation dedicated to the care of redundant places of worship and, in 1996, the Scottish Redundant Churches Trust (SRCT) was established by a group of individuals to fulfil that need.

Led initially by a Chairman and three Trustees, the Trust’s main objectives were: ‘To preserve for the benefit of the local community and of the nation at large, redundant churches situated in Scotland… of historic architectural or aesthetic interest, to promote and further the study of the same, and to make information obtained thereby available to the general public.’

The Trust’s initial approach was curatorial – acquiring the most significant examples of redundant places of worship to be conserved intact as museum pieces and saved for the nation.

Following the principle of ‘conserve as found’, the SRCT undertook its first rescue projects at St Peter’s Kirk in Orkney and the East Church in Cromarty. Both churches were acquired in 1998 from the Church of Scotland for a token £1.

The initial testing-ground was St Peter’s, Sandwick, in 2002-3: a £250,000 project which saw the A-listed derelict kirk painstakingly repaired and conserved. The church was remarkably unaltered since its construction in 1836, and the decision was taken not to impose change through the introduction of electric light, running water or heating.

In the repair of the building emphasis was placed on traditional skills and materials and the success of this was acknowledged by Orkney Islands Council who described the project as ‘an exemplar of conservation work in Orkney [that] has stimulated interest in a wide variety of traditional building skills and in historic buildings generally.’ 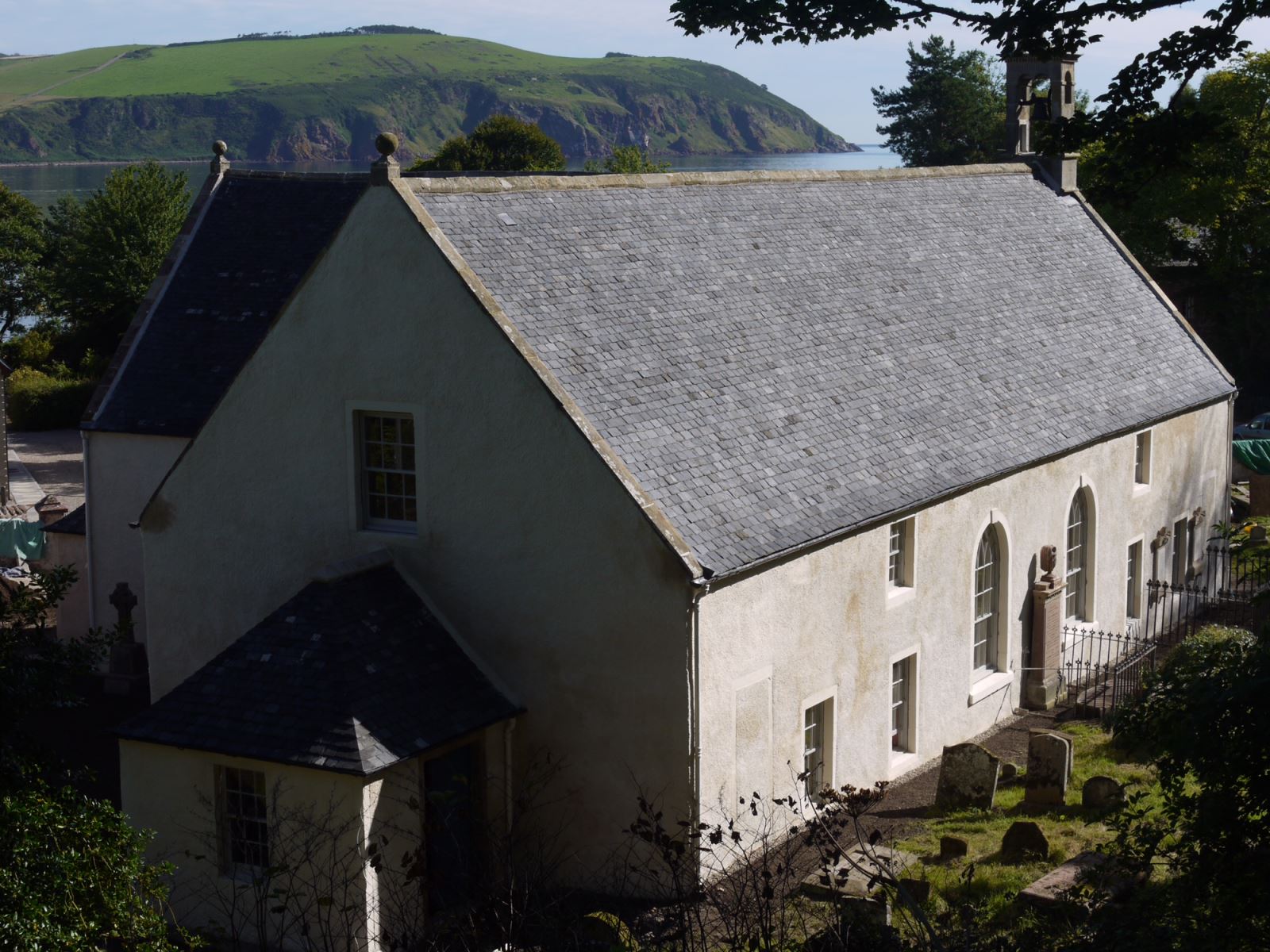 Following the conservation of St Peter’s, and with awards from Europa Nostra, the RIBA and Civic Trust, the Trust focused on the East Church, Cromarty’s historic former parish church, and a place of worship for over 700 years.

This proved to be a hugely complex project, taking five years to raise the £1.2 million funding required, and requiring a raft of specialist reports and a comprehensive conservation plan.

Knowledge of the East Church was central to the project, both in developing an understanding of the historic fabric, and in researching and documenting the building’s cultural significance. Since medieval times the building had charted the fortunes of the community and its townsfolk and, in its fabric, expressed periods of prosperity, change, and hardship.

Dating principally from the 18thcentury, the church is notable for its fine interior with box pews, hatchments, and elegant Georgian ‘laird’s loft’. It also has close associations with the writer and stonemason, Hugh Miller, one of the leaders of the movement that created the Free Church in 1843.

Developing a sense of ownership of the building amongst local people helped the church to be seen as part of the town’s heritage, fostering pride and interest. Today, the East Church is cared for by a committed group of local volunteers who open the church daily throughout the year.

Uses for the East Church, like those of St Peter’s, are low-key, with the primary objective being to provide free access to local people and visitors. Interpretation allows over 20,000 visitors every year to learn about the East Church and the lives of the townsfolk who worshipped there through the centuries. An integrated approach connects the story of the church with that of Cromarty as a whole, encouraging visitors to explore the town further.

Occasional services are held, together with weddings and funerals, but the church also hosts exhibitions, festivals, concerts and performances, and figures large in community life.

Changes to the funding landscape

For over twenty years the Trust has successfully developed skills as curators and conservators of a portfolio of seven nationally important churches. In recent years, however, changes in the funding landscape have created the need for new approaches that strike a balance between strict preservation and sensitive reuse.

The Trust’s current project at St Margaret’s Braemar marks a significant shift for the organisation. This will see the conservation and regeneration of Sir J Ninian Comper’s 1899 masterpiece as a performance and heritage interpretation space, supporting the vital visitor economy of the Cairngorms National Park.

Importantly, it provides a lifeline for a nationally important church that has been on the Buildings at Risk Register for 15 years. The ambitious £2.4million project will extend the church to create level access and accommodate essential facilities, completing the cruciform design planned by Comper but never executed. 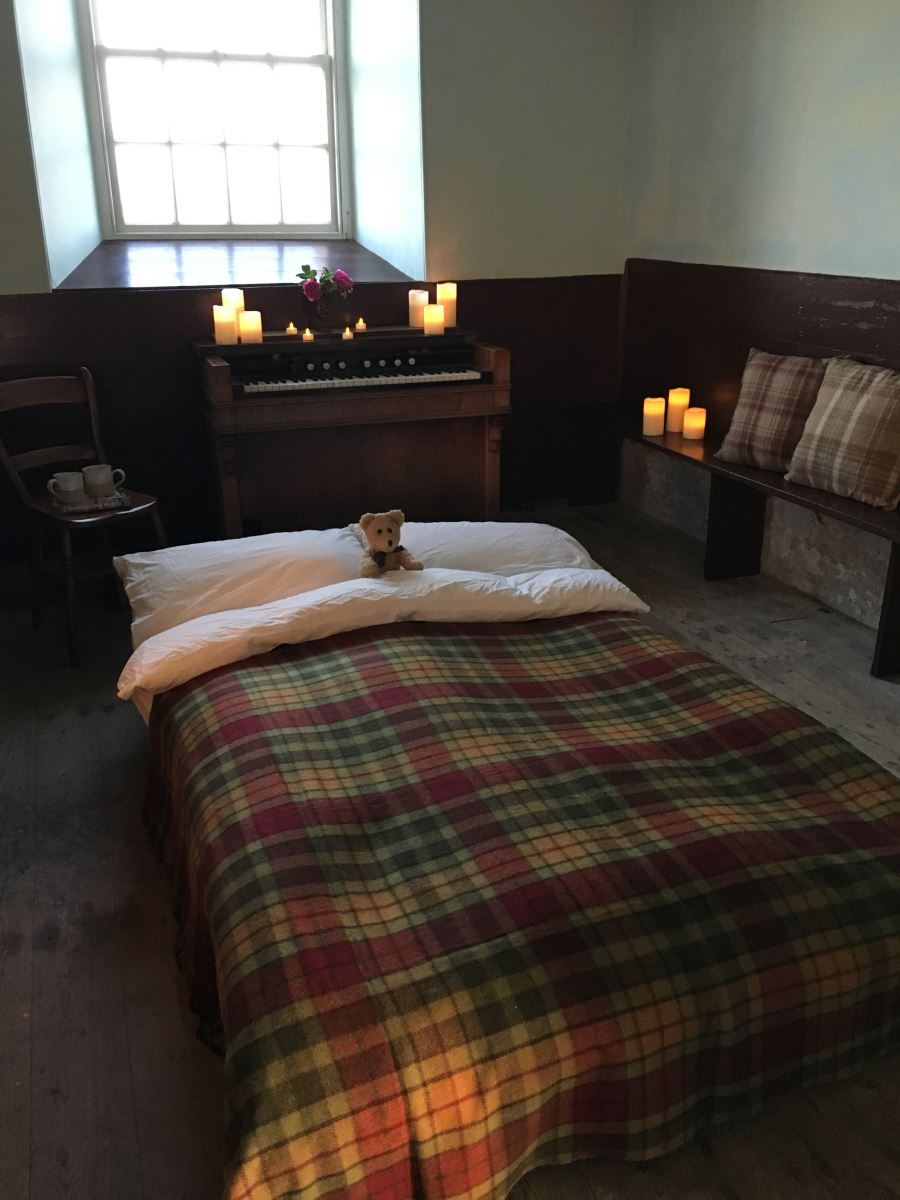 Innovation on a more modest scale has seen the introduction of Champing (church camping) at St Peter’s Kirk, the first church in Scotland to offer this. Piloted in the summer of 2017 in partnership with the Churches Conservation Trust, Champing offers visitors the opportunity to book exclusive overnight stays in the historic kirk.

With a paid caretaker and breakfasts provided by a local business, the initiative looks to give back economically to the community as well as providing visitors with a unique way of experiencing the church.

The Trust recognises that managing its churches in an imaginative and creative way not only increases their sustainability, but opens them up to new and younger audiences and ensures they remain relevant and valued.

In the two decades since the Trust was founded the ecclesiastical heritage landscape has changed immeasurably. New and different challenges exist alongside the original need to preserve Scotland’s best religious buildings where they are threatened by closure. Meeting these challenges requires the organisation to continue to adapt, grow and work in partnership with others in the historic environment sector and beyond.

Haynes, N. Research Report on the Extent of the Ecclesiastical Heritage in Scotland, 2008.

The Scottish Redundant Churches Trust (SRCT) is an independent charitable organisation (SC024407) that safeguards Scotland’s ecclesiastical built heritage and promotes its understanding and enjoyment. We save historic churches at risk and work with communities to secure the future of their churches through expert conservation and creative regeneration.

Established in 1996 to take outstanding examples of redundant places of worship of all denominations and faiths into care, we own seven historic churches, all of national importance.

The churches that we acquire are selected on the basis of their outstanding architectural and/or historic merit, and as being worthy of preservation for current and future generations. Churches coming into our care are generally in poor condition and this may have been a contributing factor to their redundancy. The dual threat posed by poor condition and disuse puts these churches at risk, so our priority is to address both repair and reuse. Ensuring that our churches are open to visitors and used by local communities goes hand-in-hand with fixing the roof.

Churches in our care remain as places of worship: conserving their cultural significance and sustaining their original purpose with occasional services, weddings and funerals. However, worship becomes only one part of a wider use-mix which is developed for each building to create opportunities and attract new audiences.  New life and purpose is brought through introducing secular uses and activities, and our stewardship ensures that a balance between conservation and reuse is achieved.

We work in partnership with communities where we have churches in care, enabling local people to play an active role in caring for an historic building and creating an asset for their community.