A history of Scotland's rock lighthouses 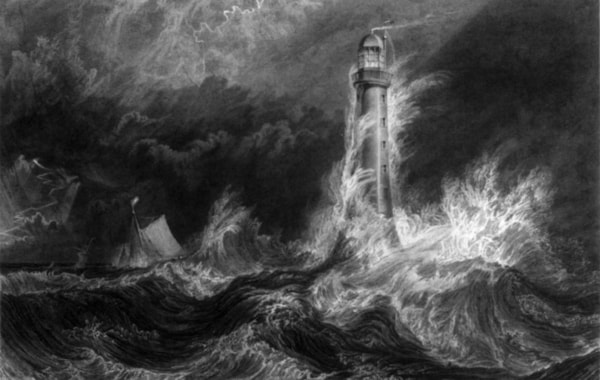 Bell Rock Lighthouse during a storm

Rock lighthouses stand on exposed, storm-battered and often partially submerged reefs or small islands in seemingly impossible conditions for the erection of any structure. Keepers’ families therefore had to live ashore and not at the light itself.  The construction of these lighthouses inevitably involved stories of steely determination, engineering brilliance and the almost superhuman endurance and skill of the workmen in the face of the unimaginable power of the sea.

Prior to the mid-18th century most of Scotland's 6,000 miles of coastline was dark.  Its foreign trade was negligible and therefore the need for lighthouses was of no great concern. Its first beacon – a crude, coal-burning grate on the Isle of May – was lit in 1636 and a handful of shore stations followed.  By 1760 there were still only six, but increasing foreign trade later in the century led to demands for safer navigation around Scottish coasts by night.

Lights on coastal sites were easier to construct, but it was the unlit, half-submerged rocks and jagged reefs some distance from a safe haven that caused the greatest loss of life and shipping, attracting greater clamour for a lighthouse from ship owners.  The Commissioners of Northern Lighthouses (often referred to as the Northern Lighthouse Board), were inaugurated in 1786, and subsequently became responsible for the daunting task of lighting the darkness around Scotland's coast.

Early in the 19th century their first major challenge was the infamous Bell (or Inchcape) Rock, 12 miles from Arbroath and completely covered by every high tide.  It took four years of stubborn perseverance by Robert Stevenson before the first light was seen on 1 February 1811. It's now the oldest functioning rock lighthouse in the world. No major structural repair or modification has been needed, and it has withstood over two centuries of storm and tempest.

It was also the first time that the name Stevenson became synonymous with lighthouse construction.  As it transpired, the first lighthouse Robert Stevenson designed and built was also his greatest achievement.

After Bell Rock came another 17 major lights but none surpassed it in beauty of design or difficulty of construction.  He was the first in a dynasty of Scottish engineers that would subsequently go on to build 87 major lights around Scotland and the Isle of Man.  After Robert came Alan, David, Thomas, David A. and finally Charles; their achievements singly or jointly covered the years 1811–1937.

To go into any great detail about each of them or every notable light they built would occupy a book – which has already been done.  But in this brief overview of Scottish rock lights I must mention the magnificent Skerryvore, rising from a reef 11 miles from Tiree's windy shore.  This was the third light built by Alan Stevenson and undoubtedly the pinnacle of his career.

Between 1838–44 he constructed a light so graceful and elegant in appearance that it was described by Robert Louis Stevenson (Alan was his uncle) as ‘the noblest of all extant deep sea lights’. Some regard it as the most beautiful lighthouse in the world.

Skerryvore's nearest neighbour, 14 miles south-west from Iona, is another pillar rock light that bears a striking resemblance to it. Heartach was the product of David and Thomas Stevenson's toil from 1867–72 on a lonely whaleback rock.  Its construction was dogged by instances of seismic fury from the sea, particularly in 1869 when an Atlantic storm removed 14 blocks of granite, each weighing two tons, set in cement and held with metal bolts – 35 feet above high water

Eleven of these blocks were never seen again. It was also one of the most difficult lights for the NLB to change keepers at and therefore an early candidate for automation.

For some more spectacular examples of what havoc a storm can wreak, look at Muckle Flugga lighthouse, the most northerly in Britain. It sits on the summit of a sheer knife edge of rocks closer to the Arctic Circle and Oslo than to London.  David and Thomas Stevenson had the seemingly impossible task to try and mark this final outpost of Britain, which took them from 1854–58.

One of the first keepers reported that a storm which broke against the base of the rock had climbed the west face, knocking down a wall and carrying debris and fish into the flooded courtyard 200 feet above sea level!

The history of Scottish rock lights is full of similar instances of the battle between Man and the elements and the tenacity of their engineers.  The Stevensons were indeed a remarkable family and their achievements from a century or more ago still stand and still function – albeit automatically.  R.L.S. – a Stevenson who didn't follow the family tradition, paid tribute to them in a way that brought him his own recognition:

There is scarce a deep sea light from the Isle of Man to North Berwick,
but one of my blood designed it.
The Bell Rock stands monument for my grandfather;
the Skerry Vhor for my uncle Alan;
and when the lights come out along the shores of Scotland,
I am proud to think that they burn more brightly for the genius of my father.
Robert Louis Stevenson

Christopher Nicholson is the author of Rock Lighthouses of Britain.

Image: Illus. in: Robert Stevenson, An Account of the Bell Rock Lighthouse, 1824