An introduction to... Clan Donnachaidh The Chief and clan members at the Edinburgh Military Tattoo

Clan Donnachaidh is the only Scottish clan that still uses its Gaelic name. Its principal surnames are Robertson, Duncan and Reid, found in large numbers in the clan heartland in Perthshire and the neighbouring counties.

Alexander Gilbert Haldane Robertson of Struan is the 23rd Chief. Having succeeded his father in 1983, he celebrated 35 years as Chief in 2018. He and his family are members of, and actively support, the clan society. The Society’s AGM and associated social activities in clan country each year provide a regular opportunity for clansfolk to meet with him and his family.

'The Robertsons of Struan are unquestionably the oldest family in Scotland, being the sole remaining branch of that Royal House of Atholl which occupied the throne of Scotland during the 11th and 12th centuries,' wrote William Skene, the Historiographer Royal. They descend in the male line from the Celtic earls of Atholl and from the Kindred of St Columba.

The first chief was Donnachadh Reamhar, which translates to Stout Duncan. Hence his clan was called the Clan Donnachaidh, the children of Duncan. He was said to be a close adherent of King Robert Bruce and he called his son and heir Robert after the great king. Clan Donnachaidh is traditionally listed among the clans present at the Battle of Bannockburn. 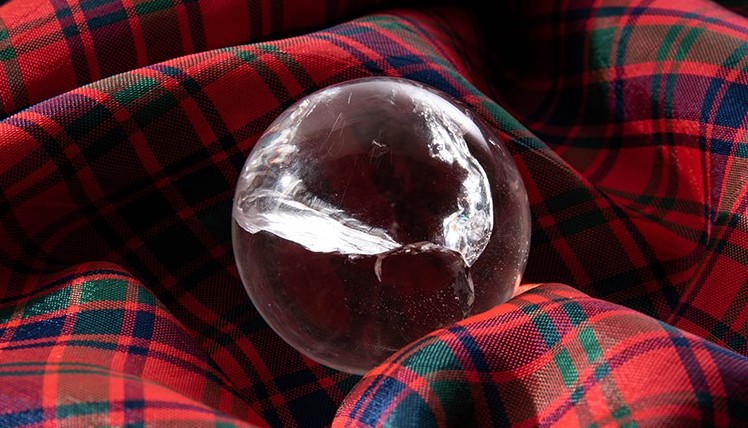 The Clach na Brataich – the Stone of the Standard – the charm stone of the clan, unearthed by Stout Duncan in 1338 just before a battle. Now in the clan museum at Bruar

The 4th chief, another Robert, captured the assassins of King James I. For this he was awarded a royal charter for his lands granted in 1451, a thousand square miles of beautiful Highland country that included Lochs Tay and Tummel, the Fairy Mountain Schiehallion, and stretched as far as the gates of Perth. His successor was named in his charter 'Alexander, Robert-son' and from then the chiefs and their descendants used the name Robertson.

The later earls of Atholl were kinsmen of the Stewart kings and they nibbled away at the clan's domain. The most successful was uncle and guardian of Alexander's grandson, William. In the turmoil following the Battle of Flodden, he succeeded in snatching the best part of the clan's territory in 1515 and, the following year when William obtained his majority and objected, the earl chopped off his head.

In spite of this, great numbers of Robertsons remained on these lands and they tended to follow their chief rather than the earl. It was fortunate that the interests of the earls of Atholl and the clan chiefs usually coincided in later centuries. With the incoming Stewart lairds they fought together as Athollmen in defence of their country.

The historian Robert Scott Fittis wrote ‘The Robertsons of Athole were long esteemed the best swordsmen in Scotland, and their prowess, under the royal banner, mainly contributed to the brilliant triumphs of Montrose.’

The clan fought in all three Jacobite Risings. In 1689, Alexander, the Poet Chief, was the first to raise his sword for King James. In the ’15, the Earl of Mar said that Struan's brigade was the strongest in his army and, aged 75, Alexander brought his clan south to fight at Prestonpans. At Culloden, as part of the Atholl Brigade, they suffered terrible casualties and the clan lands were forfeited. 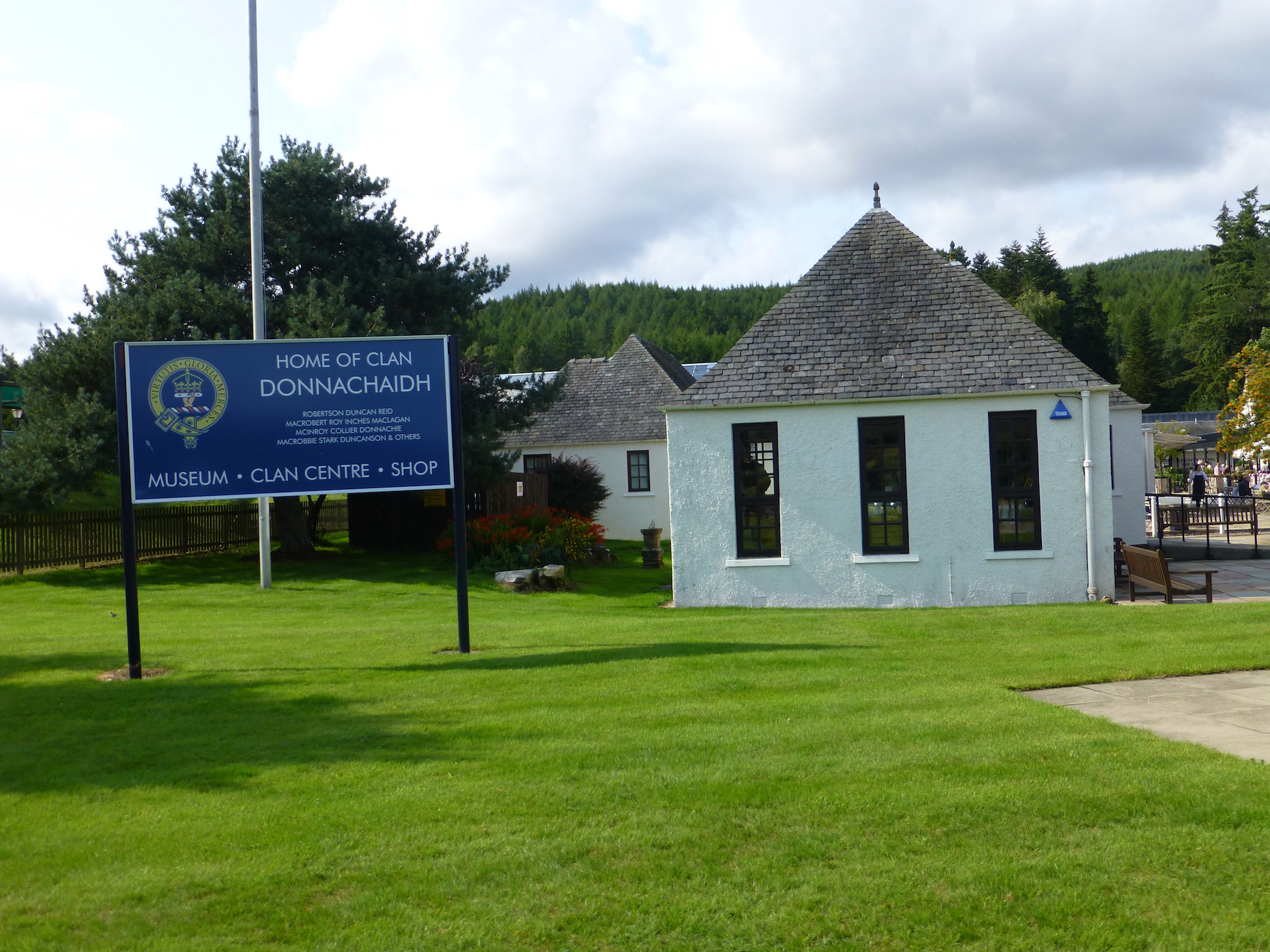 The Clan Society was first formed in Edinburgh in 1823 and refounded in 1893. Activity between the two world wars was largely confined to annual dinners but there was a revival in 1948. By the 1960s, the Society had settled its headquarters in the old clan lands at Bruar where it built a museum to preserve the heritage of the clan.

Every year clansfolk from all over the world gather for the Society's AGM in Pitlochry, for receptions hosted by the Chief, for tours and celebratory dinners. The Clan Donnachaidh Annual has been mailed to members since 1951. 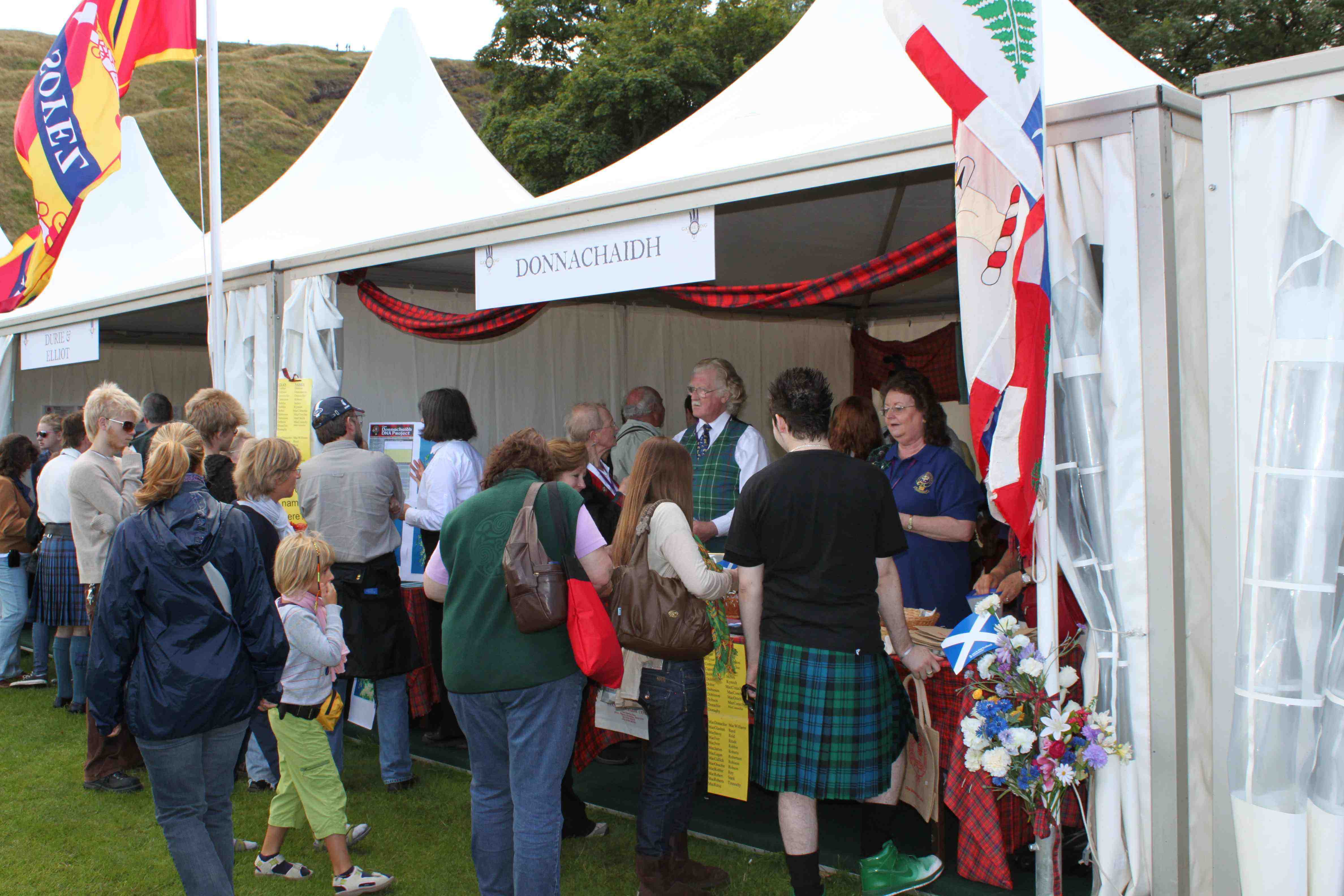 The Clan Donnachaidh tent at the Homecoming Gathering in Edinburgh 2009

The Society has 26 branches across the world, each of which has social activities to which new members or those interested are welcome. The Society website has the contact details of the branch leaders. Alternatively just turn up at a Highland Games, find the clan tent and connect with the international family that is the Clan Donnachaidh.

In 2017 a trust was formed to buy and maintain the beautiful little church at Struan (below) where clansfolk had worshipped, been baptised, married and been laid to rest for 1,000 years. 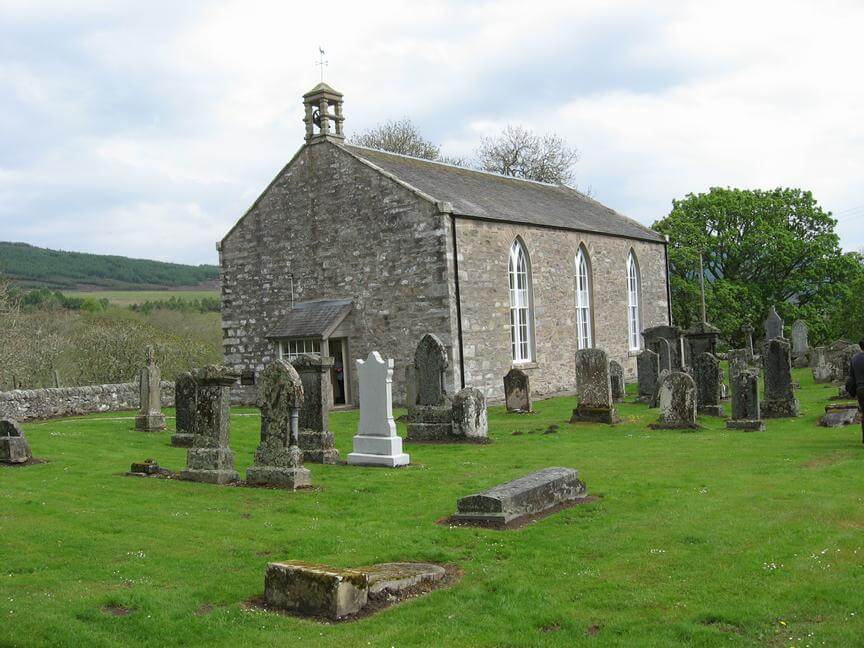 The Society recently initiated a Youth Award, granted to a young person who is recognised as having shown unusual courage and determination over the past year in facing up to and overcoming personal adversity, difficulty or hardship.

The DNA project was set up in 2002. It now has nearly 1,900 members representing the main surnames Robertson, Reid and Duncan and some of the other surnames.

Testing has revealed a large number of different origins for all the main surnames but also locations in Scotland associated with certain family groupings, thus providing ancestral links for clanspeople whose ancestors moved away. For further information see here.

The best way to find out more about the clan is to go to our website. As well as stories about the clan, its history, tartans and activities, you will find contact information for the Society and branches.