Dr Phil Back reviews a new book on housing in 20th-century Glasgow. 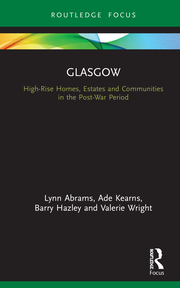 This is the ninth volume in the publishers’ Built Environment City Studies series, each of which centres on a specific city and explores urban development or renewal. Glasgow is the subject of this study, with the focus on the city’s high-rise approach to resolving its intense housing problems in the post-war 20th century.

The book draws heavily on the earlier work of Pearl Jephcott, who carried out an influential study into the experiences of high-rise residents in the late 1960s and published her findings in 1971. The authors develop this analysis substantially, using qualitative data Jephcott collected but did not report, and augmenting it with more recent archival material as well as 23 interviews with (mostly former) residents of the flats. The result is a more fully fleshed-out and nuanced understanding of what life in high-rise blocks was like, both at the outset and later, presented in chapters that explore, in turn, the interior of the flats, their external surroundings, and the communities they created. Some of the material has been previously published, viewed through different lenses. It is nevertheless useful to have it consolidated, and reworked, into this format.

The high-rise blocks developed by the city from the 1950s onwards were one of several strategies to rehouse people living in substandard accommodation. Glasgow embraced this approach enthusiastically. There is some confusion in the text about how many tower blocks were built (on p. 1 we are told there were more than 200 by 1975; on p. 12 the number rises to 321 by the same date. The figure of 163 quoted for 1969 on p. 8 only adds to the muddle.) But whatever the number, it was a large one.

An interesting introduction sets the scene for this transformation, which not only rehoused much of the population but also dramatically shifted the balance of tenure away from private rentals and into council tenancies. For a time at least, it allowed the city to portray itself as modern and futuristic. The residents’ own stories suggest a similarly positive response to their new surroundings, which offered greater privacy and facilities that they had previously lacked, including central heating, hot water and plumbed-in baths and WCs.

The onset of problems

However, problems became more apparent over time: damp was widespread, the utility bills were high, the designers had not adequately considered the needs of homemakers or children, amenity provision was limited and often inconvenient, and initial noise and nuisance evolved into anti-social behaviour and crime. This encouraged many residents to move on, but left others to live in fear and isolation, and created the negative reputation that we now associate with the tower blocks.

The authors analyse this change in terms of ‘residualisation’, a shift in the focus of social housing towards providing a safety net for those who had proven more difficult to house, which changed the social composition of high-rise tenancy.

The book does not entirely negate these perceptions, but paints a fuller picture than the received wisdom of poor architectural design and materials, and inadequate local planning. It highlights, for example, failures in council allocations policy and in maintenance, especially of the all-important lifts. Critics have often noted the loss of community implicit in high-rise living, but the authors show that many residents had effective, informal, supportive relationships with their neighbours.

Overall, residents’ perceptions emerge as far more complex than the simplistic narratives usually associated with high-rise, and this rebalancing is helpful. This is also the only academic text known to me that quotes ‘The Jeely Piece Song’, a humorous response to the difficulty of communicating effectively between the flats and the children playing below.

Given the evident challenges that emerged in the towers, though, I would have welcomed some discussion of their governance. It would be worth exploring the roles of on-site caretakers, district housing managers, and perhaps local councillors, as well as the question of whether residents saw themselves as powerless, or tried to organise to protest conditions. The book is thin at 144 pages (though this is in line with the rest of the series), surely allowing space for further exploration.

The book identifies its target audience as academic, and it will be valuable to students and researchers, providing a much-needed alternative insight into what have hitherto been easy assumptions about the experiences of high-rise residents. But it will be informative to others interested in the development of Glasgow specifically, and public-sector housing more generally. Availability as an ebook brings the price within relatively easy reach.

Dr Phil Back is a landscape historian with a particular interest in the towns, cities and countryside of 20th-century Scotland.