History Scotland talks to Ross Calderwood, a maker of hand-crafted Scottish smallpipes and Highland bagpipes, about the craft of pipe making.

Ross Calderwood of Lochalsh Pipes, based in Kyle of Lochalsh in the Scottish Highlands, has been playing the Highland bagpipes since the age of eight. Ross’s smallpipes, border pipes and reelpipe designs are based on the large archive of historical bagpipes that are kept in the various museums in Scotland and England, including Inverness and Northumberland.

Ross’s interest in the pipes came about, not as the result of a family tradition, but through a growth of interest in piping around Glasgow and the Central Belt. He told us: ‘With a decline in the traditional industries in this area came a dying out of piping education. The places where piping would have been taught such as work bands, the Boys Brigade, and so on, just weren’t there anymore.  And so central government stepped in and provided schools and tuition delivered at local government level.’ 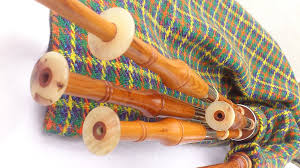 Ross has a passion for traditional pipes, such as the Lowland Pipes and Small Pipes, and creates bespoke pipes from local wood such as yew, holly and ash, in what he describes as ‘a type of re-enactment’. His designs are based on those found in museums across Scotland, including Inverness Museum (which has a collection of historic bagpipes) the College of Piping in Glasgow and the Morpeth Bagpipe Museum.

‘Although I had been playing the bagpipes since the age of eight, I didn’t actually begin to make bagpipes until I was in my Thirties,’ says Ross. ‘This was at a time I was working at Sellafield and I shared digs with a man who wanted to learn to play the pipes. At the same time, I was teaching my children how to play the penny whistle and it just grew from there.’

So what’s the secret to creating a great set of pipes? ‘It’s all in the drilling of the holes,’ says Ross. ‘The holes for the pipes are quite long – around 340mm in a 5mm hole.  And of course it’s all about having the right equipment.

As well as using specialist equipment, the choice of wood is key. Ross’s materials are mainly indigenous hardwoods, such as holly, laburnum, fruitwoods and yew. These timbers would have been traditionally used to make bagpipes in the Highlands providing first class tonal qualities as well as being of outstanding beauty. All the pipes are finished using natural materials such as tagua nut (vegetable ivory), Buffalo horn, rams horn, light coloured woods such as sycamore and holly.

This local material selection is where Ross differs from larger scale pipe makers, as he explains: ‘Many of the large-scale manufacturers use materials such as African Blackwood, which is imported, whereas I use the type of wood which would have been used on historic bagpipes. For example, National Museum of Scotland has a set of smallpipes from the 1750s which is crafted from laburnum.

‘It’s surprising, though, how far the wood used to make these instruments travelled in centuries gone by,’ says Ross. ‘Yes, bagpipes were often made from the wood that could be found in the local area, but there are also many cases where marine ivory or exotic and tropical woods were used, items that could only have been found in South America and the Caribbean – and this was early in the history of Empire, in the 1690s.’

‘The pipes I make are not museum pieces,’ says Ross. ‘Every one is tested throughout its creation and I’ll spend a lot of time playing each set of pipes, particularly towards the end, and for two weeks afterwards, to be satisfied with the sound.’

And what’s been his most unusual commission to date? ‘I had a guy contact me who was really into Celtic and Norse mythology and he wanted me to use ash, because of its connections with Tree Law and Yggdrasil, the holy tree of Norse myths.

‘Because the grain structure of ash is wide, this wouldn’t have worked and so we came to an agreement where he chose hawthorn as the main material and we used ash for the bellows.’

The piping scene is a lively and vibrant one, with both smallpipes and border pipes enjoying a resurgence in popularity around the UK. With a keen community of pipers meeting at events such as the recent International Bagpipe Conference in Glasgow, as well as at fairs and concerts, bagpipes have a bright future.

To find out more about Ross’s work at Lochalsh Pipes, visit the website.