Eastern Encounters: Four Centuries of Paintings and Manuscripts from the Indian Subcontinent 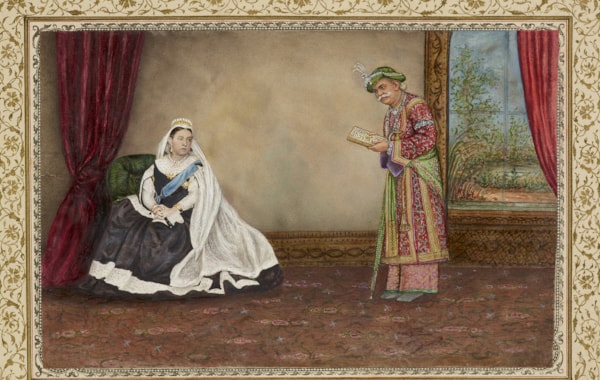 Varanasi artist, Painted frontispiece of The Queens Travels in Scotland and Ireland,translated into Hindi,1875

Highlights from the South Asian holdings of the Royal Collection will be on display, the majority for the first time in Scotland, at Palace of Holyroodhouse in Edinburgh as part of 'Eastern Encounters: Four Centuries of Paintings and Manuscripts from the Indian Subcontinent'.

Eastern Encounters: Four Centuries of Paintings and Manuscripts from the Indian Subcontinent Images

The Royal Collection contains one of the finest groups of South Asian paintings and manuscripts in the world, held in the Royal Library at Windsor Castle. Featuring outstanding examples of the literary and artistic output of the area historically called India, now covered by India, Pakistan and Bangladesh, the collection includes:

Paintings, prints, drawings and photographs from the wider Royal Collection included in the exhibition will explore the 400-year shared history of the British monarchy and the rulers of South Asia, when the exhibition opens in Edinburgh on 3 April 2020.

The rise of the East India Company

The establishment of trade routes to South Asia and the formation of the East India Company, sanctioned by Elizabeth I of England in 1600, opened up the glories of the subcontinent to Britain.  While the 17th century was a period of instability for the British monarchy, in South Asia the Mughal dynasty celebrated a glorious Golden Age.  Richer and stronger than any European power, at its height the Mughal Empire ruled over more than 150 million subjects and extended across most of the Indian subcontinent.
The extraordinary splendour of the Mughal court was captured by artists in intricate paintings and manuscripts. George III was given a number of these magnificent works, forming one of the greatest collections of South Asian works on paper outside the subcontinent.  In 1798, Lord Teignmouth, Governor-General of India, presented the King with six volumes as gifts from the Nawab of Awadh. Among these was the mid-17th-century Padshahnama (‘Book of Emperors’), an illustrated chronicle commissioned by the fifth Mughal Emperor Shah-Jahan as a celebration of his reign and dynasty, described by Teignmouth as ‘the most splendid’ Mughal manuscript he ever saw.
Scottish connections
The rise of the East India Company was also reflected in the gifts of manuscripts presented to successive British monarchs on behalf of the Company and by Company officers. Such works included a Quran owned by Tipu Sultan of Mysore with an illuminated frontispiece and gilt-stamped and painted bindings, presented to George III. Detailed architectural drawings were commissioned from local draughtsmen by Colin MacKenzie, the Scottish Surveyor-General of the Company.  A pen and ink drawing, c.1800, shows a plan of the temple at Srirangam, one of the most important Hindu pilgrimage sites in India.
Following her accession in 1837, Queen Victoria received many illuminated royal letters and gifts of paintings and manuscripts from South Asia. A posthumous portrait of Maharajah Ranjit Singh, the Sikh ruler of the Punjab, c.1842, was sent to the Queen by his successor, Sher Singh, in an unusual jewel-encrusted gold frame with a letter of belated congratulations on her marriage and the birth of her first son. It will be displayed alongside a sketch of his son, Maharaja Duleep Singh, by Queen Victoria. Following the East India Company's annexation of the Punjab in 1849, Duleep Singh moved to England where he became a favourite of the Queen, regularly visiting Osborne House and Windsor Castle.
Queen Victoria received many books written about or dedicated to her from India, including a volume of her own published journals, The Queen’s Travels in Scotland and Ireland, translated into Hindi by the Maharajah of Benares.  The Queen recorded the book’s arrival in England: ‘My book, translated into Hindustani, beautifully illuminated, containing a painting of me, by a native artist, receiving the present from the Maharajah of Benares, bound in inlaid marble, is very curious & really beautiful.’  Victoria's interest in South Asian culture continued throughout her life.  Her studies of the Hindustani language, undertaken in her seventies with her Indian secretary Abdul Karim, are recorded in her Hindustani diaries, which will be displayed in the exhibition with her Hindustani phrasebook.
Eastern Encounters: Four Centuries of Paintings and Manuscripts from the Indian Subcontinent is at The Queen's Gallery, Palace of Holyroodhouse, Edinburgh from 3 April to 13 September 2020.
Discover more about Edinburgh with our 'Edinburgh: Off The Beaten Track' guide - download now!