A Better World? Scotland after the First World War - new exhibition at National Library of Scotland 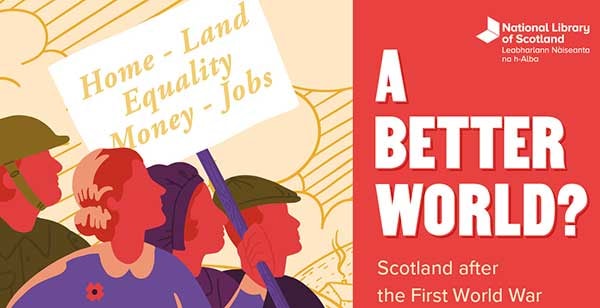 A Better World? Scotland after World War I

The scale of demobilisation, struggle for better living & working conditions and the changing political landscape are among the topics explored in a new exhibition at National Library of Scotland in Edinburgh.

The scale of demobilisation, struggle for better living & working conditions and the changing political landscape are among the topics explored in a new exhibition at National Library of Scotland in Edinburgh.

Marking 100 years since the Armistice, the exhibition explores many aspects of Scottish life in the aftermath of the war, including demobilisation, commemoration, the struggle for better working and living conditions, the changing political landscape, and an emerging Scottish cultural and political identity.

Entitled 'A Better World?: Scotland after the First World War', the exhibition reveals some of the many rare or unique items held in the Library's collections, including a hand-drawn plan of the Scottish National War Memorial, and more personal mementoes for men killed during the war. Visitors will also see newsletters, photographs and other original documents relating to what became known as 'Bloody Friday' — when a violent confrontation between police and 100,000 strikers in George Square in 1919 led to the deployment of armed forces to Glasgow.

Also on display are colourful election flyers and posters from a tumultuous period in politics when Scotland’s electorate swelled to more than two million, and parties were compelled to appeal to women voters for the first time. Scottish identity is explored through the correspondence of Christopher Grieve (Hugh MacDiarmid) with other young creatives — some of whom had seen active service — as they expressed cultural and political ambitions for their country.

An exhibition with a difference

Launching the exhibition, Professor Sir Tom Devine, said: 'The National Library of Scotland is to be warmly congratulated on this innovative and poignant exhibition in commemoration of the ending of the Great War in November 1918. Many such events will take place to mark the centenary of peace in Europe in that year but 'A Better World?' is an exhibition with a difference.

'It focuses on what happened in Scotland after 1918 and the hopes of the nation for a better future which would stand as the best possible tribute to those who had sacrificed their lives in the terrible conflict. Carefully selected original items from the wonderful collections of the Library then demonstrate the realities of what happened in Scotland during the 1920s and 1930s.'

Politicians promised a 'land fit for heroes' to a war-weary populace with a new-found political voice — a population with raised expectations of better homes, improved working conditions and hope for a brighter future. Visitors may well reflect on the struggles and achievements of that period, and on the topics that still resonate 100 years on.

'A Better World?: Scotland after the First World War' runs at the National Library of Scotland, George IV Bridge, Edinburgh, from Friday 16 November 2018 until Saturday 27 April 2019. See an interactive version of the exhibition here.

QUICK LINK: Land ownership in the Highlands after World War I.