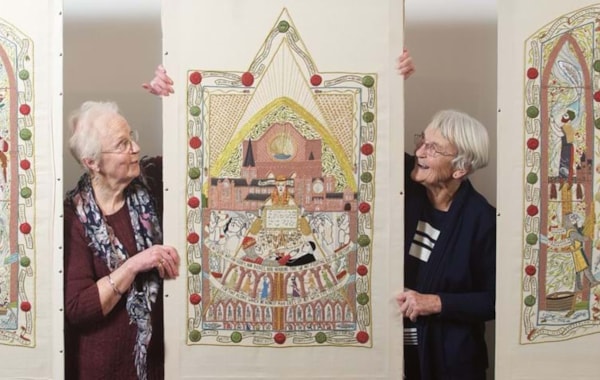 The final stitches have been sewn into the Arbroath Tapestry, ahead of its display at Arbroath Abbey as part of the Arbroath 2020 celebrations.

The intricate, three-panel tapestry was handed over to the safe-keeping of Historic Environment Scotland where it was unveiled at a special reception at The Scottish Parliament. The tapestry will be on long-term display in Arbroath Abbey in early April to coincide with the 700-year anniversary of the Declaration of Arbroath.

Linda Walker, one of the ten embroidery and textile artists who worked on the tapestry, said: 'The Arbroath Tapestry commemorates the 700th anniversary of the Declaration of Arbroath and the history and heritage of Arbroath Abbey so we’re absolutely thrilled it’s to become part of the Abbey’s collection.

QUICK LINK: Why is the Declaration of Arbroath important?

'We created the Arbroath Tapestry for the people of Arbroath so it's only fitting it will be displayed for all to see within our town's historic abbey during the Arbroath 2020 commemorations and beyond.

What do the three panels represent?

The Arbroath Tapestry’s three richly-coloured panels were designed by Andrew Crummy, designer of the Great Tapestry of Scotland. 'The central panel portrays Robert the Bruce and Abbot Bernard of Arbroath writing the Declaration,' explains Linda. 'The two smaller panels represent the role and influence of the Abbey within Arbroath.

'The left panel features William I, founder of the Abbey, along with a fisherwoman, highlighting the importance of the local fishing industry. The right panel represents the many trades which were involved in building and maintaining the Abbey and depicts two Scottish nobles setting sail to deliver the Declaration to Avignon.'