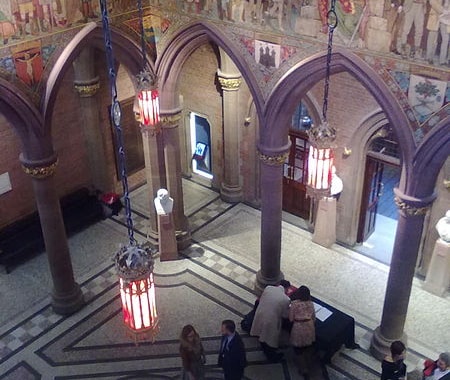 The story of Edinburgh in 101 Objects project includes five items with connections to the life and times of Mary Queen of Scots.

The story of Edinburgh in 101 Objects project includes five items with connections to the life and times of Mary Queen of Scots.

Edinburgh in 101 Objects is a project led by Edinburgh World Heritage which tells the story of Scotland's capital city through 101 historical objects, which are located in easy to access spots around the city.

1. The Maiden, National Museum of Scotland

The Maiden is kept in the Kingdom of the Scots Gallery at National Museum of Scotland in Edinburgh. This four-metre tall oak shaft with weighted iron blade was introduced to Scotland during the reign of Mary Queen of Scots, and used between 1564 and 1710. It was believed to be a humane means of carrying out an execution, as opposed to beheading or burning.

2. Bloodstain of Rizzio, Palace of Holyroodhouse

This darkened area of floorboards within the Palace of Holyroodhouse, where Mary Queen of Scots had her royal court, is marked by a brass plaque and commemorates the death of Mary's companion David Rizzio, who was murdered at the palace in 1566, whilst married was married to Henry Lord Darnley and pregnant with their child, the future James VI/I.

The 'bloodstain' may have been painted on at some stage subsequent to the murder, and the floorboards have been replaced several times since Mary's day, but it stands as a reminder of the terrible deed.

The Honours of Scotland (crown jewels) are the oldest royal regalia in Britain and the crown, sword of state and sceptre of Scotland were used to crown the infant Mary Queen of Scots at Stirling Castle in 1543. Each of these was fairly new to Scotland at the time of Mary's coronation - the crown had been refashioned for the use of her father James V, and the sword and sceptre had been gifted to James IV in 1494 and 1507 respectively.

This work of art decorates the Great Hall of the Scottish National Portrait Gallery and Mary Queen of Scots is one of only eight women who make the line up of this Victorian view of history - the other seven are queens and Jacobite heroine Flora MacDonald. The procession also includes popular figures from history including William Wallace, Robert the Bruce and Robert Burns.

This yew tree at Craigmillar Castle was first recorded in 1890 and stands within the walls of Craigmillar Castle, which was built in the fourteenth century and so the tree may well have existed during the lifetime of Mary Queen of Scots. Mary convalesced at Craigmillar in 1566, following the birth of her son James - did she gaze out of a window onto this tree?

Explore the history of Edinburgh in 101 Objects on the project website.