Gala screening of Outlaw King to take place in Dunfermline 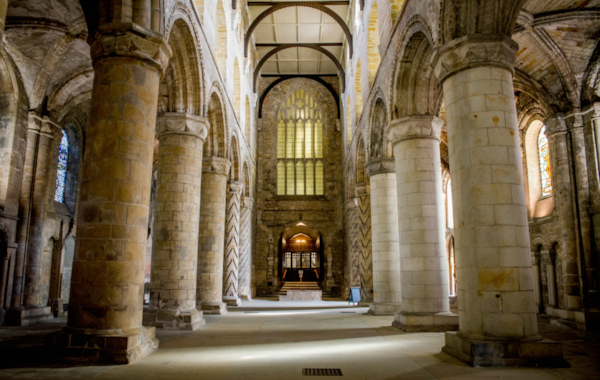 Outlaw King director David Mackenzie and producer Gillian Berrie will be guests of honour at a special gala screening of the historical drama on 5 December 2018 that begins in Dunfermline Abbey, the location of the tomb of Robert the Bruce.

Outlaw King director David Mackenzie and producer Gillian Berrie will be guests of honour at a special gala screening of the historical drama on 5 December 2018 that begins in Dunfermline Abbey, the location of the tomb of Robert the Bruce.

Filming Fife and VisitScotland, in association with Sigma Films and Fife Cultural Trust, are organising the event in which attendees will have a special tour of the Abbey and Church before a screening of Outlaw King in the nearby Dunfermline Carnegie Library and Gallery, followed by a Q&A with the director and producer.

David Mackenzie, Director of Outlaw King, said: “When location scouting for Outlaw King I felt we had to use Dunfermline Abbey, not only due to its stunning architecture but, it being the resting place of Robert the Bruce, it was fitting to have the Abbey play a part in a film which examines the important legacy of the man himself.

“I had a wonderful experience filming at the Abbey, surrounded by such fascinating history we felt a real connection with Robert the Bruce and we were truly grateful to all the staff for accommodating us. I’m delighted to be asked to return to Dunfermline for this special screening.”

The real story of Outlaw King

It comes as VisitScotland, the national tourism organisation, launches an interactive map of Scotland featuring the filming locations of Outlaw King and historic sites connected to Robert the Bruce, to inspire visitors to explore the real history behind the Netflix film.

On the trail of the Outlaw King highlights 20 filming locations and 24 sites linked to Robert the Bruce across the country, from Annandale in Dumfries and Galloway, where the King of Scots was raised, to Claigan Coral Beach on the Isle of Skye, which portrays the Isle of Islay in the film, and of course, Dunfermline Abbey itself.

Outlaw King was released globally on Netflix, which has 130 million paid memberships in more than 190 countries, on 9 November. Shot entirely in Scotland (according to the borders of 1320) it is said to be the largest production, budget-wise, to be made in the country to date.

The film charts the story of Robert the Bruce (played by Chris Pine), from defeated nobleman in 1304 to victorious King of Scots at the Battle of Loudoun Hill in 1307.

How to get tickets

Tickets for the Outlaw King screening are available here.

Download History Scotland's digital guide to Robert the Bruce and the Battle of Bannockburn here.