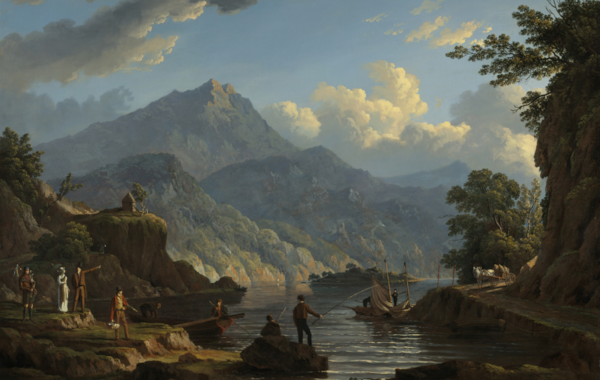 Exhibitions exploring romantic visions of Scotland, robots and conscientious objectors are among the highlights of the National Museums Scotland 2019 programme, announced today (16 November 2018).

Exhibitions exploring romantic visions of Scotland, robots and conscientious objectors are among the highlights of the National Museums Scotland 2019 programme, announced today (16 November 2018).

The 2019 programme, which was announced today, will feature the unveiling of three new permanent galleries at the National Museum (more details here) plus major exhibitions taking in 500 years of robotics, diversity in fashion, the fascinating world of parasites and the story of how highland traditions came to be adapted and established as enduring international symbols of Scottish identity as a whole.

The major summer exhibition Wild and Majestic: Romantic Visions of Scotland will explore how in the era of the European Romantic movement of the 18th and 19th centuries, Scotland became the subject of international fascination.

By the end of Queen Victoria’s reign, an adaptation of the cultural traditions of the highlands had become fixed as a representation of wider Scottish identity. The exhibition will show how this romanticised ideal of Scotland was not purely invention, as cultural traditions were preserved, idealised and reshaped to suit contemporary tastes against a background of political agendas, economic and social change from the end of the Jacobite challenges to the reign of Queen Victoria.

Wild and Majestic: Romantic Visions of Scotland is supported by Baillie Gifford Investment Managers and runs from 26 June to 10 November.

Through rich displays which incorporate significant items on loan from private and public sources, the exhibition will present a complex and contested history through key moments such as the Ossian controversy, the foundation of Highland societies, the overturning of the ban on Highland dress, the pageantry around the 1822 royal visit to Scotland by King George IV, the Highland tourism boom, and the creation of a Romantic idyll for Queen Victoria at Balmoral.

Developed by the Science Museum, Robots (18 January to 5 May 2019) will explore 500 years of humanity’s quest to re-imagine ourselves as machines. This major exhibition will feature a unique collection of over 100 robots, from the earliest automata to those from science fiction and modern-day research labs.
Body Beautiful: Diversity on the Catwalk (23 May to 20 October 2019) will examine how, and to what extent, the fashion industry is championing alternative representations of beauty on the catwalk, in advertising and editorial, and behind the camera.
Parasites: Battle for Survival (6 December 2019 to 19 April 2020) will explore the fight to eradicate five neglected tropical diseases and the role of research taking place in Scotland to do this. Malaria, Guinea Worm, Sleeping Sickness, Schistosomiasis and Leishmaniasis are among those diseases described as neglected because they remain major epidemic diseases in many countries.

At the National War Museum in Edinburgh Castle, Conscience Matters (8 March 2019 to 23 February 2020) is the result of a major research project into conscientious objectors in Britain led by the University of Edinburgh. During the Second World War, over 60,000 people registered their objections to fighting in the Second World War on grounds of conscience. The exhibition reveals the stories of the men and women who chose not to fight for religious, political or moral reasons.

For more on National Museums Scotland, visit their website.