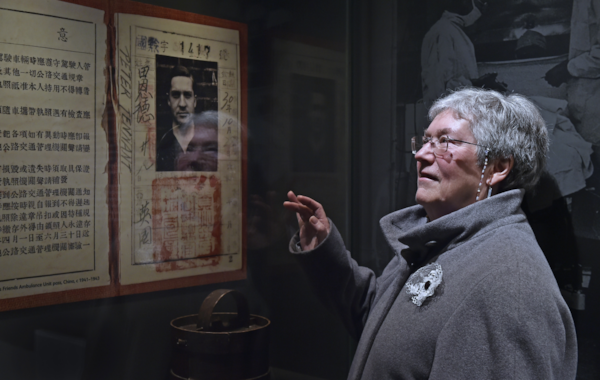 A new exhibition, Conscience Matters, at the National War Museum in Edinburgh explores the little-known story of British conscientious objectors of the Second World War.

A new exhibition, Conscience Matters, at the National War Museum in Edinburgh explores the little-known story of British conscientious objectors of the Second World War.

In the Second World War, the reintroduction of conscription meant that British citizens were expected to contribute directly to the war effort. Those who refused on the grounds of a ‘sincere and genuine’ opposition to military service could apply for an exemption. People objected for a variety of religious, political and humanitarian reasons, and were known as conscientious objectors.

To gain exemptions from conscription on the grounds of conscience, individuals were required to appear before a tribunal and produce evidence about their honesty and commitment to their principles. Conscience Matters draws on the testimonies and experience of some of the 60,000 men and women who applied for exemption from military service in the name of conscience, with items on display illustrating the stories of those who objected by exploring their backgrounds, their moral dilemmas, and the difficult journeys they faced in trying to prove their convictions.

The exhibition features paintings, music, letters, diaries, poems and speeches made by conscientious objectors in Britain during the Second World War as they grappled with the meanings and implications of conscience in a time of war.

Otherwise invisible and private convictions were made to be public, persuasive and tangible. The exhibition tells the stories of individual conscientious objectors including

The exhibition also examines the application process, the reasons people had for opposing conscription, and what happened to them as a result.

If successful in their application, conscientious objectors could be exempted from national service altogether, or more commonly assigned to other non-combatant roles such as bomb disposal, hospital work or agricultural labour. Some of those whose applications were unsuccessful were ultimately imprisoned.

Exploring the implications of conscience

The exhibition draws on a major research project led by the University of Edinburgh to study British conscientious objectors in the Second World War.  The project examines the motivations and dilemmas of conscientious objectors, and the ways in which a decision not to take up arms affected both their close relationships and their rights and obligations as British citizens. The research is funded by the European Research Council.

Tobias Kelly, Professor of Political and Legal Anthropology at the University of Edinburgh said: “Britain was one of the first countries in the world to grant a legal right to conscientious objection to military service during war time. In the Second World War, over 60,000 people registered as conscientious objectors. Although now largely forgotten, many of these people went on to become significant cultural and political figures in post-war Britain, founding Amnesty International and Oxfam, amongst other things. Their fascinating stories will invite visitors to think about the wider nature and implications of conscience and to ask how far we might go for a cause in which we believe.”