Prestonpans One-to-One: Recreating the Battle of Prestonpans in paper 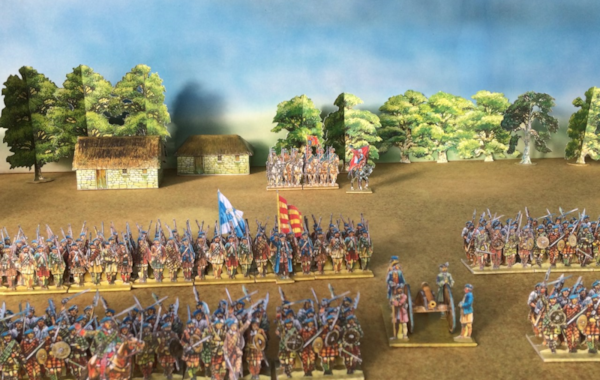 Prestonpans One-to-One: Recreating the Battle of Prestonpans in paper

Ahead of a living history event to recreate the Battle of Prestonpans on 15 and 16 September, we talk to Peter Dennis and Arran Johnston about their re-creation of the battle, which forms part of the Prestonpans commemorations.

Ahead of a living history event to recreate the Battle of Prestonpans on 15 and 16 September, we talk to Peter Dennis and Arran Johnston about their re-creation of the battle, which forms part of the Prestonpans commemorations.

Peter Dennis: From childhood interest to passion for history

I’ve been making my living as a freelance illustrator for forty years. I specialised in historical subjects and eventually managed to focus on my real love, military history. I was able to follow my boyhood illustration heroes by working for Osprey publishing, completing over 200 books and other projects with them.

My military interest grew out of playing with toy soldiers, which somehow continued seamlessly from childhood to manhood. By the time I made my first teenage visit to The Army Museum in Paris, I was already a dedicated wargamer and figure collector. There I encountered a display of paper soldiers made by the Imagerie d’Epinal in the 1870s and I was so taken with them that the idea of making some took hold. It was much harder than I imagined though, and discouraged by the results, I allowed the thought to drift to the back of my mind for thirty years or so.

EXTRA READ: The site of Prestonpans in Outlander

It was a chance bit of idle paper-folding which showed me how to make a group of wee men in ranks. As soon as I saw the scrap of paper tossed onto my desk I could see a way to realise my old idea, and within 10 minutes the first stand of soldiers was made. Wargaming has always been an expensive hobby, both in time and treasure. It seemed to me, with the means of colour reproduction readily to hand for most people, that paper miniatures which you could print yourself could come at the hobby from a different angle and make considerable savings in both of those areas. 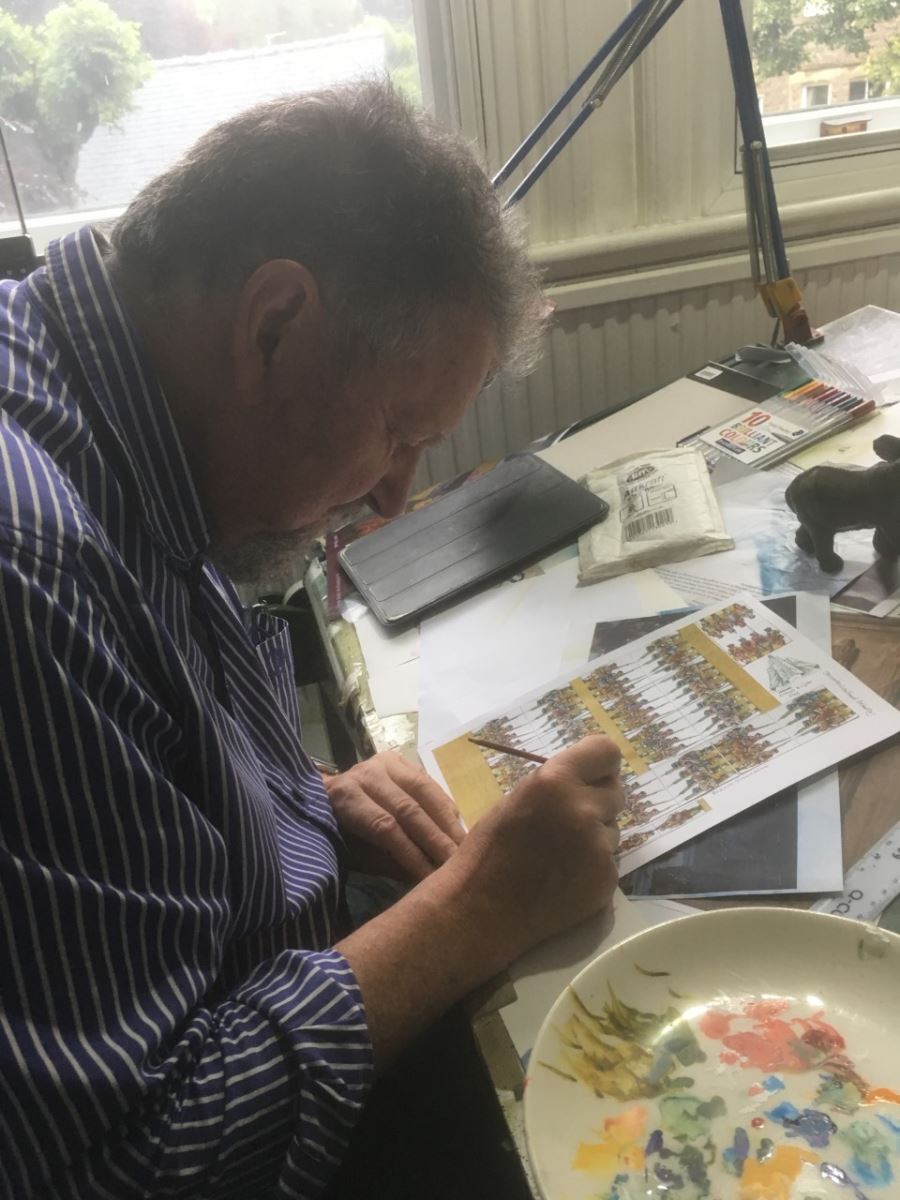 How the 'paper boys' are designed

Designing a set of paper soldiers (we have come to call our style of soldiers ‘Paperboys’) is like designing anything else: somewhat trickier than it looks at the beginning. They are flat, of course, and because wargamers face each other across a table, laid out with terrain and armies, the paper armies face each other too, presenting their front to the enemy, and their backs to their friends. The traditional German flat figures are mostly seen from the side, which makes individuals look very dynamic, but which leaves gamers facing rows of anonymous edges.

My mother came from Bo’ness in West Lothian and the summers of my boyhood were always spent in Scotland. General Wade’s roads and bridges were mentioned often on our trips and the Jacobites loomed large in my reading. The tartan-clad fellows seemed a perfect subject for paper soldiering and formed an early personal collection before I decided to publish some of my efforts in a series of British History themed books with Helion and Company.

I recently revisited the subject in much greater depth in the paper soldiers book The Jacobite ‘45 and I was delighted to hear that Arran Johnston – whose own book on the Battle of Prestonpans has one of my illustrations on its cover – was planning to use my figure designs to stage a diorama of the battle.

I grew up with stories of the Jacobites and their great adventure in 1745, and in my teens became involved in commemorations and re-enactments which helped keep this important history alive in people’s imaginations. Shortly before I left university I became involved with a community heritage trust based on Prestonpans battlefield, and ever since I have been closely engaged with the study and interpretation of the battle.

It was in Prestonpans that Bonnie Prince Charlie won his first and finest victory, and for over ten years I have been working to promote understanding of the battlefield site and campaigning for its protection. I have also been kept busy by organising annual commemorations and a series of increasingly large and ambitious re-enactments of the battle.

Last year Helion and Company published my narrative analysis of the battle as On Gladsmuir Shall the Battle Be!. I was asked to prepare a brief for an artist who would illustrate the cover of the book, and this was how I found myself in contact with Peter Dennis. I was already familiar with his military artwork of course, and he created for my book a very powerful and engaging image of a key moment of the battle. 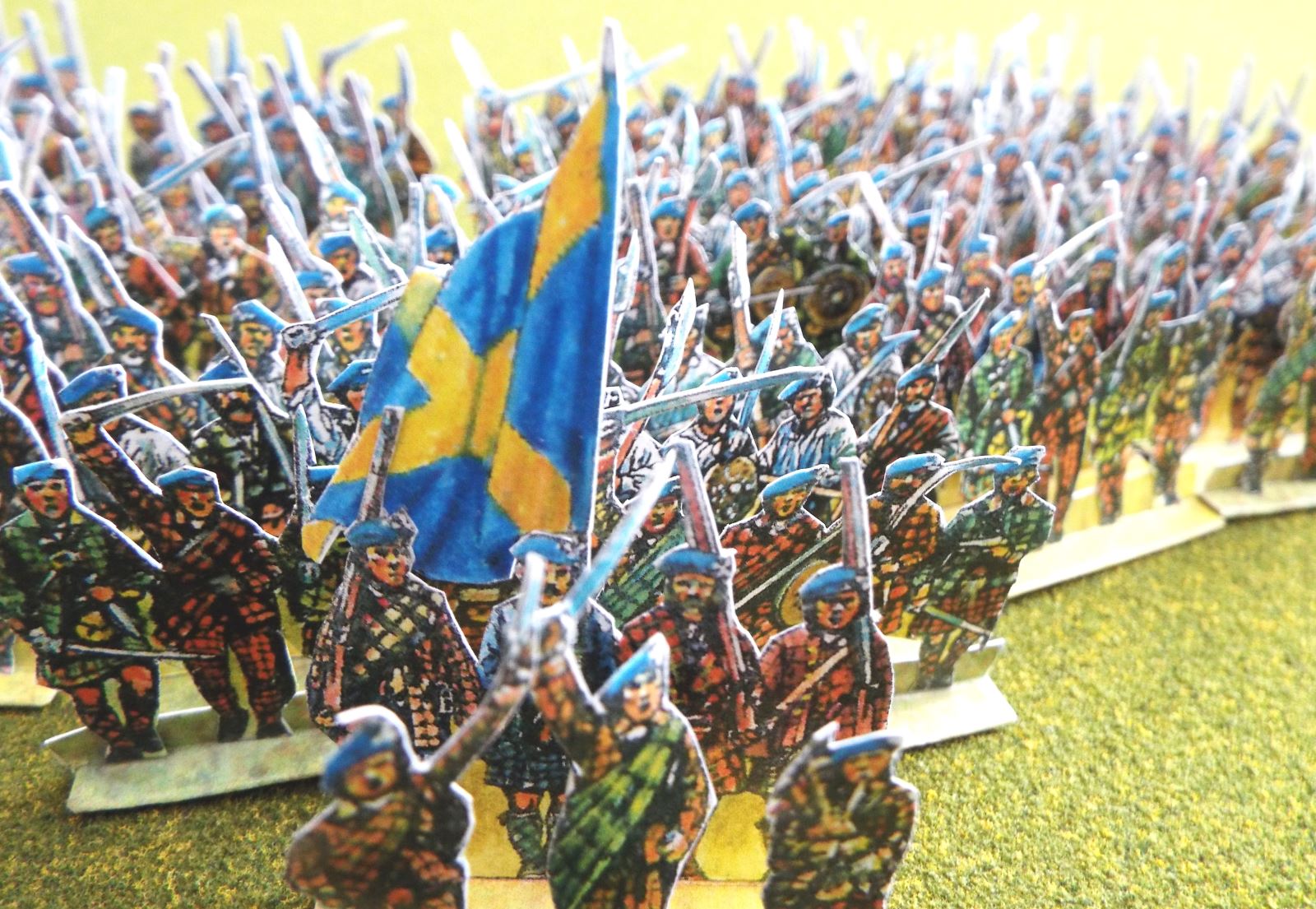 After hearing that Peter was preparing a Paperboys book on the Jacobite risings, I wondered about the potential for such modelling to aid with educational initiatives relating to the battlefields. There is something so compelling about the visuals of the Paperboys, and so charming about the simplicity of paper as a medium, that although I am not a table-top war-gamer I was strongly drawn to the idea.

When describing the Battle of Prestonpans, whether at lectures or on walking tours, I encourage people to visualise the complexities of moving armies and their equipment around a landscape. But not everyone can image what a battle line actually looks likes, and to create a 1:1 ratio model out of metal or plastic figures would be prohibitively expensive for a small charity like the trust at Prestonpans. Peter’s Paperboys changed that: the size of the army you create is limited only by how many photocopied sheets you are willing to make, and how many scissor-blisters you are prepared to endure!

Flushed with senseless enthusiasm, I proposed to the trustees that for the 2018 anniversary of the battle I would create a Paperboys Prestonpans with a 1:1 ration of soldiers to figures. For the first time, we would be able to show people exactly how the two armies looked on the morning of the battle.

Since then I have been cutting, gluing and trimming more than 5,000 paper soldiers using Peter’s designs, complete with accurate regimental flags and uniform details. The completed armies will take up an entire room to display, and should be an impressive visual guide to what it looked like on the field in 1745.

After seeing the first completed regiments, Peter was kind enough to design special figures of the two rival commanders, including a new Prince Charlie so that he could be shown dismounted as he was at the battle. I am looking forward to showing the armies to Peter when he visits Prestonpans for the re-enactments in September!

Prestonpans One-to-One will be on display at the Prestoungrange Gothenburg (EH32 9BE) from 8-23 September 2018, as part of a range of events marking the anniversary of the battle. The largest ever re-enactment of the Battle of Prestonpans is to be held on 15th and 16th September, following a Memorial Parade on Saturday 15th. For full details of all the events taking place, visit East Lothians Battles.