The Luxury of Time: Clocks from 1550-1750, exhibition at National Museum of Scotland 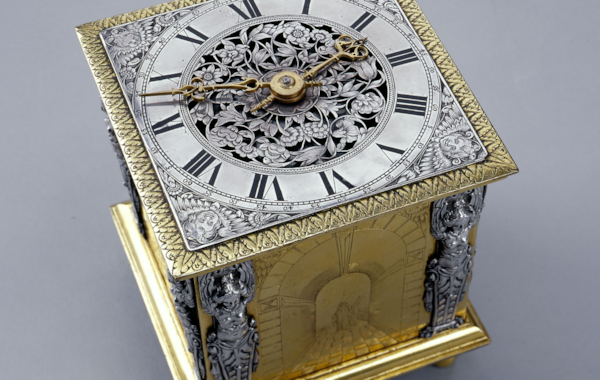 A special display of rare and significant historical timepieces telling the story of a golden age of innovation in British watch and clockmaking will go on show at the National Museum of Scotland from 4 October.

The Luxury of Time: Clocks from 1550-1750, exhibition at National Museum of Scotland Images

A special display of rare and significant historical timepieces telling the story of a golden age of innovation in British watch and clockmaking will go on show at the National Museum of Scotland from 4 October.

The Luxury of Time: Clocks from 1550-1750 will feature objects from the private collection of Dr John C Taylor OBE, an engineer, entrepreneur and one of the UK’s most prolific inventors.
The 25 objects to be shown demonstrate the golden age of British clock and watch-making and illustrate the delicate workmanship and incredible technical skills involved. Exquisitely made and decorated in precious metals, they were labour intensive, luxury items that were at the cutting edge of technology. Many early examples were seen as the ultimate status symbols of their day and were only affordable for the very rich.

Objects to be displayed include two beautiful watches by David Ramsay, a Scot living in London who was the Royal Clockmaker to King James VI & I and the first master of the Worshipful Company of Clockmakers founded in 1631. The Ramsay watches on show will include a beautiful silver gilt-metal astronomical watch featuring an engraving of King James VI & I and an intricately-engraved oval watch featuring a backplate bearing the words David Ramsay Scotus me fecit reflecting the maker’s pride in his Scottish heritage.
Prior to the 17th century, clock and watchmaking was primarily the domain of mainland European makers. As many fled to Britain to escape religious persecution, they passed on the skills of their trade and pioneering British clock and watchmakers soon made London one of the dominant centres of clockmaking.
The Luxury of Time: Clocks from 1550-1750 will give a unique insight into how this industry developed. The four display cases will tell a fascinating story of scientific and technical advancement during periods of extreme turmoil, from early clocks made by blacksmiths and which kept time to around a quarter of an hour a day, to the invention of the pendulum clock and the balance spring which enabled much more accurate timekeeping to within a few seconds a day.
Royal patronage and collaborations between important makers will be explored, including an example from c1650 of the only known collaboration between 17th century pioneers of clock mechanism design, Edward East and Ahasuerus Fromanteel. Both could create everything from a tiny watch to an elaborate clock.
16th-17th century maker Thomas Tompion was the first to apply mass production methods to high quality watches, subcontracting the manufacture of parts and whole movements to other makers before a team of apprentices finished the timepieces in his workshop. Watches were sometimes referred to as Tompions as he made so many. A beautiful quarter chiming repeating watch included in the display features a secret latch system to protect its intricate mechanism from being copied by rivals.
Dr John Taylor, OBE said: “Clocks and watches were the first manufactured mechanical objects and it’s great to show some early examples in the National Museum of Scotland. The innovation produced by these wonderful articles initiated the necessity to protect the intellectual property behind their development – something that we take for granted today.”
Most of the timepieces included are in working order and some will be shown in operation at selected periods during the run.
The exhibition is at National Museum of Scotland, Chambers Street, Edinburgh from 4 October 2019 to 26 January 2020. Full details are on the NMS website.
QUICK LINK: Sir Jackie Stewart to open new Motor Museum