Video and report: year of events to mark 200th anniversary of the man who gave the one o'clock gun to Edinburgh 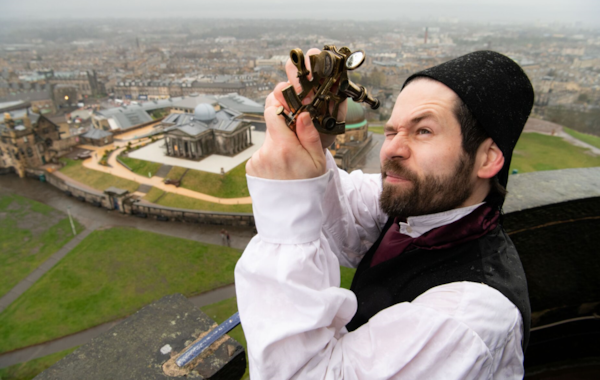 A new exhibition at the Nelson Monument in Edinburgh is now open, part of a series of events celebrating the life of Edinburgh's 'forgotten astronomer' Charles Piazzi Smyth.

Video and report: year of events to mark 200th anniversary of the man who gave the one o'clock gun to Edinburgh Images

A new exhibition at the Nelson Monument in Edinburgh is now open, part of a series of events celebrating the life of Edinburgh's 'forgotten astronomer' Charles Piazzi Smyth.

Housed in the Nelson Monument Museum on Calton Hill, the new exhibition aims to bring about a new awareness of Piazzi Smyth’s work and that of his wife Jessica, forming part of a series of activity around the 200th anniversary of his birth. Piazzi Smyth is a significant figure in Edinburgh's history as in 1852 he started the Time Ball service which involved hoisting a large ball from the top of Nelson Monument which would drop at exactly one o’clock every day as a as a time signal to ships docked in Leith harbour.

A year earlier, he had added an audible element and set up the One O’ Clock Gun service from Edinburgh Castle, stretching a cable all the way from Calton Hill to another clock on Castle Rock, which fired the Gun. Although the cable is no longer in place both the Time Ball on Nelson Monument and the One O’ Clock Gun still remain active today, providing a daily reminder of Piazzi Smyth’s legacy to the city.

As Astronomer Royal for Scotland he spent much of his time and did much of his work from the City Observatory on Calton Hill, which recently reopened to the public after 100 years and can be visited today.

The exhibition is part of the celebration of Charles Piazzi Smyth’s 200th anniversary including a series of public talks, a citizen science experiment with the One O' Clock Gun, Lauriston Castle lecture; ‘Stars, Time and Mountains’ and a Symposium at the Royal Society of Edinburgh. More events and more information at the anniversary website.

Regius Professor of Astronomy at the University of Edinburgh, Professor Andy Lawrence said: “Piazzi Smyth and his wife Jessie are great Edinburgh characters but are forgotten in the city where they worked. Astronomers tour the world to observatories because of Charles’ work. His scientific work underpins much of our work today.

“As we launch the exhibition, we are also beginning a grand Time Gun Public Experiment. As a first step, we just want to find out who can hear the One O’ Clock Gun. Any day between 8 and 14 April, we are asking citizens and visitors to listen out for the Gun, and let us know via social media with the hashtag #IHeardTheGun, and tell us where they were. Later in the year we will get more ambitious and time the delay all over Town!”

QUICK LINK: Ten historic attractions within an hour of Edinburgh