The Scotland Rugby team for the first Rugby International, played at Raeburn Place, Edinburgh on 27 March 1871

In our brand new read, David Stark explains how the Scottish governing bodies of both soccer and rugby asserted autonomy from their English counterparts.

A report in the Scotsman on the 133rd annual meeting of the International Football Association Board (IFAB) which took place in Aberdeen on 2 March 2019 may well have passed many readers by. Nevertheless, it was a meeting with far-reaching consequences for the sport, because it approved changes to the rules of association football (also known as ‘soccer’ nowadays) which will be adopted by national associations across the globe.

It may appear curious that IFAB which is the worldwide custodian of the rules of soccer comprises delegates from only five organisations: each of the four UK ‘home’ football associations and the global governing body for soccer, FIFA.

This surprising fact provides a tantalising glimpse of the history behind the growth of the sport in the 1870s and 1880s in which the Scottish Football Association (SFA) played a pivotal role, and which was mirrored in many respects by its rugby counterpart, the Scottish Football Union (SFU; The SFU was renamed the Scottish Rugby Union in 1924.)

In both cases, the determination of the SFA and SFU to remain independent of the English-based governing bodies, the Football Association (FA) and the Rugby Football Union (RFU) during their sports’ formative years initiated a series of events which resulted in the creation of administrative structures on which the expansion of both codes of football would be built. In doing so the SFA and SFU established themselves as popular and important national institutions within late-Victorian Scottish society.

The history of the early years of soccer and rugby is very much a shared one, as the organisers of each code sought to formalise and increase participation in their sport. Indeed, the first rugby international came about as a direct result of the reaction of Scottish rugby enthusiasts to a series of exhibition soccermatches organised by the FA secretary, Charles Alcock.

This series, designed to encourage the spread of interest in the round ball game, and advertised as ‘internationals’, commenced in 1870 between supposedly representative teams of Scotsmen and Englishmen in London. The selection of both teams by the FA, however, received a generally hostile press in Scotland, as few of the ‘Scottish’ players had been born there, and claims were made that the only links some of them had with Scotland was a fondness for whisky, or that they had once gone shooting in the Highlands.

A public argument also took place in the pages of newspapers between Alcock and a leading Scottish proponent of rugby H.H. Almond, partly over the selection of the Scotland team, and partly because the matches were being played according to the association rules of football rather than the rugby rules, the latter being much more popular in Scotland at that time. As a result, the Scottish rugby fraternity felt that Alcock’s series of matches did not allow the selection of ‘the best [football] team that Scotland could turn out’ to play against England and which subsequently reflected badly on the nation’s athletic prowess.

To rectify the situation, and to salvage national pride, they issued a challenge to the English to play a game according to the rugby rules which was duly accepted. Thus, the inaugural international rugby match took place in March 1871 at Raeburn Place in Edinburgh where the Scotland team, selected by a committee of representatives from Scottish rugby clubs, defeated England in front of a crowd of some 4,000 spectators.

The first official international soccer match was held in Glasgow the following year in November 1872, when Queen’s Park, the pre-eminent association football club in Scotland took responsibility for organising the Scotland team (and supplied all eleven players). 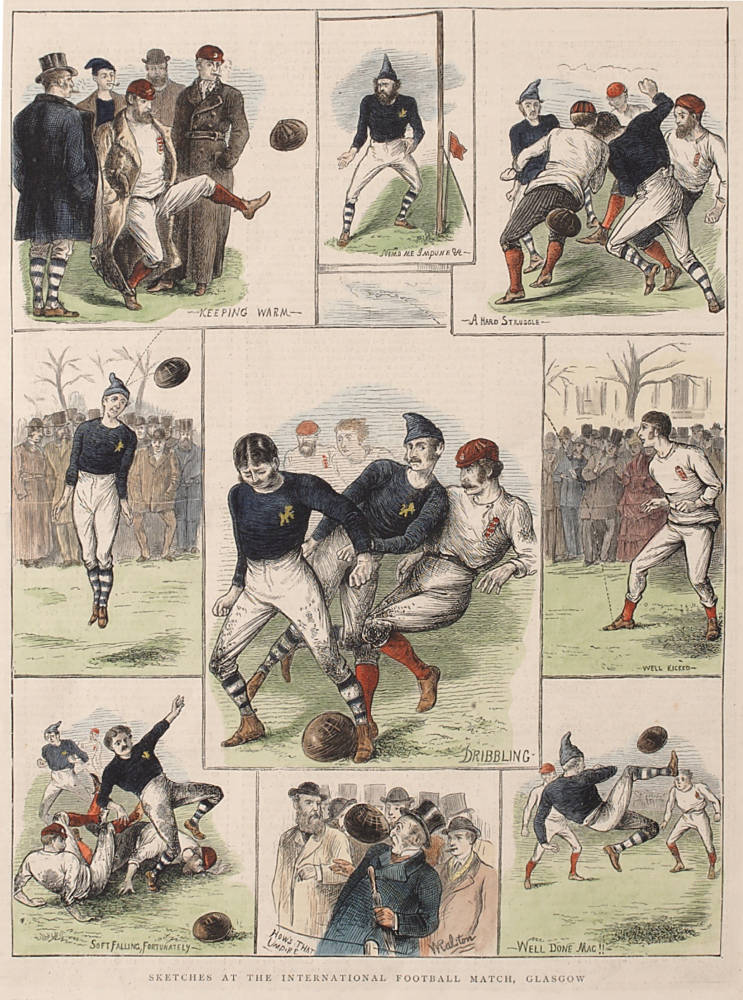 Earlier that year, the FA had done little to quell the argument over Scottish team selection when it announced that its series would continue with two games per annum, one in Scotland and one in England. However, this position changed during March 1872, most likely as a result of Queen’s Park’s visit to London to play the Wanderers, ‘the embodiment of the [association] code in England’, in the inaugural FA Cup tournament.

Importantly, Charles Alcock was also the secretary of the Wanderers and presumably would have been in close contact with David Wotherspoon, the secretary of Queen’s Park. On his return to Glasgow, Wotherspoon announced that the international match with England would take place during the following season and that players interested in representing Scotland should contact Queens Park.

As with the international rugby match the previous year, the match met with the approval of the Scottish press and public of whom some 3,000 attended. Henceforth the FA made no further attempt to select a Scottish team.

The need for formal organisation of the sports was met twelve months later, when ruling bodies for rugby football and association football in Scotland, the SFU and the SFA respectively, were founded within a fortnight of each other in March 1873. Their task being to administer their sports including the definition of the laws that their member clubs played under, and the selection and organisation of international matches, initially against England and by the early 1880s in both codes against Wales and Ireland.

These two major responsibilities, rules and internationals, however, were to prove to be points of friction between the SFA and SFU and their English counterparts, as the organisation of smooth-running internationals between the two countries was often at odds with the ability of each ruling body to determine the rules of the game within their jurisdiction, without reference to a higher authority. An additional point of friction being that the FA and RFU considered themselves to be that higher authority.

Initially, international matches were played under the rules of the home team, however this situation was far from ideal and inevitably led to disputes. These culminated during the 1880s and were resolved by the creation of overarching administrative structures for both codes of football which ensured that no single national ruling body would have control over the sport.

Extracted from an article by David Stark published in the Jul/Aug 2020 issue of History Scotland. Get your copy here.