Before the names of Burke and Hare graced the history pages for their supposed ‘bodysnatching’ dealings, it was the students and anatomists themselves who took to raiding local graveyards in order to procure their ‘subjects’ for dissection.  Legal supplies of anatomical subjects in the early to mid-nineteenth century on which the medical profession could train, were scarce to say the least and in order to meet an ever increasing demand, additional supplies had to be found.

Evidence of these first midnight forays would often be found strewn across the churchyard in the mornings, or the bodysnatchers would be discovered red handed with the cadaver in tow; either slung over their shoulder or propped up in some other ungodly fashion waiting to be delivered to the dissecting room.

All students get up to mischief, but perhaps none as much as the medical students of nineteenth-century Scotland. The life of a medical student in Glasgow wasn’t much different from one in Edinburgh or Aberdeen; it just so happened that Glasgow students had the added bonus of being able to pay their fees with cadavers rather than money. 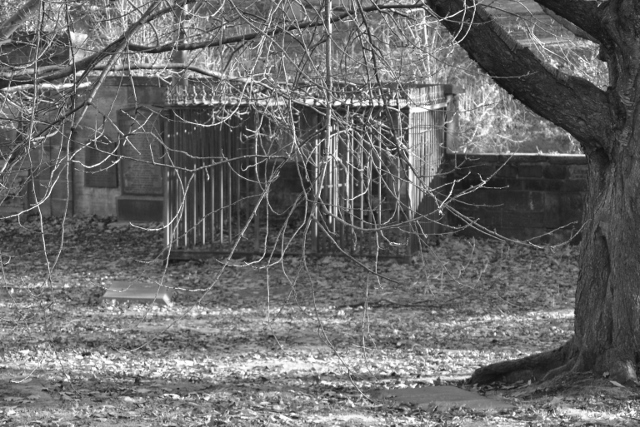 In the summer of 1823, John Carmichael, a medical student from Glasgow, found himself in rather an unfortunate predicament. During their rounds of the Cathedral grounds, watchmen disturbed a group of bodysnatchers around the grave of recently interred John Dempster.

Beating a hasty retreat, all the gang escaped, all except Carmichael. Despite being a spritely nineteen-year-old, he’d failed to make it cleanly over the graveyard wall and was apprehended; one leg still inside the grounds of Glasgow Cathedral.

One sad tale to come out of Glasgow during these early days of bodysnatching occurred in Blackfriars graveyard. A failed bodysnatching attempt by three students saw one of the unsuspecting youths trip over the wire of a cemetery gun, aimed at the mouth of a recently filled grave. The gun discharged, killing the student in the process. Shocked to say the least, his friends tied their legs together in a false ‘two-legged race’ and quickly returned to their lodgings. When morning came, the two students put it about that their friend had committed suicide. It is not known what happened to his body.

Elsewhere in Scotland, students were conducting midnight forays with differing degrees of success. Aberdeen students frequently targeted the graveyards of Banchory-Ternan and Banchory-Devenick, not to mention St Fittick’s churchyard in Torry, Aberdeen where the body of ninety-year-old of Janet Spark was lifted one December night in 1808. However, she was hastily re-buried in the sand banks of Nigg Bay when the students involved feared detection.

Planning on retrieving Janet’s body later, their well laid plans were thwarted when a storm blew in and rendered all possible rescue missions hopeless. Janet’s body was later to be discovered washed up on the shores of Nigg Bay two months later.

Two novice bodysnatching students were stopped at the Mearns toll-bar in Renfrewshire one night while concealing the dead body of an old man. The unsuspecting toll-keeper failed to notice that the third ‘passenger’ in the gig that night; the one who was securely propped up between his two friends, had rather a sickly pallor. When questioned, the student’s said their ‘friend’ was sick and they were taking him home. With a sigh of relief, they made their way back to their school in College Street, Glasgow, the old man destined for the dissecting table.

The demand for fresh cadavers, coupled with the need for students and anatomists to keep an increasingly low profile after being linked to an ever growing number of churchyard raids, resulted in the rise of the professional resurrectionist.  And so the names of ‘Merry Andrew’, Henry Gillies and Thomas Hodge amongst others would grace the pages of our history books, their exploits leading to parish churches across the country installing a variety of anti-bodysnatching devices. The question is, how many of them are still keeping safe the bodies buried beneath them?

Here are the stories of the men who robbed graves during the winter months of 1742-1832, selling fresh cadavers to anatomists up and down the country all in aid of medical advancement. Stories involving medical students and anatomists are retold as we discover the cases that have become hidden in history.