John Ogilby’s Britannia (1675), a huge lavish volume of road maps and descriptions of towns, was the first road atlas of any country.  Ogilby was a Scot, but despite the title there is no Scottish road or town in the book.  This is one of many indications that the book, which cost a fortune to produce, had a very odd agenda.

Author and antiquary John Aubrey worked for Ogilby and tried to discover his biography, but Ogilby would not reveal where he had been born except in a riddle which was then defaced. Although he was by then over 70, Aubrey still thought of him as “a cunning Scot” and could not figure out what he was up to. He understood his employer to have been born in 1600 near Edinburgh and brought to London soon after, where his father was imprisoned for debt.

Londoners resented the influx of Scots who had followed King James VI to the city, and there were warnings of rioting. A large number of new immigrants fled back north.

Ogilby believed the story of his parentage until the early 1650s when he encountered James Ogilvie, the son of the Earl of Airlie, in the Tower of London, and was evidently told that he was the Earl’s secret brother.  The man he had thought was his father had, it seems, adopted him when the Ogilvies were embroiled in a ruinous feud. The birthplace he then hid from Aubrey was (as he told his astrologer, Elias Ashmole), Kirriemuir, the location of Airlie Castle. 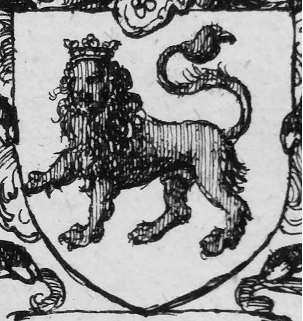 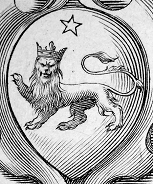 The relationship was indicated in Ogilby’s magnificent 1654 illustrated translation of Virgil, which included heraldic devices for Airlie and Ogilby (shown here).

The connection was concealed because they had begun working in partnership to help overthrow Cromwell. Airlie’s castles had been destroyed and his lands ravaged by the Earl of Argyll, head of the Campbells and a Cromwellian. Ogilby was a staunch royalist.

Eventually Charles Stuart was put on the throne. Ogilby organised his coronation festivities, and Argyll was executed.  But Charles was unable to exercise the power his father had sought, and decided to find a way to get it. He signed a secret treaty with Louis XIV to give him money and an army.

Britannia was part of the plot, created to help guide a French invasion to support Charles’ coup and help him manage the kingdom.  With French money and an invasion army on stand-by if needed, Charles stopped calling parliaments and installed loyal men in local administrations, guided by Ogilby’s great book.

A further part of Charles’ plan was to diminish the independence of Scotland, which had played such a large part in his father’s fall and where he himself had been treated as a puppet king when he first claimed his throne there in the time of the Covenanters. The frontispiece to Britannia appears like a harmless image of life in the countryside and people using the new maps. However, it in fact contains visual clues to the book’s agenda, and one of its most startling (but evidently un-noticed) images is the Royal Standard flying from a flagpole.

The top right section of the standard is Scotland, normally showing the Scottish lion, with only two feet on the ground.  But in Ogilby’s version, it has three feet on the ground. This is the English lion. The minister handling Scotland, Lauderdale, would do whatever it took to ensure that Charles’ wishes were effective and his power supreme. In November 1669 he reported to Charles that ‘never was King so absolute as you are in poor old Scotland.’ Ogilby’s version of the Royal Standard made it clear that every vestige of Scottish sovereignty was to be considered ended.

Britannia was created by a cunning Scot, to help Stuart absolute ascendancy over the whole of Britain.

Alan Ereira is the author of The Nine Lives of John Ogilby, published by Duckworth Overlook at £25.

In this book, Alan Ereira brings a fascinating hidden history to light, and reveals that Ogilby’s celebrated Britannia is far more than a harmless road atlas: it is, rather, filled with secrets designed to serve Charles II’s sinister purpose. This is the story of a remarkable man, and of a covert journey which gave birth to the modern world. With 41 black-and-white illustrations including 6 maps.