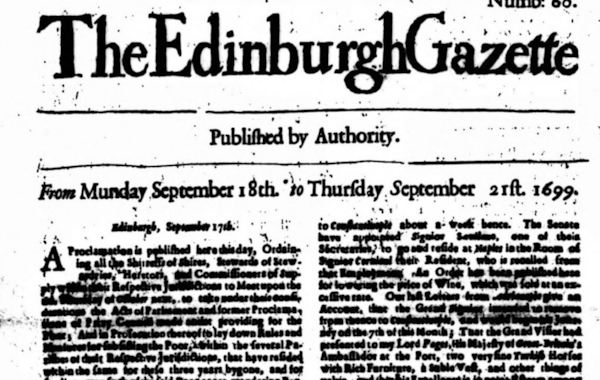 The Edinburgh Gazette, first published in 1699, has become the oldest newspaper in the BNA's online collections. We take a look at the newspaper's history.

Alex Cox of the British Newspaper Archive explains the significance of this newspaper for family historians and anyone interested in local history.

The Edinburgh Gazette represents the oldest title presently available on our Archive, with pages from the year 1699.

In the 17th century, newspaper production was in its infancy, the early 1600s marked by heavy government censorship. However, after the Civil War, the demand for news grew, and out of this was born the London Gazette in November 1665, which was first known as the Oxford Gazette. 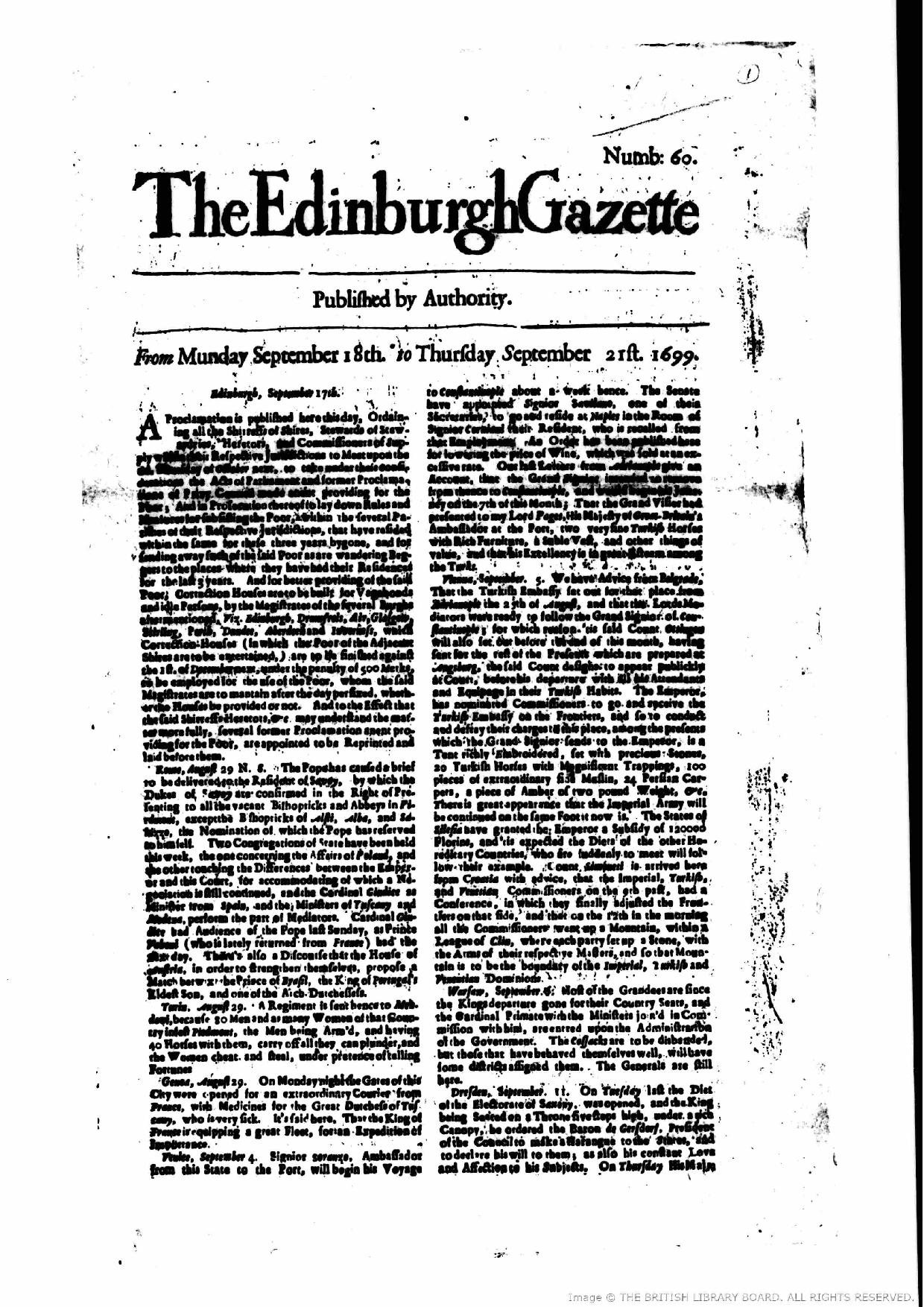 The London Gazette was government-produced, and some thirty-four years after its first appearance the Edinburgh Gazette began publication.

The early years of the Edinburgh Gazette

Published by Her Majesty’s Stationary Office eight years before the act of Union, its content consists of legal and official announcements from HM Government, the Scottish Executive, the Parliaments at Westminster and Holyrood, the Armed Forces, local authorities, churches, companies and private citizens.

It featured articles relating to state matters, parliamentary affairs, planning, and even transport, with Local Authority notices relating to road and footpath closures. It also regularly printed notices of bankruptcies, the appointment of liquidators or meetings of creditors.

Publication of the Edinburgh Gazette began on 2 March 1699 by James Watson the younger. Watson, a Scottish printer, bookseller of note and founder of several Scottish newspapers, came from a long line of Scottish printers. Unafraid of controversy, his printing often found him court and he was imprisoned at least once.

Watson printed 41 issues, the last on 17 July 1699, until a dispute with its editor, Captain Donaldson, forced him out. Donaldson said afterwards that Watson "found it in his interest to disengage himself", perhaps alluding to his imprisonment in the preceding June for printing false news on the wool export and reporting the riotous behaviour of some textile workers in the Edinburgh Gazette. The publication was then transferred to John Reid.

At first the Gazette was published twice weekly, but appeared sporadically after the year 1699, with its final issue appearing in 1793.

The life and death of a duke

The 4th duke of Hamilton, James, was an important Scottish peer, who served King Charles II as his gentleman of the bedchamber, and was instrumental in the events leading up to the 1707 Act of Union. In 1699, he married his second wife, heiress Elizabeth Gerard, and the Edinburgh Gazette gives a wonderful account of their return to Scotland, as they processed back across the border:

Their Graces were met and Complemented at the Border by about 400 Noblemen and Gentlemen, and by the Nobility and Gentry of every place as they came along the Road hither from Berwick, and arrived here [Edinburgh] on Monday last in the Evening; Accompanied with a vast many Noblemen and Gentlemen on Horse-back, besides a Train of Coaches; And for more than a Mile the way was crowded on both sides with a great number of Spectators who welcomed their Graces Arrival; and were wonderfully pleased with the Courteous and Charitable Behaviour of the Dutchess.

This account reads like something out of a medieval pageant – or indeed a royal wedding from modern times – the streets of Edinburgh lined with spectators curious to see the nobleman with his new bride. 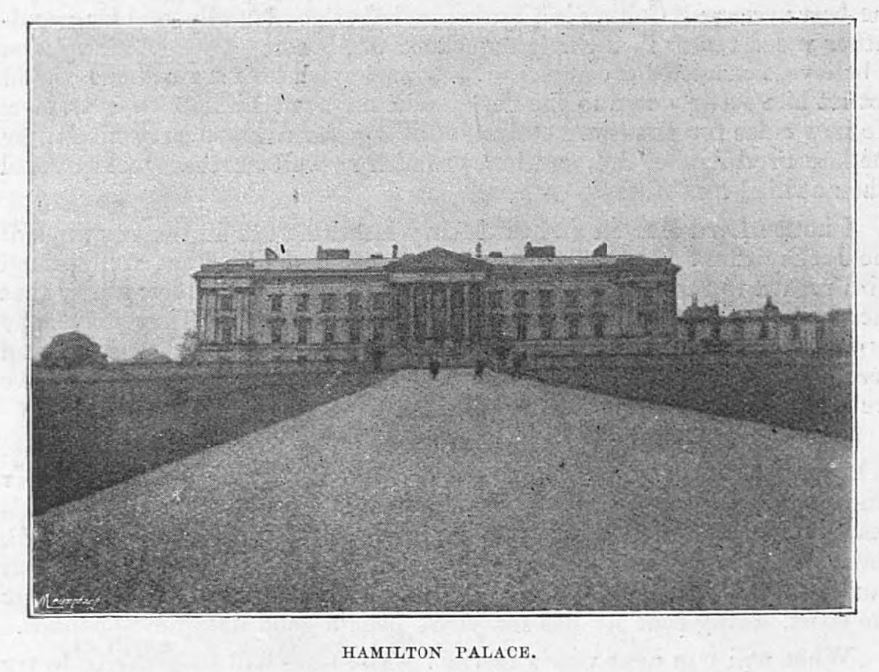 Hamilton Palace, seat of the Duke of Hamilton | The Sketch | 14 November 1894

But this particular story was not to have a happy ending; the 4th duke of Hamilton’s main claim to fame being his death at the age of 54, on 15 November 1712. For James, duke of Hamilton, was killed in a duel at Hyde Park. His opponent, Charles, lord Mohun, was also mortally wounded, as the two men faced off over the inheritance of the earl of Macclesfield, which the duke of Hamilton was claiming on the behalf of his wife, Elizabeth Gerard. 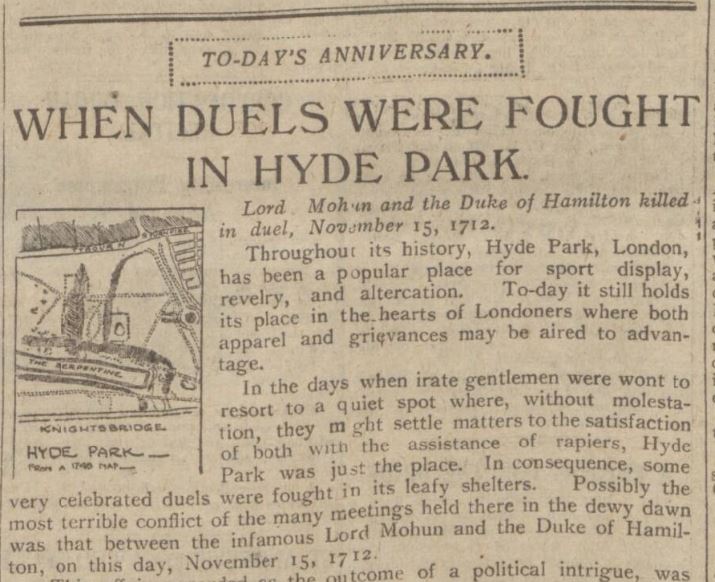 Newspapers at the time were filled with news of this tragic scandal. The Dublin Intelligence from the 13 December 1712 describes the aftermath of the Duke’s death:

Whereas by an Inquisition taken the 17th Day of November last, upon view of the Dead Body of James Duke of Hamilton and Brandon, it was found that George Macartney, Esq, was aiding and assisting the Lord Mohun to commit the Murder of the said Duke.

A reward went up for George Macartney, Lord Mohun’s cousin and second, who had allegedly killed the duke whilst apparently tending to Lord Mohun. He fled to the continent, a reward of 500l was offered for his capture, but he was eventually pardoned of any crime.

The Edinburgh Gazette is available to explore at the British Newspaper Archive website, via a paid subscription. A free trial is available for new users.

Would you like more history, direct to your inbox? Sign up today for the FREE History Scotland newsletter, packed full of family history, history, archaeology and heritage.