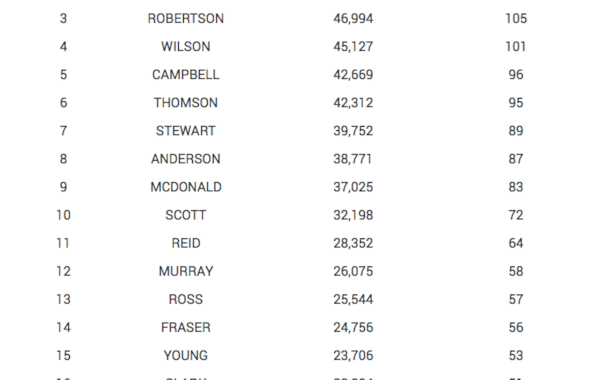 The most popular surnames in Scotland compared - 1901 and 2001 Images

The top 20 surnames in Scotland in recent years (1999-2001) are shown in Table 1 (right). Smith is the most common surname followed by Brown, Wilson, Campbell and Stewart. Smith accounts for 1.3 percent of the sample; the top 10 names account for 7.9 percent and the top 20 account for 12.4 per cent.

In 1901, once again Smith and Brown are in the top two places. Note that McDonald is shown as more common than MacDonald in 1901, although given the uncertainties surrounding the spelling of these names it would seem wrong to regard this as significant.

In view of the widespread interest in ancestry and genealogy, Scottish surnames have been extensively researched and many books and articles have been written on the subject. Clans and their history have received particular attention.

However, the use of surnames to indicate family relationships as in modern times has not always been the case. Surnames in the past have been based on many factors such as:

In many cases similar, or in some cases identical, surnames have been derived from entirely different sources and different areas of Scotland. Thus the modern 'consistency' in naming conventions has been based on a possibly 'inconsistent' starting point. In other words, to rely on surnames as a guide to family history becomes less reliable the further back in time the researcher goes.

The compulsory registration of births deaths and marriages started in Scotland in 1855 and registrars started to insist that individuals should use the same surname as their father. The first surname survey, covering registrations during the years 1855, 1856 and 1858, was published by the Registrar General in 1860.

The first people in Scotland to acquire fixed surnames were the nobles and landowners who called themselves, or were called by others, after the land they owned. This was then taken up by others who used the region or district from which their family originated. Examples of this are Johnstone, Leith and Calder.

Throughout Scotland, there were many places with the same, or similar names, and hence 'families' with the same (or similar) names emerged. This was further taken up in towns, where families sometimes even used street names as surnames. Thus in many cases, both proprietors and tenants used the same names.