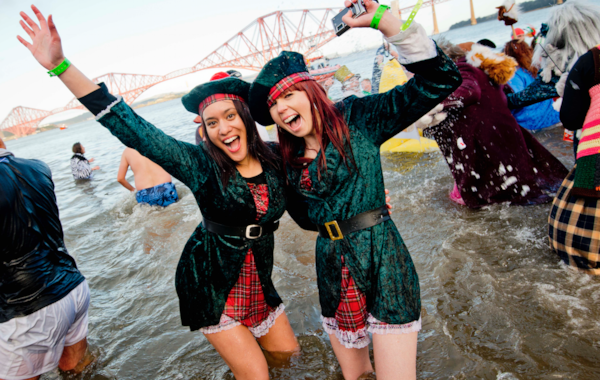 ‘It’s like nothing else you’ll ever do,’ says Loony Dook organiser David Steel, before going through his Loony Dook checklist.

Extremes of temperature…
shock to the system…
the cold when coming out.

It all sounds a bit too, well, horrible, really, so what inspires people to take part?

David Steel: It’s something different to do, crazy and also a bit unique considering the backdrop of the two famous bridges. Then there’s the appeal of raising money for good causes and I believe that is the aspect which has helped to make the event grow to what it is today.

Kenny Smith: I was inspired to do the loony dook as a fundraiser raising money for the Edinburgh sick kids and raised a good few hundred pound for them.

Shona Mackenzie: My friend died of cancer so we decided to do the dook in her memory & raise funds for Marie Curie while we were at it. Plus my dad's done every dook so far so it seemed like a logical thing to do at some point in my life.

What was the first dook you did like, were you ready for the cold?!

Shona Mackenzie: Well that's a tough one I knew it would be baltic, but don't think that can ever prepare you for how cold it's actually going to be. Granted hanging about waiting on the parade does help to cool you down but hitting that water is something else… so much so that if there's a massive queue to get up the stairs like there was on my first dook I was tempted to go back in for some heat!! Has the dook become more popular over the years?

Shona Mackenzie: Definitely, there's not many I have missed, granted I don't remember them all, I was only a baby when they started but back in those days there'd maybe be a few family members or locals watching, now you have people turning up hours before to get the best view! The ferry is jam packed! Thankfully it's managed a lot better now, so the dookers can get in and out of the water without being too delayed.

David Steel: On that first day, if memory serves me correctly, there were about eight or ten who took part and a small group of spectators.

A couple of local residents watching from their window assumed some sort of charity was involved and handed over some money and we decided there was potential in this to raise money for charity through sponsorship. Over the years hundreds of thousands of pounds must have been raised for many, many charities and good causes.

Kenny Smith: I would definitely say that it's got busier over the years. Its also a great way to shake off a hangover on New Years Day or just doing a good deed at the turn of the new year. What tips would you give to first-time dookers?

Shona Mackenzie: Don't do it!! Only joking, it's an experience I'll give you that! I find having a drink helps… not too much though… maybe a wee top up from the night before and a wee malt before you go in, whilst you're in and when you come out. Make sure you have a warm set of clothes to change into, get changed and into the heat asap, if not you'll still feel baltic come 10pm that night.

David Steel: Be aware of the extremes of temperature and the shock to the system when first immersing oneself in the water, but also the cold when coming out. Also be very aware that there are hundreds of people in close contact, many of them just a wee bit boisterous so you do have to be careful.  Most important, enjoy the occasion, it’s like nothing else you’ll ever do.