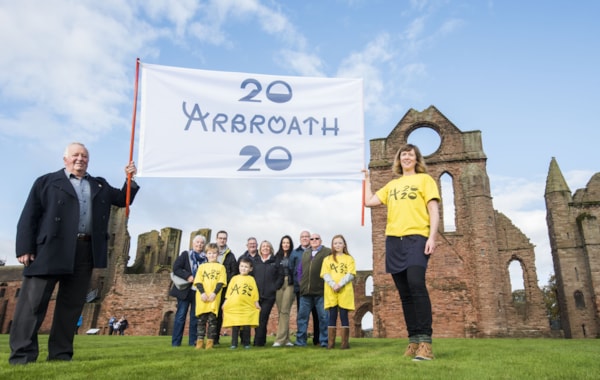 On 17 October, at the mighty entrance gates to Arbroath Abbey, Arbroath 2020 announced a programme of events to celebrate next year’s 700th anniversary of the Declaration of Arbroath.

Widely acknowledged as one of Scotland’s most important documents, the Declaration of Arbroath was sent from Arbroath Abbey in Angus to Pope John in Avignon on April 6, 1320. The letter, with the seals of Scotland’s nobles attached, emphasised Scotland’s right to be a nation, while also stressing that the country’s king had to follow the will of the people, sowing the seeds of modern democracy.
Arbroath 700 events
The celebrations begin on April 4 with a festival weekend featuring several key Arbroath 2020 events. On the evening of Saturday, April 4, 300 singers’ voices will resound around Arbroath Abbey for the world premiere of ‘Of Light Breaking’, a specially commissioned choral work by Paul Mealor, voted ‘The nation’s favourite composer’, and internationally-renowned poet Grahame Davies.
On Sunday, April 5, over 500 people will mark the 700th anniversary of the Declaration of Arbroath by taking part in a procession from Arbroath Abbey to Arbroath Harbour. The Arbroath 2020 Procession will evoke the spirit of Arbroath’s Declaration Pageants of the 1950s and 1960s, when hordes of cheering onlookers would line the streets as hundreds of medieval nobles, soldiers and monks made their way to the Abbey for the re-enactment of the 1320 signing of the Declaration of Arbroath.
'A pageant for our time'
Pippa Martin, Angus Place Partnership Creative Producer spoke about her hopes for the event: “People who witnessed this spectacle speak of how the hairs on their necks stood on end as the procession, with King Robert The Bruce leading the way, came along the High Street.
“We hope the procession on April 5 will evoke the same enthusiasm and support. However, although the Arbroath 2020 Procession will reflect the history and heritage of the Declaration, it will be a pageant for our time. We want it to bring people and communities together, to excite and involve everyone in Arbroath, especially young people.
“The Arbroath 2020 Procession will end at Arbroath Harbour where there will be a ceremonial reading of the Declaration by voices from all generations before a replica of this priceless document is handed into the safekeeping of a local skipper and sailed out to sea, as happened 700 years ago.”
QUICK LINK: Did your ancestor sign the Declaration of Arbroath?