Can you help reunite wartime photographs with their families? A photograph album belonging to a kind-hearted US family who welcomed 150 British and Commonwealth servicemen into their home is at the heart of a quest to reunite precious images with their families around the world.

During World War II, the Casey family of New York welcomed Allied servicemen of the Royal Navy, RNVR, Merchant Navy, Fleet Air Arm and RAF into their home, providing a warm welcome for men often stationed thousands of miles from their homes and families. The Caseys kept a photograph album containing an image and notes relating to each man they welcomed, and in many cases, kept in touch with the servicemen for years after the war.

Eleanor and Fraser Casey were a US Naval family living in Douglaton, New York in the 1940s. Fraser was a US Naval Architect and was most probably involved in the Lend Lease ships and also US Navy shipping. He had joined the British Union Jack Club and from 1941, after Churchill and Roosevelt had agreed the Lend Lease agreement, he started to invite servicemen to his home.

These men were on convoy duty, bringing vital supplies to the UK, crossing the UBOAT-infested Atlantic. They were also crewing the Lend Lease ships back to Scotland and other naval ports. These men were under extreme pressure and some already had been torpedoed when they arrived at the Casey’s home. Eleanor kept a note and photograph of each man who visited. Also wrote to families and sent food and clothing parcels to those with young children.

The men came from all areas of the UK, New Zealand, Canada, the Isle of Man and the Channel Islands and you can see a list of their names on the project website.

The project was initially taken on by Barry Holden whose father was one of these sailors. He was from East Lothian and Barry found a card from the Casey's and contacted a Historical Society in New York. Patsy Casey Cox sent the albums to Barry. Unfortunately health issues has meant Barry has had to stop working on the project. In September 2020 the project was taken over by Gloria Winfield a Military Historical Researcher and Nicola Girling. 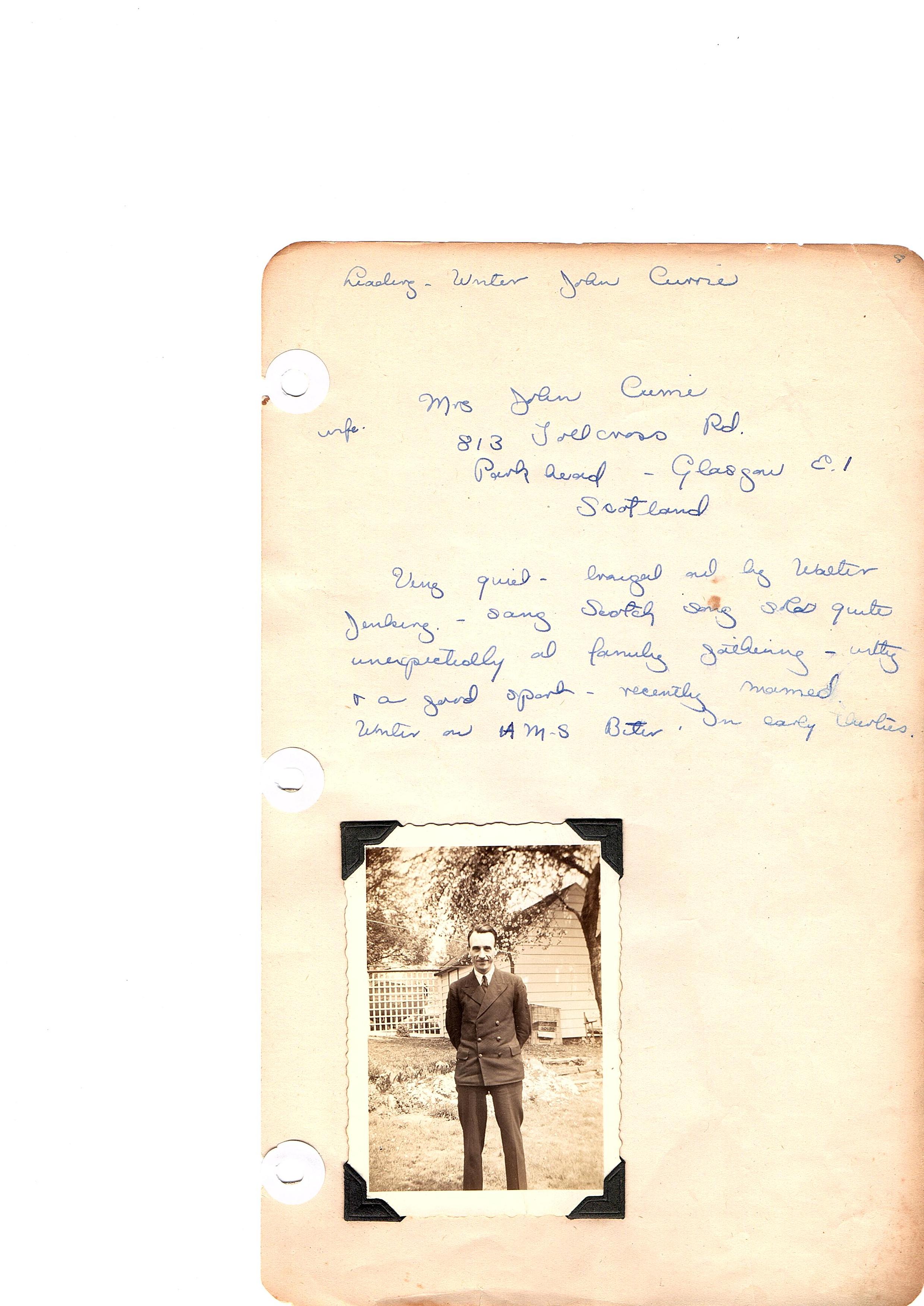 Notes for John Currie of Glasgow

Over the past few years, genealogists Nicola and Gloria have taken on the challenge of getting the photographs back to their families, some of whom might never have seen a photo of their military ancestor. The search so far has involved people in Norway, France, New Zealand, India, Australia, Canada and the UK and so far over 80 of the men or their families have been found from all over the world.

There are still 6 missing Scottish servicemen to find. If anyone has information on any of these men please e-mail.  To find out the names of all 150 servicemen go to the website and click on the Casey Project.