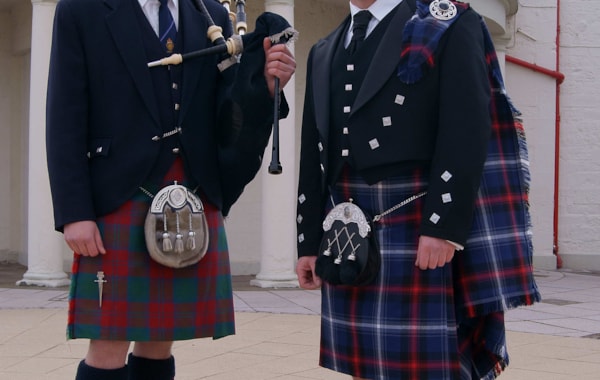 Tartan designer Steven Patrick Sims spoke to History Scotland about designing the Bell Rock Lighthouse tartan, which has also been adopted as the official tartan of the Northern Lighthouse Board. ...

Tartan designer Steven Patrick Sims spoke to History Scotland about designing the Bell Rock Lighthouse tartan, which has also been adopted as the official tartan of the Northern Lighthouse Board.

How much did you know about the Bell Rock Lighthouse before starting this project?

I’ve lived in Arbroath all my life and the lighthouse has always been there as long as I can remember, flashing on the horizon like a beacon at sea. I’d been to visit it by boat prior to doing the tartan. I’m also an artist and had been previously commissioned to paint the lighthouse, so I had a previous knowledge.


What was your starting point for designing this particular tartan?


This was actually the very first tartan that I designed. I have design experience and have been an artist but it was when the bi-centennial of the lighthouse was celebrated two years ago that I started to develop an interested in tartan.
I’ve become fascinated by the diversity of tartan – you can start with as little as two colours, and as many as six, and make an amazing design. I researched clan tartans to start with and then started I could design my own tartans. I looked into how tartans were produced historically (when people painted the designs) through to more modern methods, using software.

And I’m not just using these colours randomally; a lot of depth and thought goes into it behind the scenes. What I think I’ve done is created something unique. I’ve created an image of the lighthouse in the tartan. It’s designed like a flash of light and there are ninety threads which represent the ninety blocks that make up the tartan. There’s also a red and white light, as this was the distinctive red and white flashing lights that the lighthouse had in bygone days.

Because the lighthouse has a history tinged with sadness, did this affect your design work?

It did absolutely. There's black in the tartan as well I see that as serving a few purposes. The lighthouse is a light in the darkness; black marries with blue for the North Sea; and black is a tribute colour and a tribute to the thousands of lives lost.

Is there another tartan that you’d really like to design?

I do have a tartan that I’m working on, and quite a few projects in the pipeline, but in the future I’d like to do a tartan for the Ryder Cup. I’m very proud that the Bell Rock tartan has been chosen as the official tartan of the Northern Lighthouse Board. The Bell Rock Lighthouse and those who worked there deserved to be recognised, and it was a natural progression for me to do this.

To find out more about Steven’s work, visit his website The Tartan Artisan.