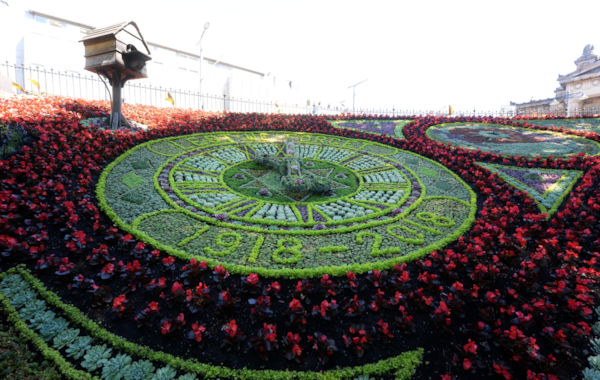 As Edinburgh’s 2018 Floral Clock is unveiled, we take a look at fascinating facts about this landmark feature in Edinburgh’s cityscape.

As Edinburgh’s 2018 Floral Clock is unveiled, we take a look at fascinating facts about this landmark feature in Edinburgh’s cityscape.

1. The Floral Clock was first created in 1903 by the Edinburgh Parks Superintendent, John McHattie, and is believed to be the oldest floral clock in the world.

2. Until 1972 the clock was operated mechanically, and had to be wound daily.

3. It takes two gardeners more than a month to plant the flowers and plants used to create the clock, which usually stays in bloom until October.

6. The clock began to celebrate a different anniversary of event each year from 1946 onwards.

7. The Edinburgh Floral Clock is 36 feet in circumference.

8. The clock’s large hand weighs 80lbs (more than the weight of a bale of hay!).

MORE: Edinburgh Then and Now