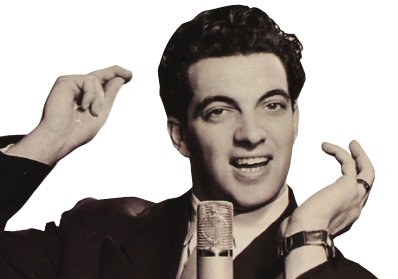 During the late 1960s, popular singer Frankie Vaughan heard about the gang violence in the Glasgow suburb of Easterhouse and travelled to the area to see how he could help. We spoke to Frankie Vaughan’s son David Sye, about his father's work in Glasgow… ...

During the late 1960s, popular singer Frankie Vaughan heard about the gang violence in the Glasgow suburb of Easterhouse and travelled to the area to see how he could help. Over the years he returned to the area many times and helped establish the Easterhouse Project.

We spoke to Frankie Vaughan’s son David Sye, who was certainly influenced by his late father’s altruistic outlook on life.

The successful yoga teacher travels around the world teaching his craft, but also finds time to work on a number of projects looking to improve the lives of others.

‘My dad grew up in Liverpool,’ David explains, ‘and always felt it was a similar port to Glasgow, a real melting pot. He was a bad boy and he got into street gangs, but the boys’ club helped him have some sort of structure.

‘When he found out that there were similar gangs in Glasgow, and that it was out of hand with the authorities unable to do anything about it, he took it upon himself to action the movement. He made a promise and he kept his word.’

Frankie’s visits to Easterhouse gradually influenced many young people, not least David, who often accompanied his father to Glasgow.

‘He went in there and I think people were ready to slaughter him,’ David recalls, ‘but when he opened his mouth they liked him very much. He was very humble, he wasn’t like a politician who wanted the kudos. He definitely involved me in the project, he always thought “you appreciate that there are people less fortunate than yourself, and you try to do something in this world”. That’s why I work with Palestinians and Israelis now, and with kids in Glasgow, so that’s how I’ve carried on his work.’

David has visited Easterhouse many times since his father passed away and, while disappointed to see the influence of the Easterhouse Project fade away, he is working hard to bring new initiatives to the area.

‘Our new project takes kids from places like Govan, Easterhouse and the Gorbals, and takes them out to Skye, where we’ve been working with them.’ But the work is never done. ‘People need to be more aware… ‘ David reflects, ‘we’re all responsible.’

As he continues to help other people in his own way, David is following in his father’s footsteps, and no doubt Frankie would be very proud.

‘My pops is not around anymore,’ David says, ‘but my pay-off is I see these kids change and I see them become happy. I make good money teaching yoga around the world, I don’t make any money from doing this, so the pay-off is you make someone else happy.

‘I’ve always felt, you can guarantee your own happiness by making someone else happy, and that was told to me by my dad, and he was right. I hope that people will acknowledge what he’s done, because he was a great soul and he didn’t ask for any kudos. It would be nice if people recognised what he started. Lots of people have done work there, but he kicked it all off.’