Things to do in Loch Ness The Caledonian Canal at Fort Augustus

Loch Ness is an iconic place to visit on your Scottish adventure and a perfect base for exploring the surrounding area. Here are Highland Titles' top recommendations for things to do: from the tourist hotspots to the hidden gems. Let’s go!

Drumnadrochit – This charming village is a town-sized tribute to Nessie, the iconic monster lurking in the depths of Loch Ness. Go on your very own monster hunt at Nessieland, and explore the history and mysteries of the area at the Loch Ness Centre and Exhibition. Drumnadrochit also hosts its own annual Highland Games in August, where you can experience traditional Gaelic sporting events, such as hammer throwing, tossing the caber, and shinty. And if you’re still not convinced – the Groundskeeper Wullie from the Simpsons is said to be from Drumnadrochit!

Fort Augustus – A historic and scenic settlement with spectacular views of Loch Ness. The centrepiece of the village is the Caledonian Canal. This amazing feat of engineering has a series of locks and bridges which run right through the Great Glen, allowing boats to travel safely from coast to coast. If you follow the canal to the banks of Loch Ness, the view of this western tip is hard to beat, and the official Loch Ness sign is a popular prop for holiday photos. We recommend visiting Fort Augustus in the mornings to beat the crowds as by lunchtime, this wee village will be buzzing with tour buses and visitors.

Beauly – Said to be named by Mary Queen of Scots during her visit in 1564 after exclaiming ‘C’est un beau lieu’ (what a beautiful place). This stunning town is home to award-winning independent shops and cafés like the deli Corner on the Square and the excellent wee bakery Café Biagotti. The magnificent ruins of the Beauly Priory were chosen as a film location for Outlander Season 3, and this is also where you can find the oldest elm tree in Europe. In the summers, pipe bands often perform in Beauly’s town square, which will make your visit truly unforgettable.

Urquhart Castle – Its dramatic ruins offer a taste of the castle’s rich history, spanning over 1,000 years. Located on a strategic route through the Scottish Highlands, the castle set the stage for the miracles performed by St Columba, vicious grapples for power, and inspired acts of defiance and chivalry. Enjoy the breathtaking views from the Grant Tower and explore the foundations of medieval life. 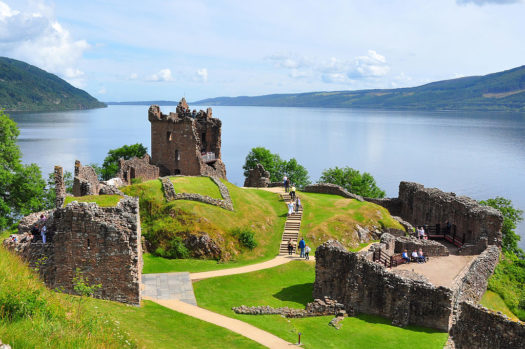 Culloden Battlefield – The harrowing site of the last battle fought on British soil and one of the most significant events in Scottish history. Learn all about the Jacobite Uprisings, Bonnie Prince Charlie, the Battle of Culloden and the aftermath, in the modern visitor centre, before taking an audio guide outside to explore the battlefield and various memorials.

Clava Cairns – Located only a short drive from the Culloden Battlefield, you can explore the mysterious remains of an ancient cemetery, dating back over 4,000 years. The well-preserved passage graves from the Bronze Age are made up of ring cairns, kerb cairns, and standing stones, which sit serenely in the beautiful woodlands. Interestingly, the cemetery was used in two periods, a thousand years apart. The cairns are free to visit and open all year round.

Boleskine Burial Ground – This historic cemetery is the final resting place for Clan Fraser, and includes a memorial stone to Simon Fraser, 11th Lord Lovat, who is referred to in the Outlander series as Jamie Fraser’s grandfather. He was the last man to be beheaded in the UK, after being charged with treason in 1747 for his role in the Jacobite uprisings.

Brought to you by Highland Titles

Highland Titles’ mission is to conserve Scotland, one square foot at a time™. By selling souvenir plots of land, they are funding their Nature Reserves and conservation projects. Join them and become a Lord, Lady or Laird* of Glencoe!

* You obtain a personal right to a souvenir plot of land. This is a form of heritable property that you can pass on to future generations. Highland Titles remains as the registered landowner and manages the land on your behalf.