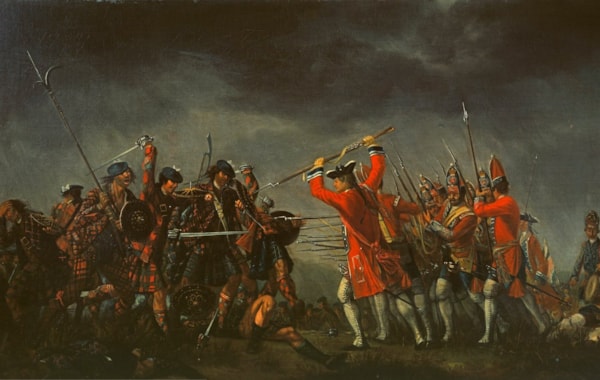 Acclaimed military historian Dr Christopher Duffy explains why now is the time to take a fresh look at the events surrounding the '45 Rising. ...

These are exciting times for ‘Jacobite Studies.’ The NTS Visitor Centre at Culloden is enjoying unprecedented success, and introducing more and more of the public to the story of the ’45. At the same time, a new generation of historians is coming forward, the likes of Victoria Henham and Darren Lane. Things have therefore moved on since I first turned to the theme of that most celebrated of the risings ('The ’45', Orion 2003), but now a tolerant publisher has enabled me not only to take due stock of the newest perspectives, but to present the outcome of twelve years of additional archival research. In the process I have looked at all the material afresh, and not hesitated to reject or re-fashion a great deal of what I and the other historians have hitherto put before our readers.

I will just enlarge on one aspect of the story, the repressions that followed the battle of Culloden. The Duke of Cumberland was not a man for half measures. He was convinced that the Jacobites had repaid the government with treachery for the ‘undeserved mercy’ shown to them after the rising of 1715, and so ‘nobody can be so weak as to imagine that what has been, can’t be again, and we may be sure this will happen, if proper and effectual measures are not taken to prevent it.’

The punitive expeditions by land and sea lasted well into the late summer of 1746, and if (for the sake of argument) we set the Jacobite accounts to one side, the testimony of many supporters of the government can leave no doubt that the ‘effectual measures’ were truly atrocious.

The process of trial, deportation and execution went on for much longer.

Even by the standards of the 18th century, which could be pretty robust, the moral case for repression of that kind was difficult to sustain. We still have to ask whether the severities were indeed ‘effectual,’ and the answer, surprisingly enough, is that they were not. The barbarities were locally devastating, and appalled the fair-minded Whigs, but from the practical point of view they had not gone nearly far enough (stopping well short of ‘genocide’).

Many Jacobites in both the Highlands and Lowlands refused to accept that the defeat at Culloden meant the end of their fight, and well beyond notorious Lochaber government agents were reporting that traditional areas of Jacobite support were seething with a spirit of rebellion. Likewise Cumberland’s successors (the generals Albemarle and Bland) and the well-informed Earl of Findlater give copious evidence of campaigns of Jacobite intimidation. The overt Jacobite violence culminated in the celebrated Appin Murder (14 May 1752). The deed itself was nothing out of the ordinary, but as involving an appointee of the government it was taken as a direct challenge to the authority of the regime.

The Duke of Newcastle as prime minister had to keep King George in distant Hanover up to date with the investigations. There was a further dimension. The numbers of men with Jacobite sympathies far exceeded those who had actually ‘come out’ for Prince Charles (pictured right), and the covert Jacobites lurked undisturbed in legal circles in Edinburgh, the magistracy, the local councils and among the revenue officers of the Crown.

The Duke of Newcastle had been striving for years to root out the hidden Jacobites in the public service, but he now discovered that they were just the people who had poisoned him against the victim, Colin Campbell of Glenure, and his half-brother Barcaldine. He had been about to dismiss the two of them from their posts on the confiscated estates, and now he discovered that Glenure had paid for his loyalty with his life. Newcastle gave up his attempts to purge the bureaucracy as hopeless.

The Jacobites were benefiting directly or indirectly from what General Bland described the ‘Scottish interest’ that pervaded every level of public life.

His predecessor the Earl of Albemarle had complained that the loyalties of the men of influence in Scotland were basically Jacobite, which is going a bit too far, but he and his kind were undoubtedly baffled by a closing of the Scottish ranks, an instinct that transcended religion and political allegiance. Thus the eminent Reverend William Wishart, as Principal of the Presbytery of Edinburgh, informed the Duke of Cumberland that the discovery of Jacobites was the business of the officers of the law and not the clergy. The exasperated Cumberland replied that Wishart ought to have been pleased to ‘put his sickle into so far a harvest.’

Likewise in northern Atholl, the ministers refused outright to join in any witch hunt of the kind, and in Blair Atholl itself the governor Lieutenant-Colonel Sir Andrew Agnew, fierce old Whig though he was, connived with the Duke of Atholl to spare the houses of the local Jacobite gentry, which was again contrary to Cumberland’s orders.

In Scotland generally there was no shortage of obliging Whigs who testified that their Jacobite neighbours had entered into rebellion only under duress, or through being ‘flustered’ or otherwise in no state to make a rational decision. When the Jacobites had been in power they had behaved with ‘great humanity’ (a phrase that comes up again again), and now they repented of their disobedience. Exactly the same process had been in train after the ’15, and – who knows? – it might have been prevalent in the 1690s.

Altogether the Jacobite resistance after Culloden proved to be ingenious, varied and in some respects strikingly successful. Over the longer germ the more militant forms of Jacobitism were unable to survive the cumulative impact of the loss of its most prominent leaders in the rising itself, the peace with France (1748), the repressive or transforming legislation that was enacted between 1746 and 1752, and changing perceptions of advantage on the part of the great landowners.

The consequences for the Highlands do not have to be spelt out. It might have been worse. The Whigs, as fellow-Scots, extended a remarkably degree or protection or tolerance towards their Jacobite neighbours. The Jacobites, if never completely reconciled to the fact of defeat, did not evolve into a permanently embittered element in Scottish society.

Dr Christopher Duffy is the author of Fight for a Throne: The Jacobite '45 Reconsidered, published by Helion & Company. The bid of Bonnie Prince Charlie and his Jacobites for the throne of Britain has never lost its grip on the popular imagination. In July 1745 he and a tiny group of companions arrived in Scotland. They came unannounced and unsupported, and yet within less than five months Charles was able to lead an army to within marching distance of London and make King George II fear for this throne. Afterwards the Highland Army continued to out-fight the redcoats in every encounter, except its very last. These were not the achievements of a backward-looking cause, and this 'ground-breaking study' is the first to explain exactly why.