Be inspired by these great outings chosen by author and hillwalker Ronald Turnbull, which make most of the unforgettable scenery of Loch Lomond and the Trossachs.

Be inspired by these great outings chosen by author and hillwalker Ronald Turnbull, which make most of the unforgettable scenery of Loch Lomond and the Trossachs.

Travel up into the Highlands from the south and Loch Lomond and the Trossachs National Park is the first place you come to. There's a reason the Mountain Gods laid it out like that. Because Lomond-Trossach is the very best place to start your lifetime's exploration of Scotland's mountains, lochs and glens.

Here is everything you want, but on a slightly smaller scale. Grand mountains, but without the full-on fearsomeness of Glen Coe or the Cairngorms. Wilderness, yes – but at the end of a day's walking, a village with two pubs and a teashop. Long rambles beside the loch – but instead of the proper Scottish sort of peat-hag swampy shoreline, you can stroll a shady path below the oak trees.

And so, Loch Lomond and the Trossachs, first in terms of geography at the start of your Scottish mountain lifetime, is also first in the affections of many walkers and mountaineers. Here are five quite different ways of having a high old time here.

1. Ben Lomond in the snow

Ben Lomond is possibly Scotland's most popular hill, walked up by about 30,000 people every year. There are good reasons for this. Ben Lomond is easy to get to – just an hour off the motorway at the edge of Glasgow. It's easy to get up – a wide and popular path all the way. And its moderate amount of effort is well rewarded all the way up with great views along Loch Lomond, and a narrowing ridgeline to add excitement along the final few steps, before the great view of half the southern Highlands.

So why do it in the snow? Because that easy access means you can get there right at the day's beginning, in time to see the sunrise coating the snowy tops with custard colour. Because the simple one-hill outing combined with that early start means you won't have to worry too much about getting down again before it gets dark at teatime. And because the snow-go area makes it a no-go area for 99% of those hordes of summer visitors.

And because winter conditions make it all about six times as wonderful.

Even the car park is pretty, with Loch Lomond lapping against its edge. The winter trees are bare against the brightening sky, until you emerge to that Loch Lomond view. A view that just gets longer and larger with every step, to show the Lowlands lingering under the morning mist and the sunlight licking the Toblerone shapes of the Arrochar Alps across the water. 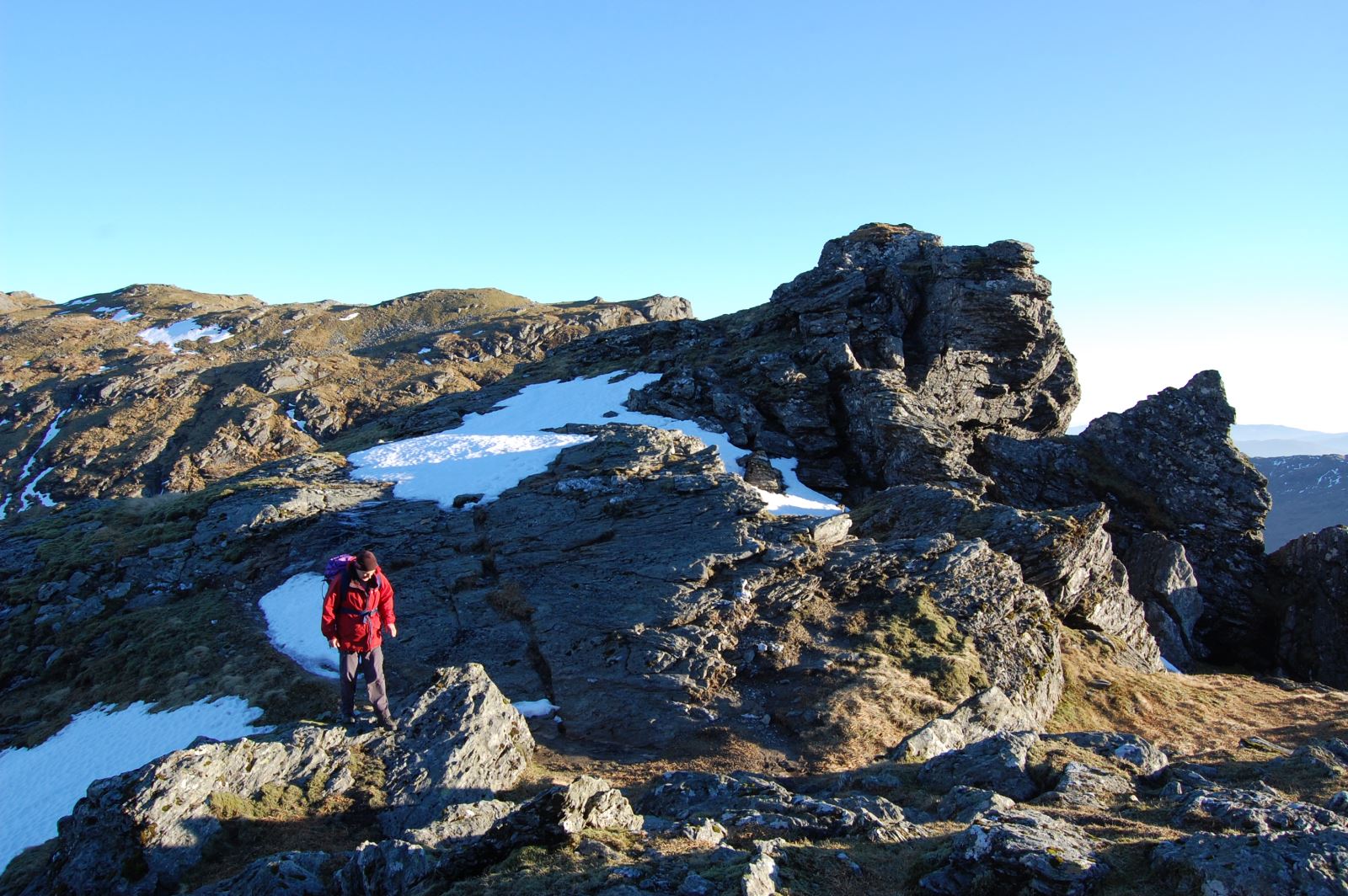 The classic Munro outing bags a handful of them, linked by high hill ridges. Because it's classic, there's going to be a big path to follow and several other baggers to chat with about what the weather's like. But being as this is Lomond-Trossach, your bagging day does have a few quirky bits.

The steepish grassy slope onto Twistin Hill is standard stuff. If you want to walk high then you do have to go uphill; this is something you'll get used to over the 278 more Munros to come. Twistin Hill, once you're up, is a steep-sided grassy ridgeline, with a little path along the top and big views in various directions: just what Munro bagging is all about.

But then the ridgeline goes all Lomond-Trossach on you, with a rocky little chasm to step down into, and knobby bits to wind around or scramble up and down. Then, after An Caisteal and down into the saddle behind, there's a crag in your way. The path slants up to right of it, teeters along a really rather steep hill slope, then wiggles its way up by hidden terraces onto Beinn a' Chroin. And Beinn a' Chroin is the knobby bits without the ridgeline under: a high-level plateau that's one of the best places in southern Scotland for getting a bit lost in.

A ridgeline leads down again to the head of the Kinglass River, and you could plod out along a swamp that, thankfully, soon transforms into a hydro-scheme track. But if you also want the two more Munros dead ahead, then it's time for something that's no longer standard bagger. Because there isn't a linking ridgeline. And there isn't a path.

And it's time to exercise your in-brain face-recognition software – where the face to be recognised is the huge southern slope of Cruach Ardrain.

Study the contour lines on the map; study the hill ahead. There is a way. Round on the left, a little spur beside a stream is called Teanga, the tongue. It leads onto a clump of sub-summits half way up the hill. A place to linger, far from the trodden paths, and enjoy the views into two separate glens while wondering about the way onwards.

Then cross the clump, skirting to right of the really rocky one called Stob Glas, to find a grassy hollow leading down right into a quiet corrie (Coire Earb on the map, but not the other Coire Earb just back to the west that's the head of River Falloch). Work around the corrie's back, below black slimy bits of crag, and slant up onto the ridgeline of Beinn Tulaichean. The baggers up there are surprised to see you arrive from such an off-ridge direction.

From here on over, there's nothing to look forward to but some ordinary bagging. Ordinary bagging just means the nice clear ridge path, and the airy slender shoulders of Cruach Ardrain. That hill's huge-view summit cairn, and the slanty path down its steep north-western end. The rambly 2km of ridgeline along to Grey Height.

Supposing you already did Ben Lomond: then you've got just 277 more hills-worth of this sort of Munro fun ahead of you.

Having a high old time doesn't have to involve the 900m contour. If there's one thing we know about Loch Lomond, it's got some bonnie banks. Those banks are covered in ancient oakwood, and the twisty little path of the West Highland Way winds up and down around the trees in a way that's a bit disconcerting to West Highland Way walkers with big packs on their backs and 70 miles still to go to Fort William.

But get there the easy way, by floating across on a boat. The Cruise Loch Lomond waterbus timetable drops you off at Inversnaid in the morning. Here the 'wildness and wet' waterfall poeticised by Gerard Manley Hopkins crashes down into the edge of the loch, at the same time as the steam rises gently from an early cup of coffee in the sofa bar 50 metres to its north. The leisurely ferry timetable allows plenty of time to linger, enjoying the coffee and the waterfall.

Then 13 cracking kilometres of lochside wandering in and out among the trees, with plenty time of for a paddle at one of the little gravel beaches.

Ben Venue is the midget that thinks it's a mountain. It's got enough rock on it for any big hill, but in fact it's one of the smallest in the area. You can get up and down it in an afternoon. Which is good enough reason in itself for taking two days over it and sleeping out in one of the grassy hollows around the summit.

I was going to write about 1000 deeply moving words about the afternoon woodlands, the rocky slopes and the pink and yellow colours of the late-night hilltops. But however moving my words, moving pictures are even more so. So here is my bed-time video:

The route is from the car park at the west end of Loch Achray, through quite a lot of the delightful afternoon oakwoods. The well-built path leads up to the saddle to east of the summit for half an hour along the knobbly top. In the grey morning, after the multi-coloured night, I made my way down by the grassy hollow northwards to the corner of Loch Katrine.

5. Scrambling the three tops of the Cobbler

Someone else who's got a problem is the oldest son of the Duke of Argyll. Because before he can take his rightful place as head of Clan Campbell, he's got to stand on top of that rocky middle top. And baggers of Corbetts, the hills of 2500 feet but not as much as 3000ft, share his anxiety.

Because this tower with two holes in it, dangling above the hollows of Ben Arthur's eastern corrie, is the trickiest top to get to of any on the Scottish mainland.

The rest of us, lacking ancestral responsibilities and also any peak-bagging compulsion, can just wait for a nice dry day, and pick and choose among the rocky opportunities of what's the finest of Scotland's sub-3000ft summits.

The fun starts only half way up, where two huge rocks squat alongside the well-made path that rises out of the car parks at Arrochar. The two big stones are the Narnain Boulders. The downhill one is shaped like a plum stone. Clamber onto its uphill end, using a cunning push-hold move and also a stone on the ground below, and it's just a walk up its sloping side to your boulder-top pose for the photo. The uphill one is more problematic. The side that slopes back has only the most philosophical and vestigial of holds on it. Having intellectualised your way to its flat top, you stand and admire the view up to the three summits still quite high above. Then you walk around and wonder how the heck to get back down again…

The path heads on uphill – and so do you, once you've nerved yourself to the short dangle-and-drop off the Narnain boulder. It's best to follow the path right up to the col at its top, where it doubles back left up the hill’s north-eastern spur.

The first summit you come to is the last – the fearsome overhang of the sticky-out thing he mends your shoes on. It's only once you've strolled up the slopey slab, stood on top and strolled back down again that you realise just how much empty air you've been standing directly on top of.

Next up is the true summit. It looks hard climbing, and also scary. It isn't as hard as it looks but it is every bit as scary. The route takes you left to right through the first of the holes, onto a ledge overlooking a long drop into the corrie below. The ledge is wide and leads along to a sloping ramp, a hollow below the second little hole and a clamber over the two detached rocks onto the flat summit.

It's only when you come to return down the ramp that you realise that while that ledge is quite wide, it isn't quite wide enough – not if it comes to catching you if you slip. But the handholds on the ramp do work again in the downhill direction.

And soon you're back at the cairn on the gravel, checking your pal's camera to make sure he did get the photo of you because, no, you really don't want to go back up there for another…

MORE: Wild Scottish ruins you have to visit! 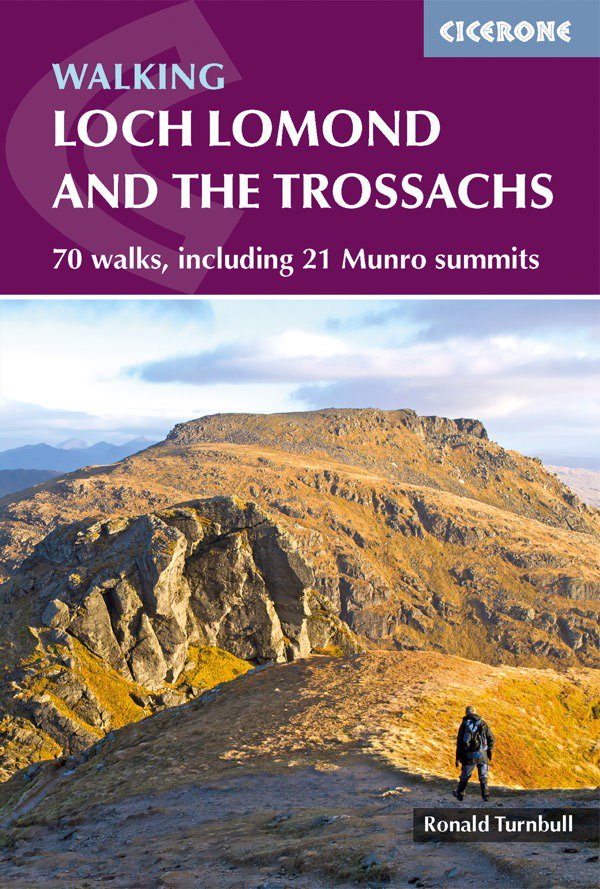 Ronald Turnbull is the author of Walking Loch Lomond & The Trossachs, published by Cicerone Press. This guide to walking and scrambling routes in the beautiful Loch Lomond and the Trossachs National Park includes more than 70 graded low-level, mid-level and mountain walks taking in hills, glens and picturesque woodland, as well as all of the region's Munro summits. Highlights include Ben Lui, Ben Lomond, the Cobbler and the Arrochar Alps.