Alistir, who is one of Scotland's leading experts on antique jewellery, has created the gemology map to demonstrate the country's rich jewellery heritage - and the spots where gems are waiting to be dug up. 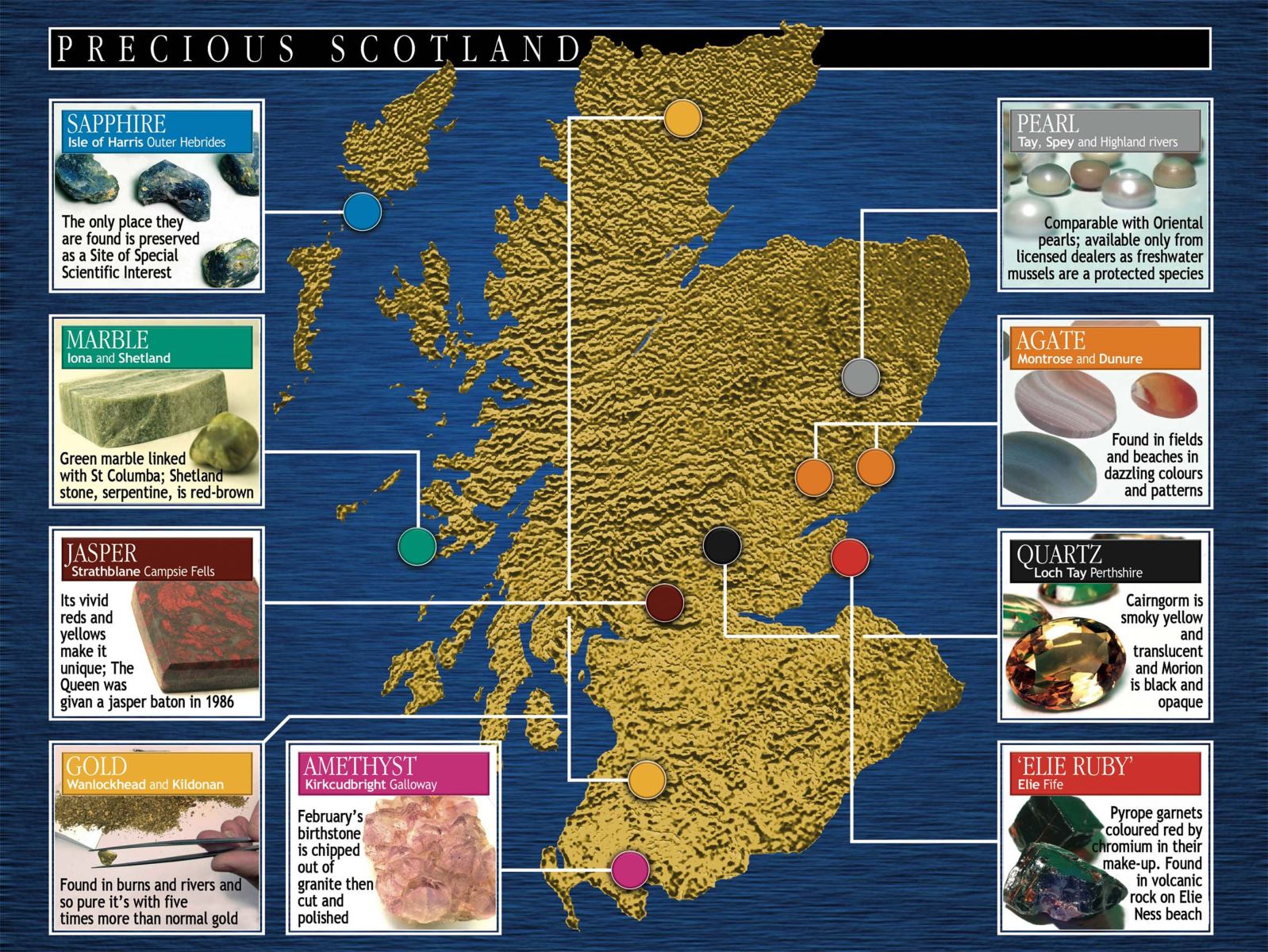 Scottish sapphires are among the rarest of all Scottish gemstones and can be found in just one location on the Isle of Harris The scarcity of the stones, and therefore their value, has increased because the area where they are found has been protected since it was designated a Site of Special Scientific Interest (SSSI) in 1990.

Agates can be found at various locations, but most notably in parts of Angus (Montrose and Monifieth) and Ayrshire (Dunure and Galston). Sometimes they can be found loose on beaches or in farmer’s fields, or they can be hammered out of rocks.

Cairngorm and Morion are ancient Celtic names for the coloured quartz found in Scotland’s mountains regions, most notably around Loch Tay, Perthshire. Cairngorm is a smoky, yellow-brown colour and similar types found in other parts of the world are known as Citrines, because of their lemon-yellow transparent colour. Morion is found in a natural, opaque, black form.

Elie Rubies are found exclusively at a beauty spot in the Kingdom of Fife which has earned the nickname, Ruby Bay.
In truth the name ruby is actually a misnomer, since these Scottish stones are actually garnets – known by the mineral name Pyrope – which have a distinctive, but unusual deep red colouring.

Scottish gold from Scotland's streams and rivers has been sought for centuries.

Iona marble from the Western Isles and Shetland Serpentine marble are much sought after for jewellery making purposes.
The pale green Iona marble was used to make the font at historic Iona Abbey, however, smaller pieces can be beautifully polished, and have also proved popular, particularly in Scottish pebble jewellery.

Alistir Wood Tait is a jeweller and gemmologist, and has been prominent in Edinburgh’s jewellery establishment for more than three decades. Alistir’s interest started as a schoolboy hobby collecting Scottish minerals, agates and gold panning.

As a teenager in 1973 Alistir was the youngest student to attain the Fellowship Diploma of the Gemmological Association of Great Britain. He set out on his professional career in the African gem trade working for Arthur Thomas Gems and returned to Edinburgh to develop his experience in retail, leading to the establishment of his own business in 1980.

The shop on Rose Street is a haven for lovers of beautiful things and the displays reflect the unique nature of the stock. Each of the staff is a specialist in their own field and brings their love and enthusiasm for gems and jewellery to customers and clients.