Glasgow University and World War One Dr Tony Pollard and Dr Jennifer Novotny explore the effect of World War One on the students and staff of the University of Glasgow.

Dr Tony Pollard and Dr Jennifer Novotny explore the effect of World War One on the students and staff of the University of Glasgow. For more on Scotland in World War One, read our website archive.

Like most communities across the UK, the University of Glasgow sacrificed a significant proportion of its membership to the Great War, with 4,506 serving and 761 losing their lives. The university also served as a recruiting ground. A recruitment drive at the university in October 1914 resulted in 14% of matriculated male students signing up (Hughes 2006). One event at the Glasgow University Union resulted in 200-300 students signing up with the Cameron Highlanders:

‘Addresses were constantly interrupted by enthusiastic shouts and cheers,’ wrote one observer, ‘and so impatient were the men to wear the Cameron tartan that they intimated their desire to enlist immediately. In fact, it was even with difficulty that they were persuaded to keep their clothes on their bodies and wait until the morrow for medical examination.’ (Historical Records of the Queen’s Own Cameron Highlanders)

We wish you godspeed

The University faced many challenges during the war years. At the outbreak of war in 1914 special arrangements were made for students who wanted to join the war effort. Some graduates were already pursuing a military career at the outbreak of war. Others, however, rushed to sign up.

Final exams and graduation were hurriedly organised to allow medical students to go off to serve. Nineteen of these students attended a special ceremony in the Senate Room, seven of them were already in military uniform. Below is an excerpt of the charge to medical graduates by the Vice-Chancellor and Principal, Sir Donald MacAlister, given on 17 August 1914 after the degrees were conferred:

‘The University, recognising the national emergency which has unhappily come upon us, has sought by every means in its power to make it easier for you to serve your country, as you propose to do, in the medical profession. We wish you Godspeed whatever enterprise you may have to undertake for the good of your fellow-countrymen. We hope and believe that as doctors you will never forget that the honour of the University is in your hands, and that you will not only maintain but advance it.

'I would remind those of you who are about to serve your country in the field that your work extends not only to the wounded of your own side but to those of the other side also. It is incumbent on you as physicians and surgeons to do all you can to alleviate suffering and to preserve the life of friend or foe.’

Despite drastically reduced student and staff numbers, life at the university continued. Some of those left behind vented their frustrations at what they felt was an “Enlist or be damned” atmosphere in 1914-15, writing angry editorials in the Glasgow University Magazine:

‘In the first fortnight of August a band of stupid and inconsiderable little hussies… conducted what they called a “campaign” in aid of recruiting. Their procedure was to accost any young man in the street who chanced to be wearing mufti [civilian dress], and to present him with the popular insignia of cowardice, the white feather… But taunts from whiskered professors constitute a coldly-cultured and exquisite torture, the horror of which the authors themselves surely cannot be aware. Can these gentlemen not realise that there are personal circumstances which may prevent a man from taking his place in the fighting line? That the presence of almost every man at Gilmorehill [the University of Glasgow campus] to-day means a hidden tragedy?’ 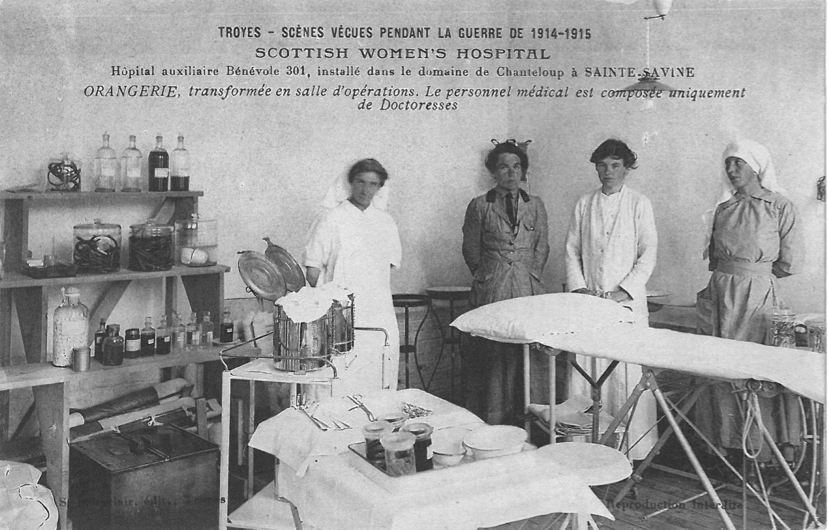 University women fulfilled a variety of roles on war service, from managing munitions work at HM Factory Gretna to running hospitals at the front and volunteering as part-time nurses at home. The university’s women’s college, Queen Margaret College, actively recruited women volunteers and collected data on their professional skills as part of the government’s call for qualified women to undertake the work of men absent on war service.

Throughout the war, the University kept track of its students, staff, graduates, alumni, and members of the University Officers’ Training Corps who were on active service. This resulted in a number of printed Rolls of Service during the war years and a final Roll of the Fallen published after the war. The chapel at the University of Glasgow, constructed in the 1920s, is the university’s memorial to those who died in the First World War. Plaques on the interior walls are inscribed the names of the 761 of the fallen. In 2005 the University Archives created an online database of the Roll of the Fallen, expanding it to include the names of nearly 4,000 more men and women who served and survived. 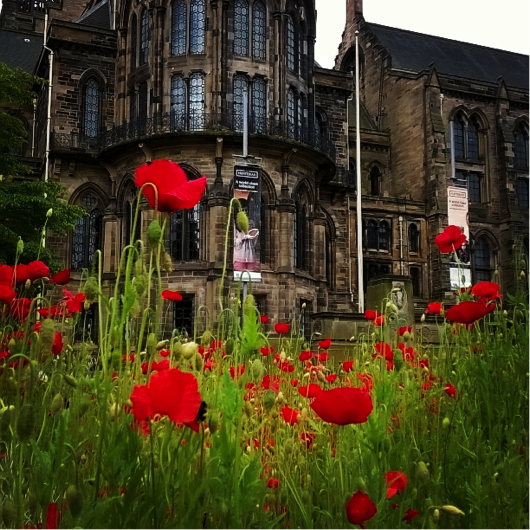 Throughout the First World War centenary, the University of Glasgow is remembering the lives of each member of its community lost during the 1914-18 conflict. Biographies are constantly being added and updated and war dead are remembered on or near the centenary of their deaths during daily morning pray services in the chapel, after which a poppy cross is planted in a First World War Memorial Garden near the main gates of the University.

For a schedule of cross plantings, check our WWI Events webpage – all are welcome to attend these events. We also tweet a link to the online profile from @GlasgowUniWW1. If you would like to contribute to our Roll of Honour by sending us a biography or photographs – or any information about a former serving student – please contact us here.

Business as Usual? Institutional impact in the First World War

This symposium brings together researchers from a variety of disciplines to examine the role of institutional involvement in an individual’s experience of the First World War. We seek to understand how corporate entities with localised institutional identities impacted participation in the First World War and how the war changed or redefined these communities. A detailed timetable and online registration can be found here.

Dr Tony Pollard is a Senior Lecturer in History / Battlefield Archaeology and Dr Jen Novotny is a Research Assistant in History at the University of Glasgow. Keep up to date on research and events by following Glasgow University’s Great War centenary project blog and Twitter feed.