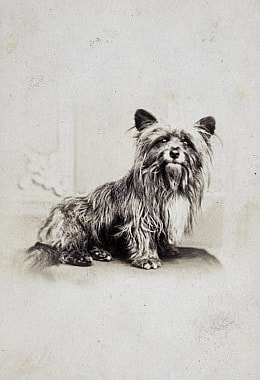 Greyfriars Bobby, the faithful terrier said to have kept vigil at his master's grave for fourteen years, died on 14 January 1872.

The Skye Terrier Greyfriars Bobby, who is said to have kept a vigil at his master's grave in Greyfriars Churchyard, Edinburgh, died on 14 January 1872.

The terrier belonged to Edinburgh policeman John Gray who died of tuberculosis in 1858. The dog is said to have followed his master to the graveside and stayed there until his own death fourteen years later, becoming a favourite with local residents, who brought him food. The monument on Bobby's gravestone reads:

Let his loyalty and devotion be a lesson to us all

Bobby was unable to be buried in consecrated ground and so was buried at the gate of Greyfriars Kirkyard, close to the grave of John Gray. Bobby is also remembered by a statue at Candlemaker Row, which is classed as a listed building - the smallest in Edinburgh.

DISCOVER MORE ABOUT EDINBURGH IN OUR 'OFF THE BEATEN TRACK' GUIDE - DOWNLOAD NOW!