Growing up in the 1930s - Scottish nostalgia My memories of growing-up during the 1930s with my brother and sister are of endless summer days blissfully playing  with lots of happy children, while my grandad attended my parents’ garden in a Glasgow suburb; with my mother and grannie hanging out washing at the same time as enjoying a gossip over the fence with neighbours.

My grandparents, who also lived in Glasgow, owned a small garret flat in Girvan, so most of July and August were spent holidaying there, much to my delight. I was totally fascinated by this tiny flat which was situated at the gushet of Glendinning and Henrietta Streets, known locally as the ‘cauld shore’ and as there were windows at each end of the main living room, it meant that I could run back and forth looking out at a road on either side of the house.

As soon as we arrived at the flat granddad took us children and a black kettle to a well embedded in a wall in Glendinning Street and filled the kettle with clear spring water to make grannie a refreshing cup of tea. Bedtimes were special as all three bairns were huddled together in one of the ‘set-in’ beds.

The following days and weeks were spent at the stair park, of course climbing up and down the stairs, or at the putting green, paddling pool or better still boating pond where paddle boats could be hired and sailed round the flower decked island in the centre of the pond. This was only on special occasions, when my father came to Girvan for a few days. 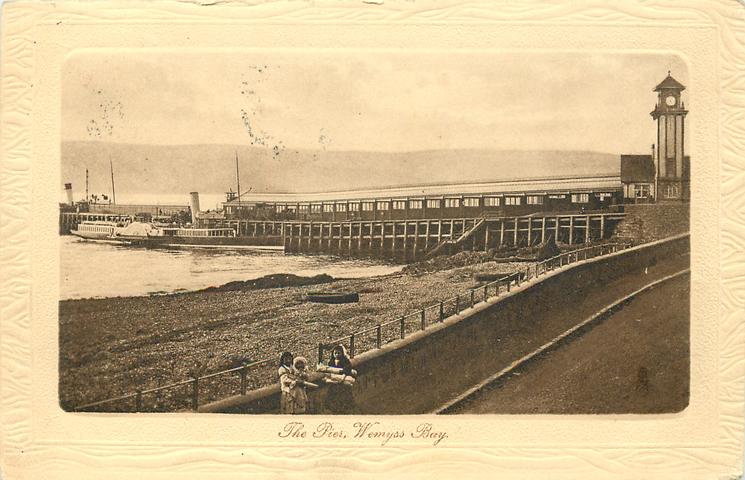 During one such holiday in 1939 calamity struck when my sister and I developed measles. As we were feeling rather poorly my father was sent a telegram to drive down to Girvan in his black and red Morris 8 car and bring us home to recover. I well remember being wrapped in an Ayrshire blanket and settled in the back seat with my sister and brother, while the blinds of the car were drawn to prevent my sister and me from damaging our eyes from the bright sunshine.

I remember my father saying ‘I’m going to drive home via the coast road as the liner Queen Elizabeth is on sea trials at the ‘tail of the bank’. This meant a longer journey but he assured my mother we might never get the opportunity to see the new ship again, as once she sailed from the Clyde she would never return.

THE COMING OF WAR

As my father drove up past Weymss Bay the sun was setting over the distant western hills, and there she was in all her glory. I distinctly remember my mother giving out a gasp of horror, saying to my father ‘Oh look, they’ve painted her battleship grey’. That meant nothing to me at that time, but I sensed foreboding in the silence that followed. The car blinds were lifted and we children were allowed one quick glance in the blinding sun to view the spectacle.

The little garret flat was sold in 1940 as it was difficult to travel from Glasgow to Girvan during wartime, and a small flat was bought in Largs to take its place.