Figures in the UK’s church buildings support charity’s Annual Review show that it received 480 applications for grants in 2017, an increase of 26% on 2016.
The increase is due to a number of factors, including the worsening funding landscape for church buildings following cuts to the Heritage Lottery Fund’s grant programmes in 2017, and the end of the government funded Listed Places of Worship Roof Repair Fund in 2016.

In 2017, the National Churches Trust awarded £1.7 million to help pay for 230 repair, maintenance and development projects at churches and chapels throughout the United Kingdom.  This was an increase of £300,000 compared to the £1.4 million it awarded in 2016. In 2017, funding from the Trust helped to remove 29 churches from the Historic England ‘Heritage at Risk’ register.
Some of the UK’s most precious Christian places of worship benefitted from National Churches Trust grants in 2017:
DUNSCORE
Presbyterian - Scotland - Grade A
Dunscore Parish Church, a Grade A listed building, received a £10,000 National Churches Trust Repair Grant to help deal with problems caused by water penetration to the walls, roof and around the windows and to restore internal plaster work.
Dunscore church was built in 1823 and is located in the centre of the village. It was designed by local architect James Thomson with a simple rectangular plan, a tower on the west gable behind the raised pulpit and a horseshoe-shaped gallery on columns. James Thomson (1784-1832) was a Dumfries architect and is responsible for the design of several important local public buildings and village churches. The church is in a prominent position and is an important landmark, surrounded by its churchyard. Dunscore has an ecclesiastical history dating back to the 12th century.
LINLITHGOW St Peter's Episcopal Church EH49 7EJ
Diocese of Edinburgh – Church of Scotland - Grade B
St Peter’s church received a £20,000 National Churches Trust Community Grant to help build an extension to the church to house kitchen, toilets and new meeting spaces.

The project will add new facilities behind the existing building: accessible entry points and a toilet at church level; a fully-equipped kitchen; a hall suitable for various community uses; a second accessible WC; and a small room suitable for one-to-one meetings.
St Peter’s is located in the Linlithgow Palace and High Street Conservation Area, slightly west of the ruins of Linlithgow Palace. The Byzantine-style building, in the form of a Greek cross surmounted by a semi-glazed dome which illuminates the whole church, sits slightly back from the street immediately opposite Linlithgow loch. The foundation stone was laid in 1927 and the church was consecrated in May 1928. Initially called St Mildred’s in honour of Bishop Walpole’s wife, its name was changed to St Peter’s in 1979. 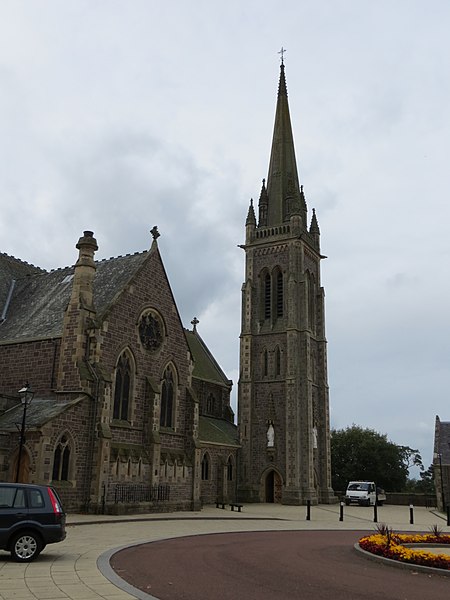 LANARK
St Mary, Lanark, Lanarkshire, ML11 7JS
Roman Catholic – Grade A
St Mary’s church, Lanark, has received a funding boost in the shape of a £40,000 National Churches Trust Repair Grant, the largest grant available, to help fund urgent roof repairs.
The project will tackle the urgent roof repairs needed at St Mary’s church. The main church roof and slates are in very poor condition and urgent need of repair. There are areas of loose, dislodged and missing slates, and previous repairs have been carried out with incorrect sizes. Lichen and moss are also a problem. The project will re-slate all roofs with the existing and new Westmorland green slates.
The church
St Mary’s is a complex of Grade A listed building in a courtyard style, with a baptistery, sacristry, presybytery and hall. The main church was built in 1856, and rebuilt in the 1910s after a fire. It is built in the Gothic revival style, out of sandstone with ashlar dressings. The main roofs are steeply pitched and finished with Westmorland green slates; the nave and transept roofs have three bands of decorative slates.
Robert Monteith began the original building, inspired by his connections with the Oxford Movement of Anglo-Catholicism. Pugin and Pugin added the reredos, the Lady Chapel, and the high altar in the nineteenth century.

Claire Walker, CEO of the National Churches Trust said: “Over the last four years the National Churches Trust the number of UK churches and chapels applying for our grants has risen substantially, with the number of applications rising from 300 in 2014 to 480 in 2017.”
“A number of factors have come together to create a tipping point for the future of many church buildings. In 2017 there was particular demand for grants to help repair and replace church roofs. This in part reflects that the roofing of many Victorian churches is simply outliving its lifespan after over 100 years of exposure to the elements.”
“We are also seeing more churches needing to replace rainwater goods. The intensity of extreme weather patterns, including heavier rainfall and storms, is putting church gutters and drains under strain and systems designed in the past cannot cope.”