India and the First World War 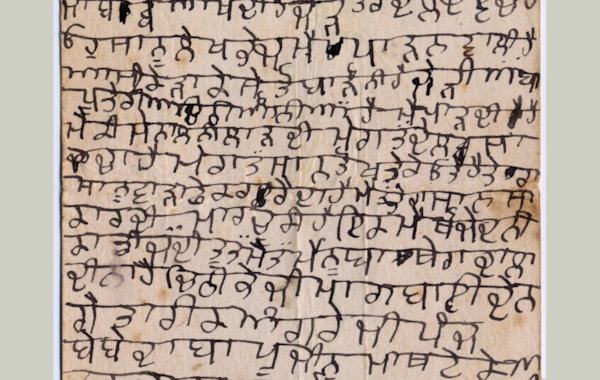 It was during a research trip to the Humboldt sound archives in Berlin in 2005 that I first encountered “that voice”. Interrupted by awkward silences and sharp intakes of breath, it crackled from an old phonograph record - plaintive, tremulous, haunting - filling in every corner of the room. He referred to himself in the third person, as he narrated his life-story in Punjabi, with the voice rising and pausing and rising again:

He would also have two sers of milk.

He served for the British.

He joined the European War.

He was captured by the Germans.

He wants to go back to India.

If he goes back to India then he will get that same food.[i]

This is the story of Mall Singh, an Indian Sikh prisoner of war in the “Halfmoon Camp” at Wünsdorf outside Berlin. The recording was made on 11 December, 1916. He was forced to stand in front of a phonograph machine held before him by his German captors and instructed to speak.

Mall Singh’s was among the 2,677 audio recordings made by the Royal Prussian Phonographic Commission between 29 December 1915 and 19 December 1918, using the First World War POWs held in Germany. Desolate, homesick and hungry, Mall Singh distils all the pain and longing into the images of makhan (butter) and the two sers [a form of measurement] of milk. Home is remembered as taste; but the image conjures up, beyond homesickness, the rural world of colonial Punjab (today divided between India and Pakistan) from where most of the Indian soldiers were recruited.

Mall Singh was one of 140,000 Indians who sailed across the kala pani or black waters to the heart of whiteness - Europe - to fight in the Western Front in 1914. Around one and half million Indians, including combatants and non-combatants, were recruited for the First World War, of whom over a million served abroad, almost in every theatre of war - from the Western Front and East Africa to Mesopotamia, Egypt, Palestine, Gallipoli and Central Asia.

Being largely non-literate, these men did not leave us with the abundance of diaries, journals, poems and memoirs that form the cornerstone of the European war memory. What we do have are hundreds of photographs, particularly from France and Mesopotamia. One of the most striking images, taken by the British Canadian photographer H. D. Girdwood as part of a stereoscopic series, shows men from the Scottish Black Watch regiment with Indian sepoys from the 41st Dogras guarding a trench [Figure 2], pointing to pockets of Indo-Scottish encounters created by the war even as it separates Mall Singh from his native Punjab.

Our main sources of information are thousands of extracts from the letters these men wrote - or rather dictated to scribes - to be sent to their loved ones back in India. The original letters are today lost. These letters were translated to English in order to be read and passed by the colonial censors and what we do have today are the censored and translated extracts from these letters, housed in the British Library.

Consider the following letter written in April 1915, after the battle of Neuve Chapelle (9-12 March, 1915), advising against further recruitment: “The black pepper which has come from India has all been finished, so now the red pepper is being used. But the red pepper is little used and the black more.”[ii] The “black pepper” refers to the Indian troops while the “red pepper” refers to the English.

Another writes more dolefully: “As tired bullocks and bull buffaloes lie down in the month of Bhadon so lies the weary world. Our hearts are breaking, for a year has passed while we have stood to arms without a rest... Germany fights the world with ghastly might, harder to crush than well-soaked grain in the mill.”[iii]

However, for me, Mall Singh's voice resonates plaintively not with these desolate letters sent home but something far more rare: a postcard written by a young girl called Kishan Devi from Punjab to her “Bapuji”, or father, Havildar Sewa Singh, of the 23rd Sikh Pioneers, serving in Egypt:

Dear Father, Ek onkarsatguru Prasad [“There is One God by the grace of the True Guru”] This is Kishan Devi. ... You are everything to me, and I worry about you. I am like a living dead without you. ...  Dear father please take leave and come to meet us. Please do come. We repeat again and again. My mother bows her head to you to pay respect. We do not have any more envelopes. ... I am sending this letter on the 22nd day of Magh and the English date is 5th. Father, please write to us... Father, please take a leave and come and meet us. Please do come. Please do reply to our letter.... Reply to our letter soon.[iv]

A child's scrawl in Gurmukhi script fills in all available space on the postcard; the words are joined together. In asking her “bapuji”  to pour out the feelings of his heart  (“jo tere dil de vich hai”), Kishan Devi touches, as we will see, a central chord in the sepoy writing of the First World War. We do not know whether it reached the father. A daughter's heart-breaking appeal (“jāroor āyin - please come”), like Mall Singh's desolate plea for butter, “repeats again and again” in the chamber of First World War memories.

These findings have stayed with me and shaped my book India, Empire, and First World War Culture: Writings, Images, and Songs. Why do they matter so much? Mall Singh’s voice, the photographs, the censored letters or Kisan Devi's fragile postcard are not just fresh and tantalising sources but open up new ways of “reading” – and writing – life, and particularly colonial lives, in times of war. In a context when these colonial soldiers have not left us with a lot of documents, it is essential to move beyond just the written and develop fresh ways of understanding the past through dialogues between images, sounds, objects and words.

These artefacts serve as lightning-rods into the varied nature of Indian war experiences: they force us to weave together a narrative of fugitive fragments, the flotsam, jetsam and lagan of life wrecked by war; they point to the importance of relicts as zones of contact between warm life and historical violence.

[iv] The postcard is owned by Avtar Singh Bahra and I am grateful to him for allowing me to use it. The letter, originally in Punjabi, is translated by Arshdeep Singh Brar.