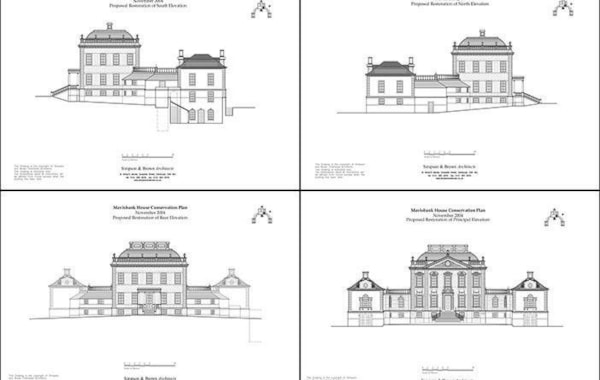 What is Virtual Heritage and what are its benefits? David Sime takes the example of the digital re-creation of Mavisbank House in Midlothian to show what can be achieved with a 'digital time travel' project.

What is Virtual Heritage and what are its benefits? David Sime takes the example of the digital re-creation of Mavisbank House in Midlothian to show what can be achieved with a 'digital time travel' project.

Scotland’s architectural heritage extends far beyond the well-known names and places to be found on the tourist trail; with literally thousands of fascinating properties dotted around the county.

But many of these properties are difficult to reach, either through remote or off grid locations or simply because of legitimate safety concerns common to ageing buildings limiting public access.

What is Virtual Heritage?

This is where Virtual Heritage - applying digital technology such as virtual reality to cultural heritage - creates opportunities for access and exploration which until now were impossible.

Using cutting edge 3D scanning and modelling techniques, structures of any kind can now be recreated in the virtual world, allowing anyone with a computer and an internet connection to explore and learn in complete safety – and from anywhere in the world.

The accessibility and safety benefits of this alone make it a game changer in the heritage field, and this is not to mention the ability to “snapshot” at risk properties as they are, preserving their form digitally against age, natural or manmade destruction for the enjoyment of future generations.

But what can even this technology do when the property itself is already partially or even completely ruined? More awkward still, what if access to such a property is restricted, preventing the gathering of any data directly from the original structure?

These were the challenges that met Stephen S Wright, a Scottish heritage enthusiast, in his efforts to capture Midlothian’s Mavisbank House for posterity.

Now visual effects manager for the multi award winning Scottish VR company Oncor Video, Stephen was then an undergraduate student in his final year looking to incorporate his passion for historical architecture within his honours project.

This was to be an illustration of “Serious Gaming”: the real world, functional applications of Virtual Reality and other computer games technologies, and the property in question was a perfect subject for the study – but not without its problems.

Mavisbank House, which had been heavily damaged by fire in the early 1970s, was in a dangerous condition and, as such, protected from unauthorised access by a high ring of impassable fencing.

To add to this, the trustees of Mavisbank had not been able to grant Stephen timely access to the area for him to carry out the vital measurements, laser scanning and reference image gathering he required to complete his project.

Without this vital data, Stephen had to implement a pre-prepared contingency plan which was very different and considerably more difficult to achieve - however, he was not without help...

In 1987 there were plans to demolish Mavisbank House by Midlothian Council. These efforts were stopped by the actions of one man, the specialist heritage architect and conservationist, Dr James Simpson OBE. His firm, Simpson and Brown Architects, had generated detailed architectural models of the building in the hope of restoring the 300 year old Palladian property it to its former splendour.

Working closely with Dr Simpson, Stephen was able to combine these blueprints with the plethora of antique photographs and paintings the building had accumulated over it’s 250-year existence, to piece together a detailed model of the early neoclassical building.

Over a period of six months, Stephen painstakingly recreated every inch of the building’s exterior, from its oak doors to its many limestone balusters, even completely “re-building” the almost entirely destroyed east and west wings of the property.

The result was this magnificent virtual model, which allowed visitors to walk around the grounds of the property, examining it in a condition it had not seen in reality for over 45 years.

As the interactive technology for virtual reality develops apace, models like these do not only allow the user to see the property, but also to touch them, hear their unique acoustic properties, even smell them through a technique called “olfactory haptics”.

What’s more, the bulky headsets we commonly associate with virtual reality are shrinking fast, and through a process called “Projection Mapping”, realistic images of buildings and places past can be projected onto their contemporary location, creating virtual reality without any headgear at all.

Perhaps the most valuable benefit of the efforts of experts like Stephen, will be the ability through large scale 3D printing to physically recreate buildings down to centimetre or even millimetre accuracy. This means that damaged or destroyed buildings and monuments can be rebuilt, partially or fully, using 3D Virtual models like Mavisbank as their guide.

And this was just the start for Stephen – now applying his skills to commercial and industrial projects and using sophisticated LiDAR (Light Detection and Ranging) scanning devices, he has been able to build much larger, more detailed and more accurate models in a fraction of the time.

In collaboration with antique paint effects specialist Lindi Wright, Stephen now has plans to model a historic property both inside and out, allowing virtual visitors to enter the building, move from room to room, view and even interact with books, paintings and people within the space.

If you know of a property which would be suitable for this treatment, please don’t hesitate to get in touch.