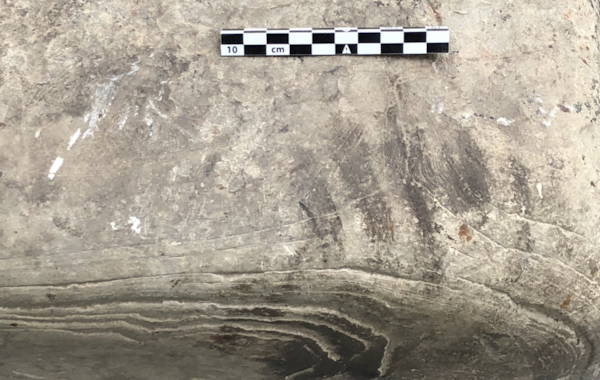 Archaeological excavations on the Orkney Island of Rousay have revealed the 'unparalleled remains' of a Pictish smith’s workshop, complete with the carbon imprints of a copper smith's hands and knees.

Archaeological excavations on the Orkney Island of Rousay have revealed the 'unparalleled remains' of a Pictish smith’s workshop, complete with the carbon imprints of a copper smith's hands and knees.

The small cellular building discovered by archaeologists on Rousay dates to a period between the 6th to 9th century AD and was semi-subterranean. It was entered via steps and a curved corridor, which would have minimised the amount of light entering the smithy, allowing the smith to assess the temperature of the hot metal based on its colour.

A door would have separated the workshop from the corridor. Many of the stone fittings - the pivot stone, door jamb and bar hole - remained intact. The centre was dominated by the hearth, with a set upright stone on the doorward side protecting the hearth fire from drafts.

Dr Stephen Dockrill (University of Bradford) explains the findings: “Work by archaeometallurgist Dr Gerry McDonnell, including analysis of crucible fragments and the floor deposits, has demonstrated that a copper smith worked in the building. The analysis of the floor enables us to say with confidence where the smith worked, next to a hearth and two stone anvils. The biggest surprise came when we lifted the larger stone anvil and cleaned it; we could see carbon imprints of the smith’s knees and hands.”

The Pictish workshop is part of an excavation project directed by Dr Julie Bond and Dr Stephen Dockrill (both of the University of Bradford). The building is part of a substantial Iron Age settlement which is being destroyed by the sea. Work this year has centred on the Pictish workshop and a Neolithic Chambered Cairn which is also being eroded.