A series of stained glass windows, which chart the history of Shetland from the 9th to the 13th century are undergoing expert conservation as part of the restoration of Lerwick Town Hall.

A series of stained glass windows, which chart the history of Shetland from the 9th to the 13th century are undergoing expert conservation as part of the restoration of Lerwick Town Hall.

The windows, created for the opening of the Town Hall in 1883, were made by James Ballantine and Cox & Son, Buckley, and cover five centuries of Shetland history, incorporating Norse occupation and ending with the marriage of Margaret of Denmark to James III. A number of windows were donated by Amsterdam and Hamburg, to commemorate international trading connections. 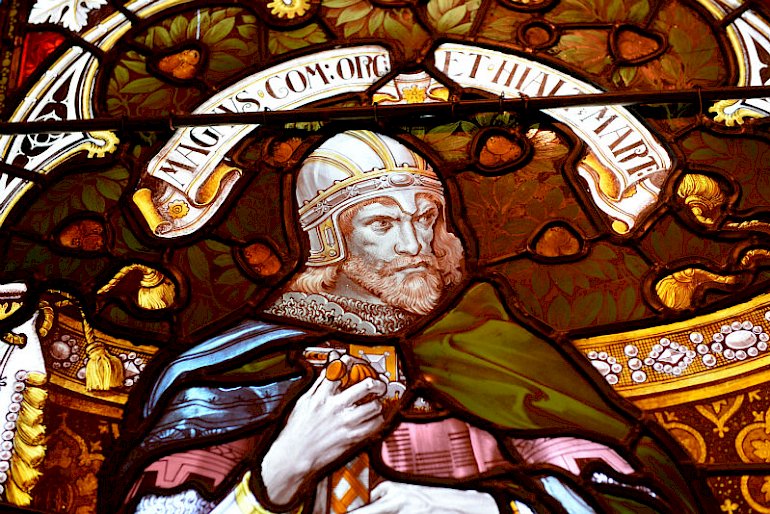 The Lerwick stained glass is recognised as among the finest secular stained glass in the UK, and combines Scottish, European and Scandinavian heraldry. Over the years, the stonework around the windows has eroded, meaning this now needs replacing, whilst the glass is being conserved for future generations by Glasgow firm Cannon MacInnes Stained Glass, who have set up a temporary glass studio in Lerwick.

Glass specialist Linda Cannon said of the work: “The first stage is to get the windows out and to store them safely, and then to go through them all, one by one, to identify where the problems are; deal with the problems; stack them again, safely, so they’re all done, clean and ready to be framed.

"We’ve got new frame channel being hand-made for us in Switzerland, so we have to get that shipped over. We’re making new, non-ferrous framing, secondary to that, in the studio. Once the stonework is renewed, we can get sizes for the secondary glazing, and that will be sent up.”

The work is due to be completed by early summer, when the town hall will reopen to the public. 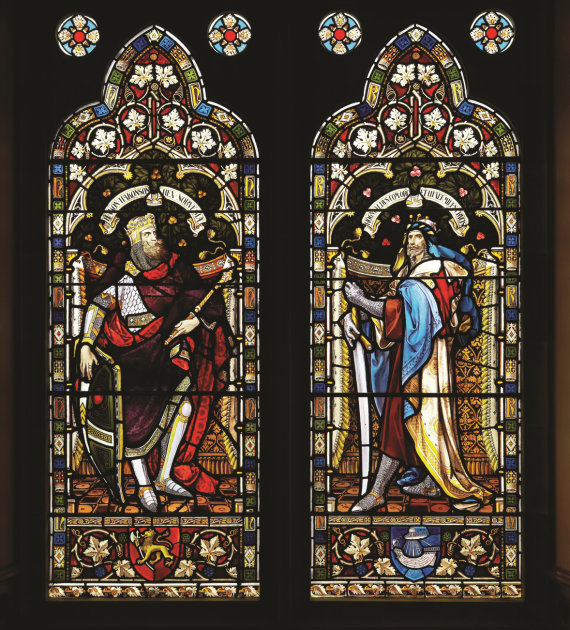 The left-hand figure represents Hakon Hakonson the Old, King of Norway from 1227 to 1263. In that year he sailed west to revenge Scottish attacks on the Western Isles, but was repelled by the Scots at the battle of Largs, then retreated to Orkney, where he later died. The right-hand figure showsRognvald, Earl of Orkney and Shetland from 1136 to 1158. He was known as Rognvald the Crusader after a visit to Palestine. Rognvald was nephew of St. Magnus, and founder of the Cathedral in Kirkwall. 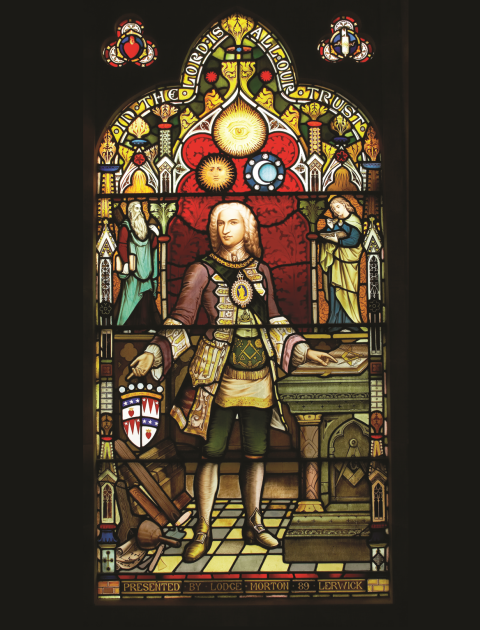 The main feature of the stairway leading to the town hall's main hall is the masonic stained glass window, which shows Lord Aberdour (afterwards Earl of Morton, Grand Master Mason of Scotland) delivering a lecture on Freemasonry.

The brass plate below the window commemorates the refurbishment of its stonework, commissioned by Lerwick Lodge Morton no.89 in the centenary year, 1983.

Other notable windows in the set include a Lerwick Harbour Trust window, showing a harbour scene with ships; a Lerwick Up Helly Aa scene, commemorating one of the town's best-loved annual traditions; and a rose window, containing the arms of Denmark, Iceland, Sweden and Oldenburg, as well as the arms of the Shetland families Cameron of Garth, Bruce of Sumburgh, Leask of Sand, and Edmonston of Buness.

With thanks to Charlie Simpson for the window descriptions, which are taken from his book Lerwick Town Hall: A Guide.

For more on Lerwick Town Hall, visit their website.